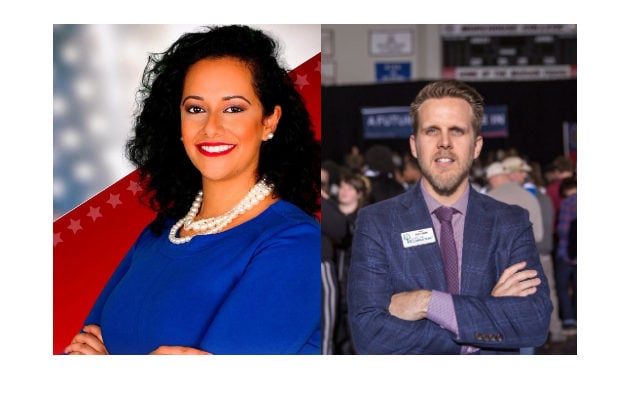 DeKalb County, GA — District 6 County Commission candidate Ted Terry has apologized after the public airing of his private complaints about an endorsement of his opponent, Maryam Ahmad.

Ahmad and Terry will be on the ballot in the Aug. 11 runoff to be the Democratic nominee for DeKalb County Commission Super District 6. There are no Republicans running for the seat and the winner of the primary will replace outgoing Commissioner Kathie Gannon. Super District 6 encompasses the western half of DeKalb County. If the primary is any indication, it’s going to be a close race. Terry received 37.6 percent of the vote in the primary and Ahmad received 34.6 percent.

Here’s a copy of the email forwarded to Decaturish: 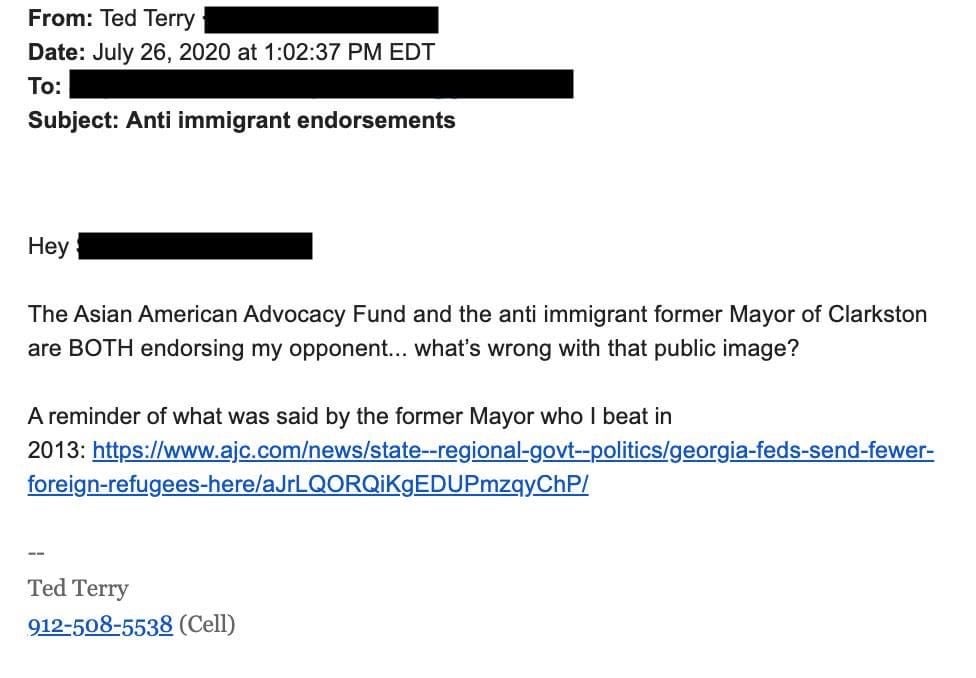 In the email, he links to an Atlanta Journal Consitution article about former Clarkston mayor Emanuel Ransom asking the federal government to lower the number of refugees sent to Clarkston. But Ransom didn’t endorse Ahmad. He endorsed Emily Halevy, who didn’t garner enough votes to make the runoff.

Terry’s email made its way back to the leadership of the Asian American Advocacy Fund, and they were not happy being described as “anti immigrant.”

“In his outreach to our community, Terry intentionally conflated our endorsement with that of a former Clarkston Mayor who has been quoted to have made anti-immigrant remarks about the refugee community in Clarkston and Georgia,” the group said. “The Asian American Advocacy Fund does not share the views of the former mayor and we condemn Ted Terry’s attempts at spreading misinformation.”

“It was so messy and it didn’t have to be that way,” Mahmood said. “He has since apologized. I’m not sure what resolution we’re coming to, he has apologized publicly on our page. I’m trying not to make a big deal about this anymore.”

In response to the Facebook post, Terry said, “I’m really sorry … it wasn’t intended to be a public critique. It was a personal communication to my friend. In no way did I intend to or would ever suggest that Asian Americans Advancing Justice was conflated with the anti-refugee former Mayor. I’m sincerely sorry for the poor choice of words.”

In a subsequent reply, he apologized for misidentifying the group as “Asian Americans Advancing Justice” in his initial apology.

Mahmood said Terry could’ve called her directly about his concerns. When asked why the Asian American Advocacy Fund endorsed Ahmad, Mahmood said it wasn’t anything personal against Terry.

“We had no problems with Ted,” she said. “This was about supporting someone who we think could be a really good representative for her community. Ted had no issues in terms of his policy positions. It was more of what could he bring as an individual. We’ve got someone who is from our community. Let’s see if we can support her and help her get elected. We never thought that someone would be upset about that. We literally are an Asian American organization. It’s almost implied in our name. If they’re good on our issues, that’s what we would want.”

In a follow-up interview, Terry said he has a high opinion of the Asian American Advocacy Fund.

“I have nothing but respect and admiration for the leaders of the Asian American Advocacy Fund and no matter what happens, I hope to work with them in the future as I have the last six years,” he said.

Ahmad was ticked off by Terry’s email, too. Her parents immigrated from Pakistan and she was raised in Clarkston and Stone Mountain.

“I could care less about what he says about me. I really don’t care,” Ahmad said. “Why I’m so pissed is because of what he’s saying about [the Asian American Advocacy Fund]. I know they’ve been doing such great work. Any issue going on for any marginalized community, they involve themselves with.”

Halevy, the third candidate in the District 6 race who didn’t make the runoff, also weighed in on the controversy.

“I was incredibly disappointed to learn of the behavior of one of my former opponents upon not receiving the endorsement from the Asian American Advocacy Fund. Bullying tactics should never be tolerated, certainly not by our candidates and elected officials, and certainly not towards our immigrant and refugee communities,” Halevy wrote in a Facebook post. “As I have told both candidates, I will continue to hold whoever is elected accountable for their actions and to the people of DeKalb County. Behavior such as this has no place in leadership.”

Here is the full post by the Asian American Advocacy Fund: