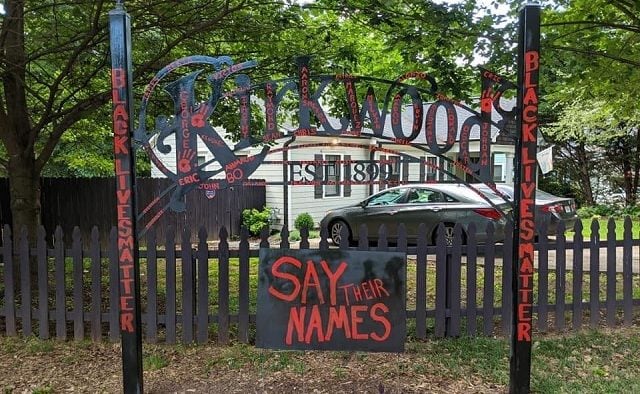 Atlanta, GA – At its July 10 meeting, the Kirkwood Neighbors’ Organization voted in favor of a resolution opposing the use of Long Range Acoustical Devices (LRADs) by law enforcement, and to present a letter to Mayor Keisha Lance-Bottoms stating their opposition. The resolution states that because there is evidence that LRADs cause permanent hearing damage, that LRADs are a cause of litigation for which taxpaying residents of Atlanta would bear the cost, and that the ACLU recommends suspension of their use,

NOW THEREFORE, the Kirkwood Neighbors Organization resolves as follows: We petition the Mayor of Atlanta, Keisha Lance Bottoms, to order the Atlanta Police Department to cease the use of LRAD technology until further evidence can be provided of its safety and effectiveness to the citizens of Atlanta.

The letter was in response to the use of an LRAD on Cherokee Avenue in Grant Park on June 14 and is part of an ongoing discussion of police use of force both nationally and in the city of Atlanta.

In her report to KNO, Atlanta City Councilmember Natalyn Archibong wished to quell any rumors that the city council was considering defunding the Atlanta Police Department.

“Nobody on the city council is in favor of defunding the police in any form. The failed amendment that has gotten so much attention was about sequestering some funds for police reform, but at no time was there any council member who wanted to take any dollars away from personnel, from benefits, or from pension,” said Archibong.

The city will seek funds for police reform initiatives from elsewhere in the city’s general fund or reserves. “There is a new piece of legislation that is called the Rayshard Brooks bill looking for $73 million but not from the police budget.” added Archibong.

Archibong stated that Mayor Bottoms has issued executive orders requiring face masks inside city limits and putting the city back at Phase One.

“What that means is that at City Hall or any public there are no gatherings, particularly no gatherings of more than ten people. For that reason City Hall and all city facilities are remaining closed,” said Archibong.

“I just want to emphasize that our cases in Atlanta are spiking and hospital capacity is below fifty percent which is a definite point of concern, so I just want to urge everyone to stay as safe as possible and stay home if you can,” said Archibong.

State Representative Bee Nguyen echoed concerns about rising case numbers and the difficulty of getting tests.  “It has been extremely challenging to get a COVID test lately. I’m trying to find out from the Governor’s office exactly what’s going on,” said Nguyen.

More people are seeking tests, which is overwhelming the capacity of existing labs. In addition, Nguyen said, the National Guard had been helping with testing at one point but are no longer doing so.

“We’re a little bit unclear about why these decisions are being made,” said Nguyen.

Nguyen said the city is still in the first phase of the COVID-19 pandemic.

“We do know the numbers are going up. We are still are in the first phase of COVID, we were never able to get our numbers to where we could even be calling this a phase two spike,” said Nguyen, adding that while Atlanta and other cities have taken new steps to close public spaces and mandate masks, Gov. Brian Kemp’s emergency order asserts executive control over pandemic measures in Georgia and seeks to prevent cities and counties from making their own decisions.

Tina Davis reported that the Community Outreach Committee, formed for the purpose of anti-racist outreach, had its first meeting with strong attendance.

KNO raised $4,100 with the sale of Juneteenth signs.  The committee plans to hold a Juneteenth event in 2021, and in the meantime will be holding professionally facilitated listening sessions and discussing the ways that new neighbors can be acclimated to the neighborhood.