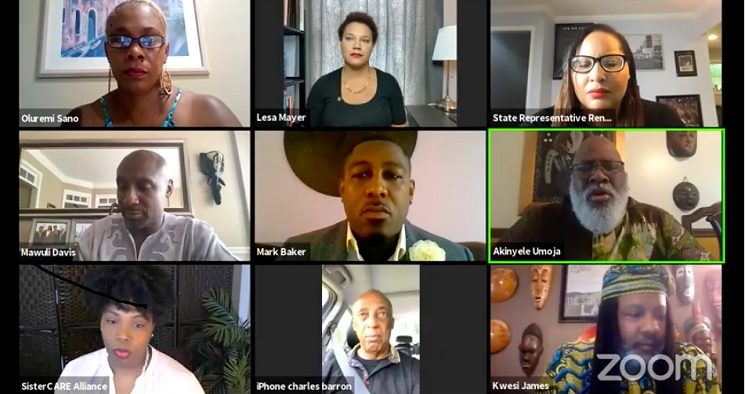 The panel, moderated by Mawuli Davis of the Beacon Hill Black Alliance for Human Rights, discussed the importance of reparations currently, legislative proposals and community engagement.

“Reparations is a process of repairing, healing and restoring a people injured because of their group identity and in violation of their fundamental human rights by governments, corporations, institutions and families,” the N’COBRA website says.

The N’COBRA website also says those injured groups have the right to obtain what they need to repair and heal themselves from the government, corporation, institution or family responsible for the injuries.

Reparations could include cash payment, economic development, land and repartition resources, according to the N’COBRA website.

To begin the discussion, legislators discussed the importance of reparations at this moment in history as the Black Lives Matter movement is gaining momentum.

State Rep. Renitta Shannon said that there is much built into policy that is built for the people who have been able to vote the longest, which is white people.

“Black people built this country and we continue to make it what it is today. This country owes us frankly,” Shannon said. “There is so much work to be done for our communities and you cannot be afraid to advocate for Black people loudly, directly and in all the work that you do.”

During the discussion, Davis said that Decatur historically had a larger Black population but it has declined due to gentrification.

Decatur City Commissioner Lesa Mayer agreed, adding that she has seen the Black population dwindle over the 16 years she has lived in the city.

“I live in a community that appears from the outside to be completely picturesque,” Mayer said. “We have the best schools. We have lovely homes. We’re a walkable community. The problem that we have is that we used to be a diverse community.”

The legislators also discussed reparations proposals and how Georgia could move forward with that legislation.

One strategy in New York is to create a community commission on remedies.

“They have the charge of saying how much, what form and who is eligible to receive it,” New York Assemblyman Charles Barron said.

Alderwoman Robin Simmons of Evanston, Illinois, introduced reparations legislation in 2019 to an equity and empowerment commission. She is also the chairwoman of a reparations subcommittee.

The example she gave for funding reparations came from the sales tax on cannabis. Illinois legalized the sale and use of recreational marijuana in June 2019. The city of Evanston has dispensaries and the sales tax is at 3%.

Simmons asked for study and found that 71% of cannabis arrests were Black residents while Black people make up 16% of the city’s population, she said.

“With that, we had an opportunity, a window and a need to fund reparations,” Simmons said. “It was my recommendation that we advance funding reparations with the sales tax from cannabis. We passed the first $10 million of cannabis sales tax will fund reparations. Of course, the goal is that we expand that but we can at least start the work with $10 million.”

The city is also working on establishing a reparations stakeholder authority that is made up of exclusively Black residents of Evanston who can speak to the damages, the trauma and the remedy.

The city of Decatur has not discussed reparations and Mayer acknowledged that she hasn’t started those conversations and is committed to becoming more educated in order to do so. She also said that the suffering of the Black community needs to be recognized.

“As we work to try to figure out how we implement plans for reparations of this suffering it is very important for our allies, who say they are willing to do the work with us, to acknowledge the true and deep suffering that we have had in our community for generations,” Mayer said.

She added that the city would have to look back at several generations and not just the youngest generations.

“While we are here in Decatur, we need to make sure that while we have a very ally-rich community that our allies are willing to do real, meaningful work and have the tough discussions to make sure that we implement changes that actually continue and go back so that we can actually stop these patterns of pain,” she said.

Mayer also discussed supporting Black-owned businesses and would like to see a mechanism to help support and sustain the businesses once they are open.

“Black business ownership is not very common in our community. The support of Black business has been less common” Mayer said. “We need some sort of system in place that helps to eliminate all of the previous systemic issues that have prevented the success of Black-owned businesses so that those businesses can thrive once opened.”

Shannon said that she is looking at different elements that would be part of an overall reparation package. One issue she is working on is maternal mortality as Black women are three to four times more likely to die from complications from pregnancy or birth, she said.

Shannon has worked to expand Medicaid for new mothers in order to reduce the amount of deaths. She said that this year the state expanded Medicaid to cover new mothers from 60 days to six months after giving birth.

Additionally, Shannon is working to hold police accountable and is sponsoring legislation to do so. For example, she has worked on a bill with Davis that would create a database and provide public accountability for use of force by police.

During the discussion, South Fulton City Councilman Mark Baker said he plans to introduce his reparations legislation in September.