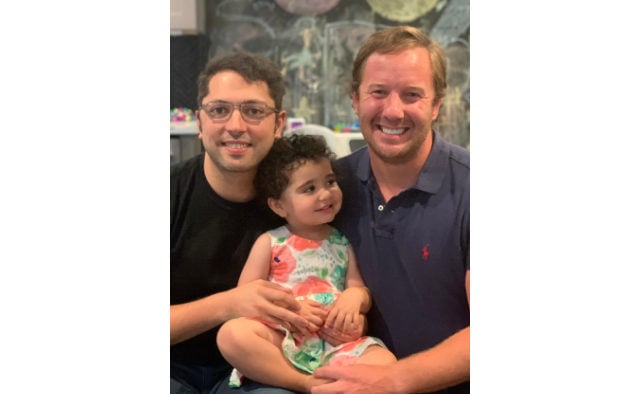 Derek Mize and Jonathan Gregg are the parents of Simone Mize-Gregg. Image provided to Decaturish
Share

Decatur, GA — A gay Decatur couple has won a lawsuit filed against the U.S. State Department after officials denied citizenship for their daughter.

Derek Mize and Jonathan Gregg are the parents of Simone Mize-Gregg. According to Lambda Legal, they had their daughter Simone via surrogacy in England in 2018, and both fathers are listed on her birth certificate.

“When they applied for recognition of her U.S. citizenship, the U.S. consulate in London rejected their application,” a press release from Lamda Legal says. “Because only one of Simone’s fathers has a biological connection to her, the State Department disregarded Jonathan and Derek’s marriage and treated Simone as though she was born out of wedlock, a classification which requires more stringent requirements for recognition of her citizenship.”

Mize said this happened in April 2019 and told Decaturish the State Department’s decision was based on “a questionable policy that doesn’t allow two men to have children born abroad and their citizenship be recognized.”

“Judge Michael Brown ordered the State Dept to recognize our daughter as a US citizen,” Mize said. “We are obviously very happy and relieved — the whole ordeal took a toll.”

Lamda Legal also was happy to notch a court victory on behalf of an LGBTQ couple.

“Today’s court decision is a resounding victory for LGBTQ families. The court has declared baby Simone, the marital child of Derek and Jonny, to be a U.S. citizen since birth and ordered the State Department to issue her a U.S. passport. We are very pleased the court found that the agency’s policy was irreconcilable with the law and our Constitution’s guarantee to equality because it treated the children of married, same-sex parents differently from the children of other married parents,” said Omar Gonzalez-Pagan, Senior Counsel and Health Care Strategist at Lambda Legal. “This is the second federal court this summer to rule against the State Department’s policy to treat children of married, same-sex parents as children ‘born out of wedlock’ and not entitled to birthright U.S. citizenship. It is time for the federal government to stop defending this unlawful and unconstitutional policy. No family should have to face the fear and uncertainty of having their child’s citizenship status be held in limbo.”

“We celebrate the court’s decision, which acknowledges what has been true since the day she was born,” said Aaron C. Morris, Immigration Equality Executive Director. “Simone Mize-Gregg is a citizen of the United States. Today’s decision in Georgia reaffirms what every other federal court who has heard this issue has held: family means more than biology alone. The State Department should change its discriminatory and unconstitutional policy immediately before it hurts another family.”

For more information from Lamda Legal about this case, click here.