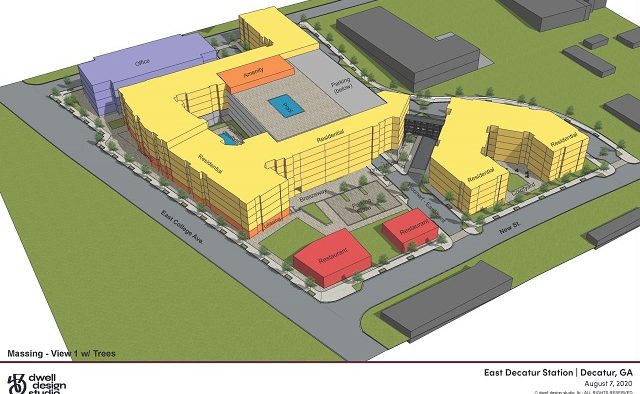 A concept drawing for the East Decatur Station Mixed Use project. Image obtained via the city of Decatur. (A larger version of this drawing appears at the end of this article.)
Share

Decatur, GA — Real estate developer Northwood Ravin is under contract with the property owners of East Decatur Station to redevelop most of the block along East College Avenue between Sams Street and New Street into a mixed-use residential, restaurant and office space complex.

The new development would include 329 residential units — a mix of one, two and three-bedrooms, with an estimated 20 percent of the units to be reserved for buyers with an income of 80 percent of the area median income (AMI) or lower.

But in order to make the project financially feasible, representatives say, they will need some exceptions to Decatur design standards for buildings in that part of the city.

“We anticipated this [the city’s passage of an inclusionary zoning ordinance] and our underwriting is with the intention of including affordable housing,” Jay Silverman, managing principal with Dwell Design Studio, which is working with Northwood, told members of the Downtown Decatur Development Authority (DDA) board on Friday.

In keeping with Decatur’s recently adopted inclusionary zoning ordinance, new housing developments of at least five new units must set aside at least 10 percent of the units as affordable for those with incomes at or below 120 percent of the area median income (AMI). For rental units, the affordable housing units must be accessible to those making 80 percent of AMI or lower. The city will annually re-evaluate its affordable housing income limits, pegging it to the income limits used by HUD for the  Atlanta-Sandy Springs-Marietta Metropolitan Statistical Area. Currently, the AMI for this metro area is $82,700 for a family of four. This year, 80 percent of AMI for a family of four in metro Atlanta is $66,160.

Silverman and Ben Yorker from Northwood Ravin appeared before the DDA to request their support for the needed design exceptions. Because the development is located in one of the city’s commercial corridors, requests for variances or exceptions are considered by both the DDA board and the city Planning Commission before going before the Decatur City Commission.

In addition to the setback exception, the developer is seeking variances to some street parking requirements as well as a variance allowing the internal parking deck to have slightly smaller parking spaces than the Decatur development ordinance calls for.

But the major sticking point for the DDA board members on Friday seemed to be the request for a deviation from the step-backs.

“The idea behind the [standard] is to avoid the massing right at the street,” noted DDA Board Chair Chris Sciarrone. “On College, I don’t think it is that much of an issue. You have the railroad on the other side and a four-lane corridor. But you also have buildings facing Freeman and Sams, which are much smaller streets.”

Yorker noted that the Cortland Decatur East development, which is adjacent to this property, also received the same exception to allow it to construct the buildings without stepping back any from the front of the facade.

The total building heights are between 50 and 60 feet in height, so would not be much above the 50 height limit for not needing a step-back and well within the 80-feet height restriction for that area, Yorker said.

“If you do the setbacks on the other streets, running east-west, then it only affects six units -four on top and two on the bottom,” he added.

The board members voted to table consideration of the exceptions until the September meeting to give members more time to consider the requests in detail.

“I don’t want to seem like I am against the project,” board member Lisa Turner said. “I just need more time to look at this and understand why you can’t build this without the exceptions.” 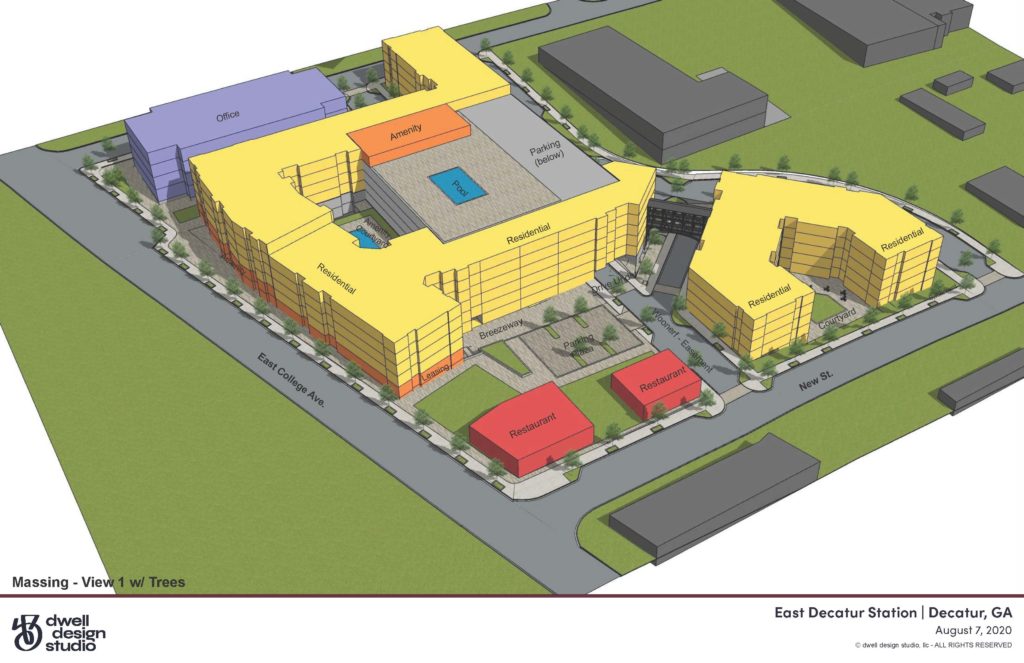