The approximate location of the work on Green Street. Image obtained via Google Maps.

Decatur, GA — Contractors working for DeKalb County as it upgrades the sewage system on Green Street in Decatur are removing 21 mature trees to accommodate the work.

The project is necessary because Green Street is one of the worst sewer spill sites in the county, with at least 22 spills since 2012.

Environmental advocates say the county plans to replace six trees and say the city is ignoring its own laws which require a city stream buffer variance for work done within 25 feet of a stream, in this case, Shoal Creek. Following the publication of this story, the city reported the county will be replacing 15 trees, not six. The advocates agree the sewer project will be a good thing but question whether the county needed to remove so many trees in the process. 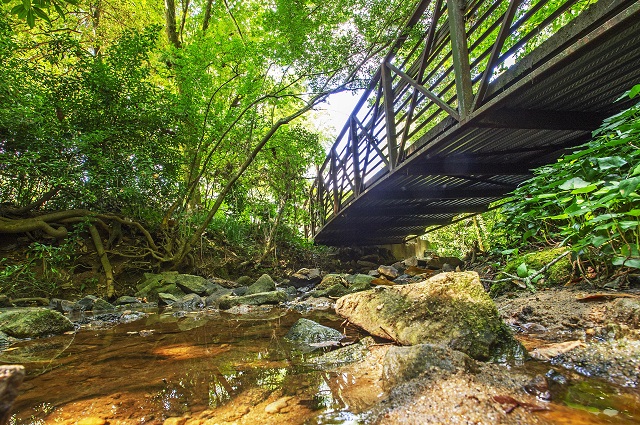 But the city says the project is exempt from these requirements because it’s utility work occurring within an existing easement.

“Therefore, [DeKalb Watershed Management] was not required to obtain a stream buffer variance from the city for this project,” City Manager Andrea Arnold said. “However, the [DeKalb Watershed Management] did have to apply for and obtain a different type of stream buffer variance from the State Environmental Protection Division under Section 9.4.4 of the [Unified Development Ordinance’s] soil erosion and sedimentation regulations.” A notice on Green Street of an April 10, 2020 sanitary sewer spill into Shoal Creek. Photo by Dean Hesse.

“Per DeKalb County Code of Ordinances, which is based on industry standards, trees are not allowed within sewer easements for maintenance purposes,” Cauthen said.

Miller believes the city is violating the following section of the UDO (emphasis added):

Public sewer line easements paralleling the creek, except that all easements (permanent and construction) and land disturbance should be at least 25 feet from the top of the bank. This includes such impervious cover as is necessary for the operation and maintenance of the utility, including but not limited to manholes, vents and valve structures. This exemption shall not be construed as allowing the construction of roads, bike paths or other transportation routes in such easements, regardless of paving material, except for access for the uses specifically cited in Sec. 9.2.4.B.1. above.

He said if the city and county wanted to claim an exemption for an existing easement, they would’ve needed to stay within 10 feet of the sewer line according to the county’s permitting documents and the city’s Unified Development Ordinance.

“They are now saying it’s subject to an exemption for construction ‘within’ an easement — but the facts don’t hold up,” Miller said. “I can tell you from being out at the site with my tape measure that the cleared area is way more than 10 feet wide — probably 20-50 feet depending on the location. So the city’s ‘easement’ rationale doesn’t seem to hold water. And it’s still strange and troubling they are looking at every exemption except the one that protects the environment and promotes the actual purpose of the stream buffer law.”

Contractors working for the county visited the site on Sept. 8 to remove more trees and were met by Miller and Maria Moore Riggs, a homeowner living along Shoal Creek. When they questioned whether county contractors had the appropriate permits, they halted their work and said they would consult with the county’s attorney. 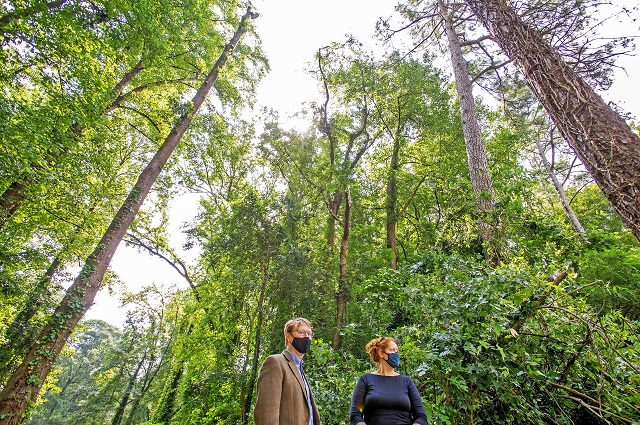 A tree on left that contractors planned to remove on Sept. 8, 2020, looms above Oakhurst resident and environmental attorney Ash Miller on left, and Maria Moore Riggs, a homeowner who lives along Shoal Creek. Photo by Dean Hesse.

“As a citizen and a property owner, I’m concerned [with] how the contractors are being held accountable for protecting the stream while this work is going on and how the city does not appear to be following its own rules regarding enforcement of requiring permits for work being done within 25 feet of a stream,” Riggs said.

Miller said it was his understanding that no additional trees would be removed other than the ones the county already took down.

“So when we saw trees being chopped down, we came out,” he said.

Miller said the tree removal needs to stop and said a variance hearing could’ve brought to light other alternatives besides tree removal.

“We are calling on the city to enforce its own laws to protect the stream,” he said. “The goals of this project are great … but the way it’s been conducted is, in my view, unlawful, illegal. They have chopped down too many trees unnecessarily and have not replaced them as required by city law.” A view of work done for the Green Street Project. Photo by Dean Hesse.