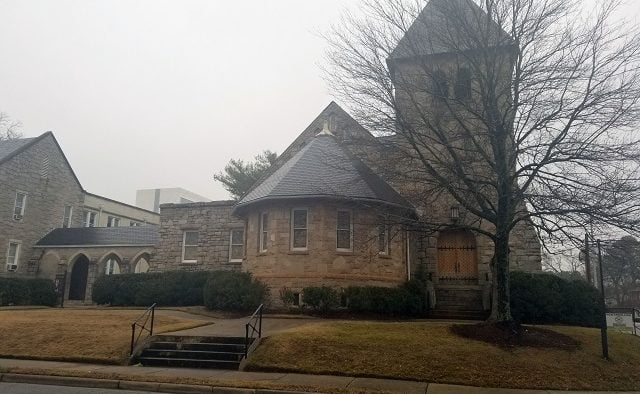 The stone chapel of Decatur First United Methodist Church at the corner of Sycamore Street and Commerce Drive. Photo by Cathi Harris
Share

Decatur, GA — Plans to repurpose part of the Decatur First United Methodist Church property for office and event space moved one step closer to fruition Wednesday as the Decatur Planning Commission voted to recommend approval of a rezoning for the church’s former chapel and Sunday School building.

WT 318 Sycamore, LLC, a partnership organized by Decatur attorneys Kyle Williams and Eric Teusink, is under contract to purchase the properties from the church. They plan to convert the school building, which formerly housed Decatur First Kindergarten and Preschool, to office space and renovate the historic 1899 stone chapel as a meeting and event space.

“Other than repair and renovation, we are not changing anything with the chapel,” architect Andrew Rutledge told the commissioners. “It will be used primarily by the owners for their professional conferences and rented on the weekends for weddings – much the same way it is used by the church. We are adding an elevator and an elevator lobby to the rear of the school building.”

The addition of the elevator is needed to make the building accessible and comply with the federal Americans with Disabilities Act.

At issue is that the chapel and school building are both zoned R-60 – single-family residential- on the city’s zoning map, despite never having had a residential purpose. The city’s land use map also lists the properties as RL – low-density residential.

The new owners would need the city to agree to a rezoning to C-2 – general commercial, a change in land-use designation to commercial/high-density residential, and a special exception to the downtown district’s parking standards to allow for the adaptive re-use of both buildings. 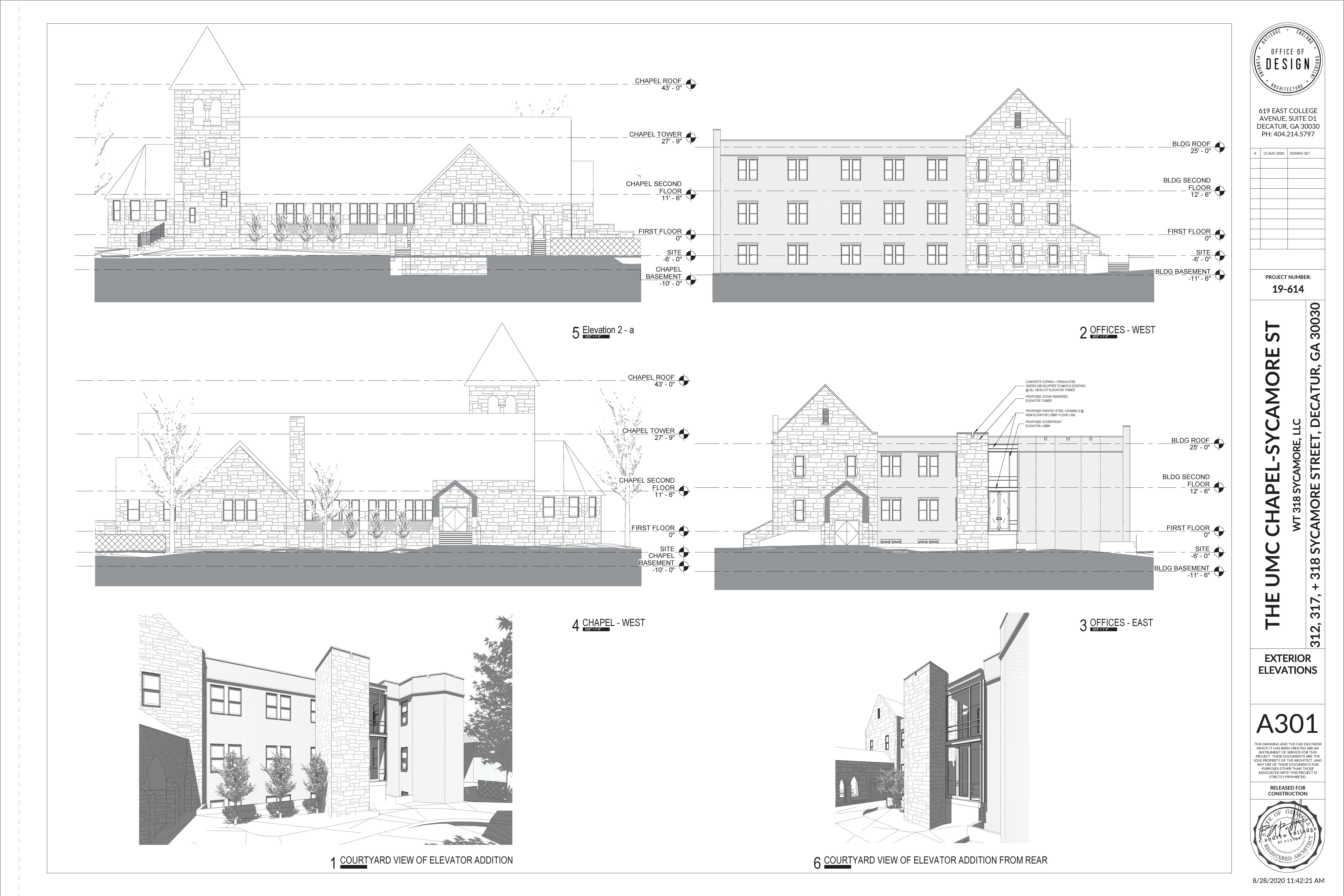 Architectural drawings show the plans for the adaptive re-use of the 1899 former Decatur First United Methodist Church chapel and Sunday School building. Image obtained via the city of Decatur

Decatur’s Unified Development Ordinance prohibits surface parking lots within 60 feet of a public road in that downtown area. There is an existing lot behind the chapel, currently configured as a playground for the preschool, that is adjacent to Commerce that the new owners would like to use in order to provide sufficient parking for the office space, Rutledge said.

The change in zoning and land-use designations would make the properties consistent with the surrounding properties, which are either zoned Commercial or as PO (Professional/Office).

At an earlier meeting, the Decatur Downtown Development Authority (DDA) board passed a resolution in support of the rezoning request, noting that the redevelopment of the property would add to the city’s tax base and provided sought-after additional office and event space, DDA Director Angela Threadgill said during the meeting’s public comment period.

“Real estate available for office and event uses in the city is scarce and this property is in a highly desirable location, within a half-mile of the transit station, and contains a historic building that could be preserved and adapted for re-use,” Threadgill said, outlining reasons the board gave for its support.

Not everyone was so enthusiastic about the plans, however.

A representative of tenants living at 305 E. Ponce de Leon, an apartment building next to the school building, expressed concern that the use of the chapel as an event space would present more parking problems, noise and traffic than they had when the church still used the buildings.

“It keeps being mentioned that it is adjacent to commercial property, but this is an apartment building and people do live here,” building owner Alice Arogeti said. “We don’t have an issue with offices there, but we do have an issue with an event facility. I don’t think it is nearly enough parking for an event facility. We heard that it was going to be offices and I don’t think it has really been made known everything they want to do with it.”

When guests have attended weddings or church-sponsored events at the chapel, they have generally been encouraged to park at the larger church parking lot across the street at the church’s main campus, she said. “With the church no longer affiliated with it, where will people park? Parking is a problem all over Decatur.”

Planning Commission Chair Harold Buckley said that, though the application itself did not seem problematic, the owners should coordinate a meeting with residents of the apartments and any other nearby property owners to communicate their plans and get feedback.

“It sounds like you have a lot of concerned neighbors next door that might benefit from sitting down and talking it over with you to understand what the plan is,” Buckley said.

Rutledge said he would coordinate an informational meeting before the application goes before the City Commission for final approval at its next meeting on Sept. 28.

Planning Commissioner Mike Travis said he also wanted to strongly urge the group to do some direct outreach with the other neighbors prior to the City Commission meeting.

“I understand the neighbors’ concerns with parking,” he said. “If we were seeing a significantly different use for the property, I might be more inclined to support [a deferral]. Because the proposed use is fairly similar to what the structures were originally designed for – and the allowed occupancy for classrooms versus office space is the same — I don’t see anything that is a giant red flag jumping out at me. But their concerns are valid and they should be addressed.”

The Planning Commission voted unanimously to recommend approval for the rezoning and land-use applications as well as the special exception for the parking lot, with the condition that the new owners would maintain evergreen trees and shrubs around the perimeter that would block the view of parked cars from the adjacent properties and the street.