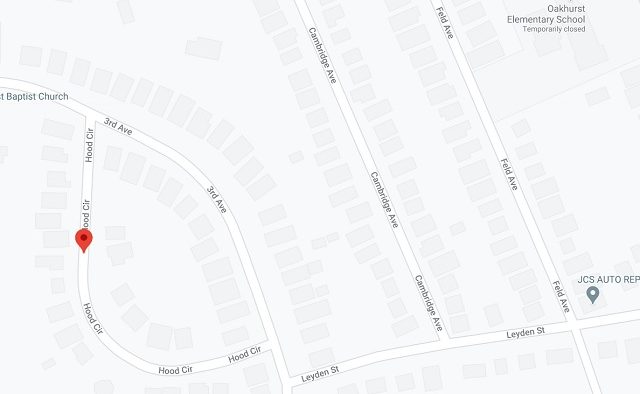 Decatur Police are investigating reports of shots fired in to two homes in Oakhurst: One on Hood Circle and one on Feld Avenue. Image obtained via Google maps.
Share

Decatur, GA — Decatur Police say that for the second night in a row, unknown persons have fired shots into an Oakhurst home.

“On Wednesday, September 02, 2020 at approximately 12:48 am, Decatur Police responded to a home in the 100 block of Hood Circle in reference to a shooting,” Sgt. John Bender said. “The residents reported that unknown persons fired several gunshots into the front of their home. Officers recovered shell casings outside and observed bullet holes in the exterior of the front of the house. No injuries were reported. This incident is currently under investigation. Due to similarities with a shooting reported in the 200 block of Feld Avenue the night before, investigators are looking for a possible connection between the two incidents.”

“The residents reported that two unknown males appeared in front of their house and produced a firearm,” Bender said. “The males began to discharge the firearm striking the house several times. Officers located shell casings outside of the home where the males were standing and bullet holes inside of the residence. No injuries were reported. Officers canvassed the area for additional evidence and are currently investigating the case at this time.”