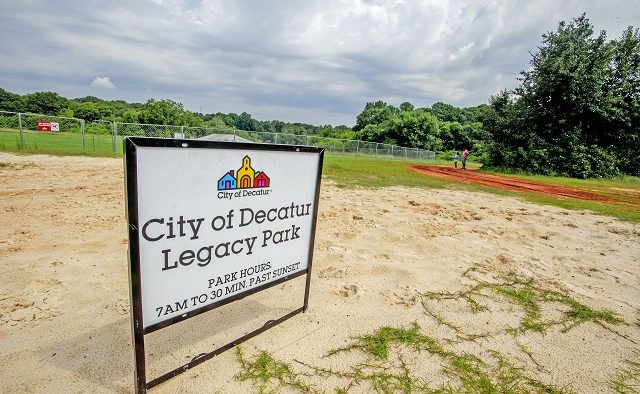 A view of Legacy Park on South Columbia Drive in the city of Decatur on August 17, 2020. The park occupies the former site of the United Methodist Children’s Home. Photo by Dean Hesse.
Share

We think Decatur residents should support affordable housing at Legacy Park, too.

But first, let’s dispense with the biggest criticism of this affordable housing plan for Legacy Park, namely that it was adopted in an underhanded and surreptitious manner.

That claim isn’t supported by any of the facts.

The master plan was publicly adopted in December 2018 and called for the inclusion of two separate affordable housing “villages” on the property. In March of 2019, the City Commission publicly awarded a $37,500 contract to Cooper Carry to provide additional planning services at Legacy Park. The contract was to “assist the city in further defining affordable housing options at Decatur Legacy Park located at 500 South Columbia Drive.”

There were meetings about this. One was with Housing Stakeholders on April 10, 2019. Then there was an affordable housing workshop meeting on April 13 that same year and then the discussion at the Winnona Park Neighborhood Association Meeting on May 21, 2019.

There were opportunities to learn and comment about the plan. Decaturish reporter Cathi Harris provided extensive and essential coverage of the housing amendment for our readers.

Affordable housing at Legacy Park was discussed at a public City Commission meeting in July 2019. At that meeting, it was noted that even if the city gifted the land to a developer, it would not be enough to make developing affordable housing on the property financially feasible unless some other incentive was involved. The city’s Planning Commission during a public meeting in December 2019 discussed and voted to approve the Legacy Park housing amendment, subsequent to the City Commission’s public approval of it. At the City Commission meeting, there was an opportunity for public comment.

Saying the city hid what it was doing with regard to the Legacy Park housing amendment is simply not true. And to those who have concerns about transparency regarding the happenings at Legacy Park going forward, rest assured that Decaturish is watching this project like a hawk. We will continue to keep the public apprised of what is happening with this important community asset and we will offer honest assessments of how our leaders are handling this responsibility.

Staying engaged and informed about our local government is a responsibility we all share.

If people opposed to this housing amendment didn’t pay attention and did not participate in these public discussion and approval processes, that is not the fault of the city of Decatur. Civic engagement is a two-way street. The city can’t force people to pay attention to the news or show up to important meetings. That responsibility lies with the citizens. You can’t expect the city to personally run everything by every individual citizen at their own convenience. There’s work you have to do as well.

Now, let’s grapple with the problem of affordable housing in Decatur. It requires context.

Decatur represents about 1 out of 250 people in metro Atlanta, so it should bear about that much of the burden. One might argue for more, because the MARTA stations make it much easier to accommodate growth. That’s 100 units a year, a very modest target. But most of the construction over the last two decades in Decatur has been to eliminate less expensive housing and replace it with more expensive housing.

At its core, requiring affordable units on new developments reduces the land use value.  If the economics on a new luxury development are “hard” when we include affordable units, then that is the market telling us that we have built enough apartments in Decatur.  We must be willing to accept that.

Previously, the city offered developers a density bonus, which in theory incentivized creating affordable housing by allowing more units than a project’s zoning would permit. In 2020, we reported that few developers were interested in this density bonus and city leaders considered this policy a failure. We appreciate the city’s candor but would be remiss if we didn’t note the city’s responsibility for Legacy Park being Decatur’s last chance for affordable housing.

Which is to say: the lowest 20 percent of renters in Decatur must still be earning about 90 percent of the area median income. It means a little less than half of the people who live in DeKalb couldn’t live in Decatur if they wanted to.

Most of those people are Black. It turns out that a lack of affordable housing is an excellent way to propagate segregation.

It is impossible to heed a call for fewer units of affordable housing in Decatur without ignoring how the city has largely driven out Black families over years of gentrification. It makes a hash of recent calls to uphold the needs of Black lives, which cannot matter to a community that makes effort to keep them out.

But there’s always a but. It always means the same thing.

“I support affordable housing, but …”

– but not near me

– but not at that location

– but not for those people

Every once in awhile, something happens that defines the values of a community, and we the citizens have the chance to tell our elected officials what we stand for.

This is one of those times. Developing affordable housing at Legacy Park is an expression of the type of place in which we want to live. It is a moral question, and the way the community responds illuminates the core values we hold.

The gaslighting by those trying to derail Decatur’s efforts to expand affordable housing has presented us with the opportunity to pick a side.

Are we a welcoming community, committed to the values of diversity, equity, and opportunity for all? Are we building bridges here in Decatur, or are we building walls?

We do not believe Decatur is a community of people who support segregation. Diversity isn’t meant to be easy, but we don’t fear it. We welcome and accommodate it. We value it.

We know many people in Decatur who wish there was a concrete action they could take to support Black lives. Painting murals is uplifting, but it is ultimately symbolic.

That is not the case with Decatur’s effort to create more affordable housing. We have in front of us a plan for affordable housing crafted by our community that will directly and concretely benefit Black people. It aligns with the values we have routinely expressed collectively. It is an unquestionable, indivisible good.

It is now under threat from a group of people deploying sophistry and misinformation in an effort to derail it.

If you want to concretely support Black lives, show up at the City Commission meeting on Sept. 21 and sign up to speak. Let the Commissioners know you support their efforts to expand affordable housing, no buts about it. If you cannot make the meeting, call, email, or write your Commissioner.  Don’t just post on Facebook – take the five minutes to directly communicate with your Commissioner.

Your voice is important, powerful, and your commissioner definitely wants to hear from you.

Editor’s note: The Decatur City Commission’s Sept. 21 meeting will be conducted via Zoom. The meeting begins at 7:30 p.m. Here is more information on how to participate:

– View the live broadcast of the Decatur City Commission meeting at     https://www.decaturga.com/citycommission/page/streaming-video.

– Register in advance to participate during either the “Public Comment” or “Requests and Petitions” portions of the meeting at https://zoom.us/j/93488278666. After registering, you will receive a confirmation email containing information about joining the meeting. You may also participate by phone by calling (929) 205-6099 and entering the meeting ID (The 11-digit number shown in the Zoom registration link.)

– If you are unable to participate in the virtual meeting, you may email your “public comments” on agenda items or submit “requests and petitions” by 5:00 p.m. on Monday, September 21st to: Andrea Arnold, City Manager, [email protected].

– The meeting session will be open to the public until the City Commission votes to enter into Executive Session.