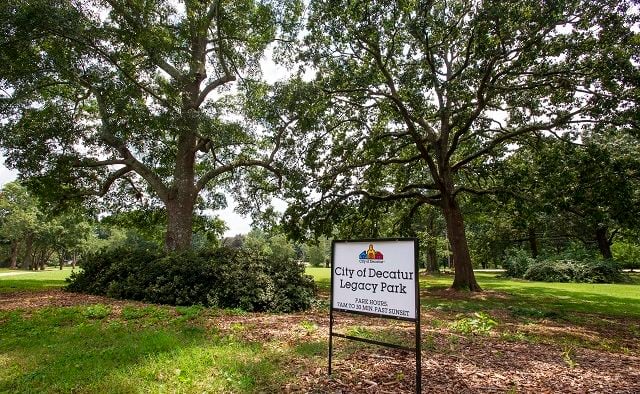 Legacy Park on South Columbia Drive in the city of Decatur on August 12, 2020. The park occupies the former site of the United Methodist Children’s Home. Photo by Dean Hesse.
Share

Decatur, GA — The Legacy Decatur board, also known as the Decatur Legacy Project board, held its first public meeting on Sept. 24.

The board will be responsible for managing Legacy Park, the 77-acre former United Methodist Children’s Home property along South Columbia Drive that the city bought in 2017.

Board members unanimously approved a short-term to-do list and a short-term budget to close out 2020. There was no discussion about developing any housing, affordable or otherwise, on the park property. That proposal has come under fire of late from a local activist group, Legacy Park Voice. The group insists it isn’t against affordable housing but argues the current plan, which proposes up to 175 units, wasn’t what neighbors thought they were getting when the city bought the property. They’ve also argued that they weren’t given opportunities to weigh in on the plan, despite the community input sessions and public meetings about the idea. Members of LPV argue the property should be mostly used as a public park.

Members of LPV attended the Legacy Decatur board meeting on Sept. 24, but there were no opportunities for public comment. The possibility of affordable housing is something that has the support of many others in the community, including the Coalition for a Diverse Decatur. In full disclosure, Decaturish also published an editorial voicing support for affordable housing at Legacy Park.

The Sept. 24 board meeting began with the announcement that longtime Decatur Assistant City Manager Lyn Menne, who retired last year, didn’t stay retired for long. At the beginning of the meeting City Manager Andrea Arnold, who serves as the Legacy Decatur board secretary, explained that the city had hired Menne a month later to oversee operations at Legacy Park. Her involvement in the project post-retirement was not widely known. Her contract was not approved in a public meeting because professional services agreements do not require City Commission approval, Arnold said.

“The agreement includes payment for professional services at $65/hour, the funds are included in the city’s adopted budget and professional services agreements do not require City Commission approval,” Arnold said. “Lyn is continuing to perform the duties with Legacy Park that she was handling prior to leaving the city. As you can see from the meeting, there is a lot involved in managing Legacy Park.”

The nonprofit Legacy Decatur board plans to hire an executive director in early 2021.

“Once the Executive Director recruitment and selection process is complete, her professional services will be completed,” Arnold said. 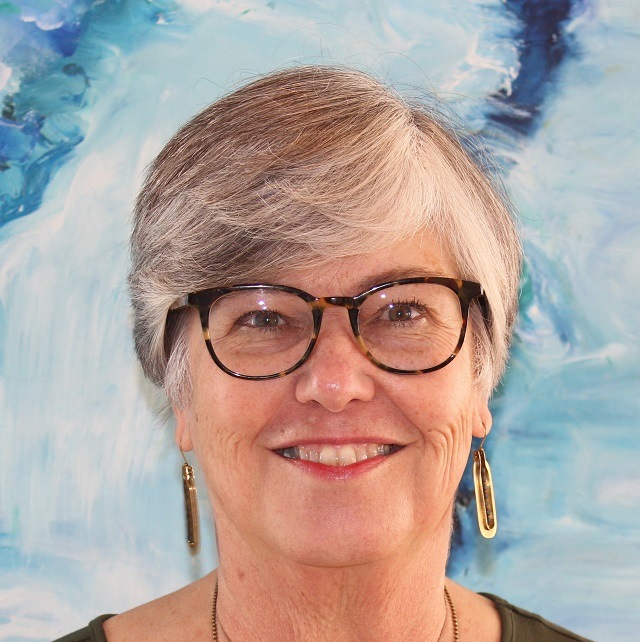 Menne was the original incorporator of the Decatur Legacy Project back in 2014 while she still worked for the city.

“Our original idea behind it was to have a vehicle for a committee of citizens to plan the 200th birthday celebration for the city of Decatur in 2023,” Menne previously said.

The Legacy Project also managed funds for other organizations in the city that didn’t want to create their own nonprofits, like the Season of Giving Project, the Friends of the Decatur Cemetery, and a fundraising effort by the Friends of the Oakhurst Dog Park.

The Legacy Decatur board opened its Sept. 24 meeting to the public after questions from Decaturish about whether the board, which consists largely of City Commission appointees and other current and former city officials, was bound by the Open Meetings Act, the state law that requires government bodies to hold public meetings. Decatur City Attorney Bryan Downs, who is not representing the Decatur Legacy Board, argued that those meetings were not required to be public because the board itself was not receiving funds from the city. Once the board starts receiving city funds – about $45,000 quarterly to cover its expenses – those meetings will legally be required to be public, Downs argued.

But open meetings experts have said it’s a gray area due to the novel structure of the board. The makeup of this particular board is not contemplated in the wording of the Open Meetings Act. If the board were sued over its previous actions and a judge found it should have held public meetings, any actions the board took could be voided. It is not known how many private meetings the board held since December when the City Commission approved a letter of intent that would put the nonprofit in charge of managing the park.

According to documents distributed at the Sept. 24 meeting, there have been at least two: one on Aug. 27 and one on July 30. Decaturish filed a records request for minutes of all meetings held since December 2019. It is not clear whether the board is also bound by the Open Records Act, the state law that requires the release of public records with some exceptions.

The City Commission in August approved an Operations Management Agreement with the Decatur Legacy board, which becomes effective Oct. 1. The budget and short-term work program begins on Oct. 1.

The short-term work program includes a lengthy task list. Here are a few of the items Legacy Decatur will be addressing this year:

– Scheduling an annual board retreat to develop a process for plan implementation, priority setting and leasing policies at Legacy Park and broader organization goals.

– Working with City Manager to schedule a joint work session with City Commission following board retreat.

– Working to identify possible small wedding event and or film production booking within the scope of COVID-19 policies. Menne said during the meeting that she is exploring the possibility of allowing a small wedding or two at the chapel on the property.

– Identifying small implementation projects that can be accomplished with community volunteers to engage with the community and encourage community connection and engagement with the property. Examples of this include celebrating and supporting community volunteer efforts to create and maintain the Decatur High School cross-country track/community trail. Another example is scheduling socially distanced gardening and landscape volunteer days to reclaim planter beds and remove invasives in the central campus area and create a pollinator garden.

Here is the short-term budget adopted by the Legacy Decatur board at its Sept. 24 meeting: 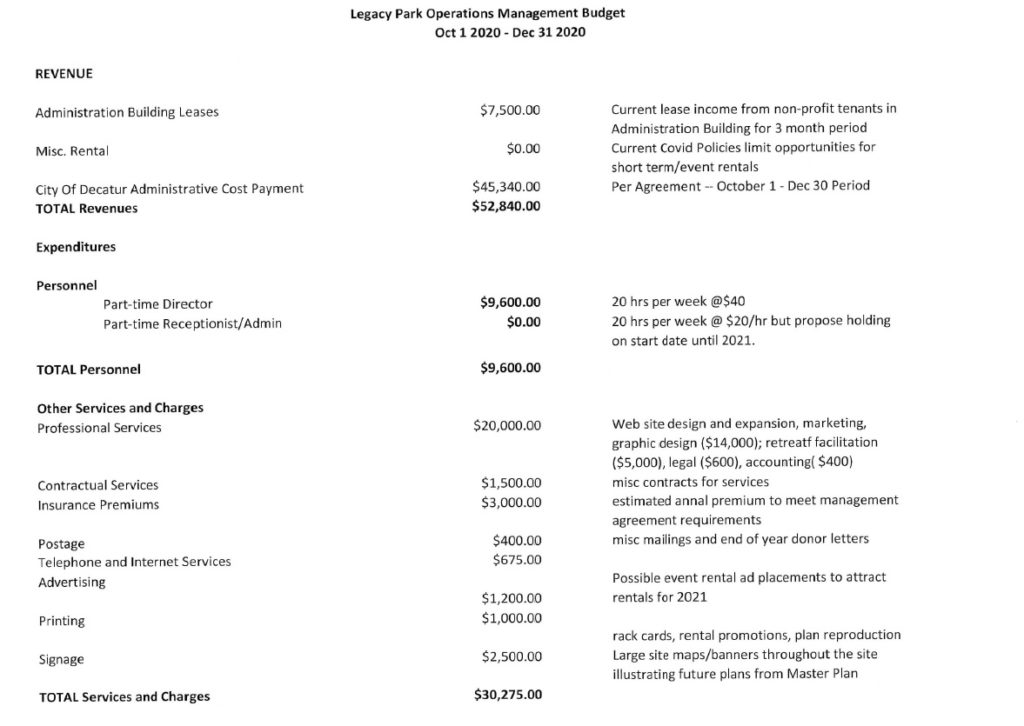 Decatur Mayor Pro Tem Tony Powers, who serves as the Legacy Decatur Board chair, said before the board approved the short-term work program that, “It’s clear this board has a lot in front of it.”