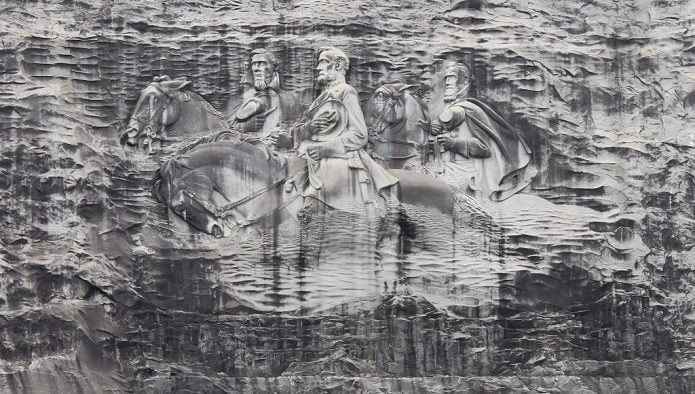 Eventually, the Stone Mountain Action Coalition wants at least the consideration of modifying or removing the giant Confederate carving that looms over the park. (Emil Moffatt/WABE)
Share

Stone Mountain, GA — As she began her presentation before the Stone Mountain Memorial Association’s board of directors Monday morning, Meymoona Freeman unfurled an American flag on the table in front of her.

Freeman is co-chair of the Stone Mountain Action Coalition, a new organization that hopes to bring changes to Stone Mountain State Park – among them replacing the display of Confederate flags with American flags.

Confederate symbols at the park – including the massive carving of Robert E. Lee, Stonewall Jackson and Jefferson Davis that looms over the park – are under renewed scrutiny among racial justice protests this summer.

Miguel Santiago shared stories the group has collected from Georgians who experienced racial discrimination at or near the park.

The coalition wants the Stone Mountain Memorial Association, the organization that oversees the park, to start with small changes.

Among them: removing all Confederate flags on park property and having the association’s board release an anti-racism statement. The group also wants the histories of Native Americans and African-Americans to have a larger place at the park, along with more emphasis on the ecology, geology and wildlife at Stone Mountain.

Eventually, the action coalition wants at least the consideration of modifying or removing the giant Confederate carving. The coalition argues that the board actually has broad authority under state law to make changes, so long as it preserves a “suitable and appropriate” memorial to the Confederacy.

But after hearing the group’s presentation, board chairman Ray Smith III says they are limited in what they can do under a state law that protects monuments.

Smith said the earliest the board would take any sort of action would be at its next regularly scheduled meeting.

“We are going to meet with the governor this week. We have our own ideas about some changes and some we believe that they will like,” he Smith. “Our changes are more additions than removals if you will.”

Teresa Hardy leads DeKalb County’s NAACP chapter and is a member of the new action council. She spoke at the end of Monday’s meeting and expressed frustration at the slow pace of change at Stone Mountain.

“That why I wanted to make sure that we are here to work together, not to have this nonchalant… that this is not important,” said Hardy.

Democratic State Rep. Matthew Wilson says he hopes that if small changes are made at the park, it will lead to a “broader conversation” about Stone Mountain.

“Given the time that we’re in here in 2020, I hope we’ll see a more robust discussion about this particular issue in January and some legislative action,” said Wilson.