Sept. 8 Decatur City Commission meeting will be a showdown over affordable housing at Legacy Park

Sept. 8 Decatur City Commission meeting will be a showdown over affordable housing at Legacy Park 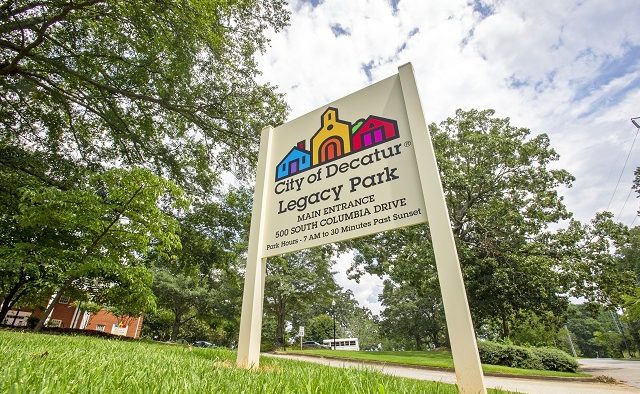 Decatur, GA — In December, the Decatur City Commission publicly and unanimously approved an addition to the Legacy Park master plan.

That addition — which further guides the development of affordable housing on the property and proposes up to 175 units with the goal of making as many of those units affordable as possible — has received renewed scrutiny in recent weeks.

A group calling itself Decatur Legacy Park Voice, led by Lynn Gathercole, has distributed a petition that now has more than 1,000 signatures. The petition asks the city to reopen the planning process for additional input. The group has argued that the planning process for this addition wasn’t well-publicized and that it removes eight acres of parkland that the taxpayers paid for. But affordable housing advocates, including the Coalition for a Diverse Decatur, are countering that the petitioners are spreading misinformation in an attempt to block the development of affordable housing on the property. Legacy Park Voice contends that “we are not against finding solutions for affordable housing.”

Both sides plan to speak to the City Commission at its regular meeting on Sept. 8. The meeting starts at 7:30 p.m. Due to the COVID-19 pandemic, the meeting will be held virtually.

Here are instructions for attending the meeting and signing up for public comment:

– View the live broadcast of the Decatur City Commission meeting at     https://www.decaturga.com/citycommission/page/streaming-video.

– Register in advance to participate during either the “Public Comment” or “Requests and Petitions” portions of the meeting at https://zoom.us/j/96189952923. After registering, you will receive a confirmation email containing information about joining the meeting. You may also participate by phone by calling (929) 205-6099 and entering the meeting ID (The 11-digit number shown in the Zoom registration link.)

– If you are unable to participate in the virtual meeting, you may email your “public comments” on agenda items or submit “requests and petitions” by 5:00 p.m. on Tuesday, September 8th to: Andrea Arnold, City Manager, [email protected]

During the 2019 elections, then-candidate George Dusenbury, who was subsequently elected to the commission, admitted he wasn’t happy with the Legacy Park plan overall. His comments were made before the City Commission approved the addition to the master plan. But Dusenbury said the property might be the city’s best hope of providing affordable units to the public.

“The site is the city’s last opportunity to address affordable housing on a significant scale, and this should be pursued in conjunction with the Decatur Housing Authority,” Dusenbury said at the time.

In that same election, then-candidate Lesa Mayer – who, like Dusenbury, was also elected to the commission – said that she believed there were opportunities for more affordable housing on the property.

While some who have signed the petition have accused the city of conducting a “bait and switch” and excluding the public when it amended the Legacy Park master plan, the public record shows that the changes were discussed publicly and voted on in public meetings.

The addition to the Legacy Park master plan was the coda to a larger master planning process for the property, formerly called the United Methodist Children’s Home, which the city purchased for $40 million in 2017.  The notion of using some of the 77-acre campus for affordable housing was communicated to consultant Cooper Carry, the company hired to develop the property’s master plan.

“In developing a master plan, it offers a unique opportunity for the City of Decatur to expand recreational facilities, protect additional greenspace, and consider community needs such as affordable housing, office space for compatible non-profit organizations and creative community uses such as studio and classroom space,” a memo attached to the Dec. 18, 2017 meeting agenda says.

The master plan was adopted in December 2018, and called for the inclusion of two separate affordable housing “villages” on the property.  In March of 2019, the City Commission publicly awarded a $37,500 contract to Cooper Carry to provide additional planning services at Legacy Park. The contract was to “assist the city in further defining affordable housing options at Decatur Legacy Park located at 500 South Columbia Drive.” There was a Legacy Park affordable housing workshop held on April 13, 2019.

Affordable housing at Legacy park was discussed again at a public meeting in July 2019. At that meeting, it was noted that even if the city gifted the land to a developer, it would not be enough to make developing affordable housing on the property financially feasible unless some other incentive was involved. The city’s Planning Commission during a public meeting in December 2019 discussed and voted to approve the Legacy Park plan amendment, subsequent to the commission’s public approval of it. At that meeting, there was an opportunity for public comment, and the housing addendum document also lists the outreach the consultant used to write the plan.

The consultant reported that, “The City e-mailed invitations to all individuals who have participated in the Decatur 101 program, as well as community partners listed in the Better Together Advisory Board community asset list. These e-mail lists combined have over 700 contacts that were notified of opportunities to participate. Special recognition is given to the Winnona Park Neighborhood Association (WPNA) for preparing and delivering additional public outreach materials to neighbors. WPNA hosted a neighborhood meeting in which the Legacy Park Housing Study was an agenda item.”

According to the consultant, there was a Housing Stakeholders meeting on April 10, 2019, the aforementioned affordable housing workshop meeting on April 13 and a discussion at the Winnona Park Neighborhood Association meeting on May 21, 2019, in addition to the other public meetings where the housing addendum was discussed.

Decatur Mayor Garrett raised these points in a widely circulated email that went out over Labor Day weekend.

“The housing addendum then went through the public hearing process,” she said.

In response to Garrett’s email, Legacy Park Voice said the level of public engagement around the amendment was inadequate.

“We know of no community meetings showing the final plan to the Decatur public before it went to committee,” the group said.

Decaturish asked City Manager Arnold whether the Legacy Project’s meetings will be open to the public.

“After the Decatur Legacy Project, Inc. receives the administrative cost payment from the City, it will be subject to the Georgia open meetings act,” she said. “In accordance with O.C.G.A. 50-14-1 (d)(1), a notice of the time, place and dates of regular meetings will be posted at the regular meeting place and posted on Legacy Decatur’s website.”

So when will the Legacy Project Inc. receive this administrative cost payment from the city?

“The agreement between the two parties is effective October 1,” Arnold said. “Any time after that, Legacy Decatur may request a portion of the administrative cost payment.  I do not know when that request will occur.”

Decaturish also asked whether the Legacy Project intends to hold private meetings before it receives this administrative cost payment and why it wouldn’t be treated like other boards handling city business, like the city’s Planning Commission. Arnold didn’t answer the second question directly.

She said she would ask the city attorney to clarify when Legacy Project board meetings will be open to the public.

Correction: An earlier version of this story contained the incorrect login info to comment at tonight’s meeting. This story has been updated with the correct information.