Shootings in Oakhurst leave shattered glass and confusion about motive

Shootings in Oakhurst leave shattered glass and confusion about motive 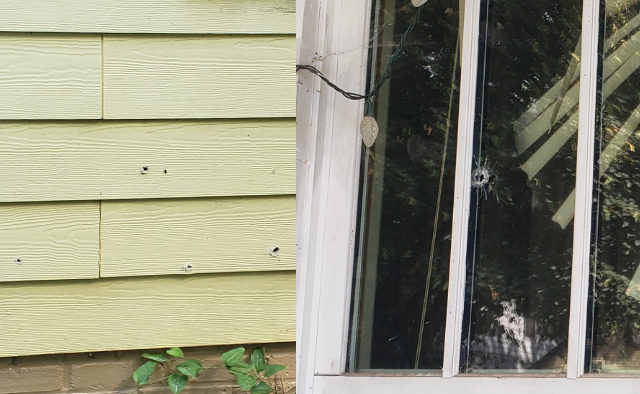 Unknown suspects shot up two homes in Oakhurst on consecutive nights: Sept. 1 and Sept. 2. The homes were pockmarked with bullet holes when a reporter visited them on Wednesday. Photos by Dan Whisenhunt
Share

Decatur, GA — It happened after midnight on Sept. 1. Then, at nearly the exact same time on Sept. 2, it happened again.

Two homes were shot up by unknown suspects shortly after 12 a.m. on both nights. The first home is located in the 200 block of Feld Avenue. The second home is 100 block of Hood Circle. There were no injuries, but both homes are visibly pockmarked with bullet holes. The home on Feld Avenue still had broken glass visible on the porch. Police haven’t released any information about possible suspects or a possible motive.

Decaturish interviewed residents of both homes on Sept. 2. The people who live there are elderly Black residents of Decatur’s Oakhurst community. The homeowner on Hood Circle has lived in Oakhurst for 50 years. The resident on Feld Avenue, who declined to give her name, has lived there for 43 years.

Both residents requested that Decaturish not publish their names or addresses out of concern for their safety. Both said they mostly keep to themselves and don’t have any enemies they are aware of.

The man who owns the house at Hood Circle said he spent last night in a Holiday Inn after the shooting. He lives in the home with his children, who are both grown, and was in his room when it happened. He said he didn’t know what was going on, at first. He quickly realized and began hiding.

He was confused as to why anyone would want to harm him.

The woman who lives on Feld Avenue was in her room when she heard the shots.

She didn’t see the suspects and neither did the man who lives on Hood Circle. Police did not immediately respond to follow-up questions about these incidents, but they said they were investigating to see whether they were connected. There is no evidence that the victims were targeted because of their race.

The victims are among Oakhurst’s most vulnerable residents. The racial makeup of Oakhurst has changed dramatically since the 1990s. Oakhurst is a neighborhood that has rapidly gentrified over the years. Companies looking to buy older homes and flip them for a profit have been pushy with residents, pestering them with letters, flyers and phone calls.