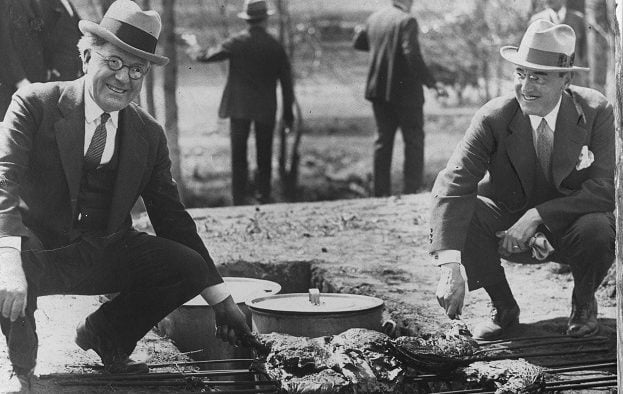 Editor’s note: This is the first of a three-part series on the history of Avondale Estates. Kathryn Wilson is an Associate Professor of History at Georgia State University, where her research and teaching focus on public history, race, and the urban landscape. She has lived in Avondale Estates for 11 years and is married to Lionel Laratte, the city’s first Black commissioner.

Avondale Estates, GA — Local history has it that self-professed “capitalist and human benefactor” George F. Willis discovered the land that would become Avondale Estates in 1923, traveling along Covington Highway from the tony neighborhood of Druid Hills to Stone Mountain, where he attended meetings as a member of the Stone Mountain Confederate Memorial Association.

The next year he purchased 950 acres in the community of Ingleside, GA, just east of Decatur, with the aim of creating a model planned community, “an ideally perfect social and political life.” Combining the “best of city and country” Avondale Estates married its pastoral setting with progressive urban planning to create an idyllic Anglo-inspired enclave with racism and white supremacy at the foundation.

Willis was a master huckster who turned to real estate later in his career after amassing a fortune hawking dubious patent medicines through his company International Proprietaries, Inc. specifically a concoction called Tanlac, a “splendid effective stomachic tonic” of wine, herbal bitters, a laxative, and glycerin, amounting to 17% alcohol.

As a Stone Mountain Association member and officer, Willis was in the company of many prominent Atlantans of the time (bankers, lawyers, educators, newspaper editors, executives, and politicians, including Atlanta Mayor J.N. Ragsdale) as well as governors of Southern states and prominent Klan members such as Nathan Bedford Forrest II (grandson of the Klan founder) and Samuel Venable.

An image from an old promotional brochure for Avondale Estates. Image provided to Decaturish.

The Association was formed in 1916 for “the purpose of perpetuating the memory of American valor” through a memorial to the soldiers and sailors of the Southern Confederacy that would “serve as an inspiration not alone to the south, but to the reunited country.” The timing is important; the formation of the Association is coincident with the resurgence of the Ku Klux Klan in 1915, which met at Stone Mountain, and the release of “Birth of a Nation,” (funds were raised for the memorial through screenings of the film in Atlanta). It is also during what US historians call the “nadir of race relations,” bookended by race riots: Atlanta in 1906 and Tulsa in 1921.

Willis seems to have worked primarily as a fundraiser, becoming SMCMA President in 1929. He might have been drawn in by Edward Young Clarke of the Southern Publicity Association, the primary publicist responsible for crafting an image of the Klan as an organ of law and order and public morality.

Willis consistently marketed Avondale Estates as an “ideal land of homes” offering “wholesome growth and healthful development of children,” a picturesque  “Old English” environment “far removed from the grime and noise of the clattering city.” In advertising his new development, Willis added testimonials from buyers.

One, in an April 24, 1927 ad in The Atlanta Constitution, praised Avondale Estates for having the “Right Kind of Neighbors,” claiming, “The youngsters have a big playground with swings and slides, wading pools and sand-pits…Off the streets. Out of the dust and danger of the city. And they will play with companions whose families I know — I meet them at the Community House where we have bridge games and parties right along — whose training is the same as my kids get, whose standards are high.”

High standards demanded not just class exclusion but also rigid racial segregation. The land Willis acquired was quickly tied to covenants that prohibited sale of the land to “any person or persons of color, or [to] any corporation which has as its officers any persons of color.” Such covenants were common across the South during this time; Avondale’s survived long after they were legally enforceable.

Willis carved out a portion of Ingleside that excluded the “Black side of town” to the north, consigning most of these residents—about 2% of the population—to a backstage area bordering Scottdale. Avondale Estates was dependent on the labor of people of color who maintained their gardens, worked the stables, cleaned their houses, cared for their children, and served in or ran local stores. The 253 abelia bushes spanning 3 city blocks were planted to form a clear boundary between the residential area and the commercial area, further marking the color line.

Avondale Estates’ leadership subsequently maintained the city’s exclusive status, either through practice or policy. In 1941, for example, the Avondale Estates Board of Mayor and Commissioners passed a resolution that no real estate should be sold to “persons of nationalities who do not or cannot intermarry or congenially associate with a very large majority of those now resident in Avondale Estates.”

The reasoning? The “natural result” of admitting “nationalities of widely divergent views and standards that prevent their assimilation, and which makes congenial relationship impossible,” would be “civic degeneration,” language eerily reminiscent of scientific ideas about Anglo-Saxon superiority and degeneration of the white race articulated a generation before by eugenicists like Madison Grant.

Grant was a great influence on sculptor Gutzon Borglum, who George Willis invited to reside in Avondale Estates while he was working on the Stone Mountain memorial sculpture. Borglum, who later went on to create Mount Rushmore, was an avowed white supremacist and sporadic participant in the activities of the Ku Klux Klan. In a letter to Klan leader Dave C. “Steve” Stephenson in September 1923, Borglum reflected on the ”evils of alien races,” after reading Madison Grant’s Passing of the Great Race, surmising that the Klan was “in truth the great non-partisan amalgam that will reunite and rebuild the broken course of our original Nationalism,” a nationalism threatened by the “mongrel horde.”

Although the sculptor and the Association had a falling out in 1925, Borglum left his mark on the commemorative landscape of Avondale Estates in the form of a Georgia state historical marker for the “Gutzon Borglum House,” located at 10 S. Avondale Plaza. The marker, erected in 1983 with the support of a local group known as Avondale Community Concern, refers to Borglum as an “early resident of the city of Avondale Estate”  and “close friend” of George Willis.

The fact that the only state historical marker in Avondale Estates is a tribute to a white supremacist is maybe no accident. Today Black Lives Matter signs adorn the home’s front yard, markers of a new chapter in Avondale’s history. 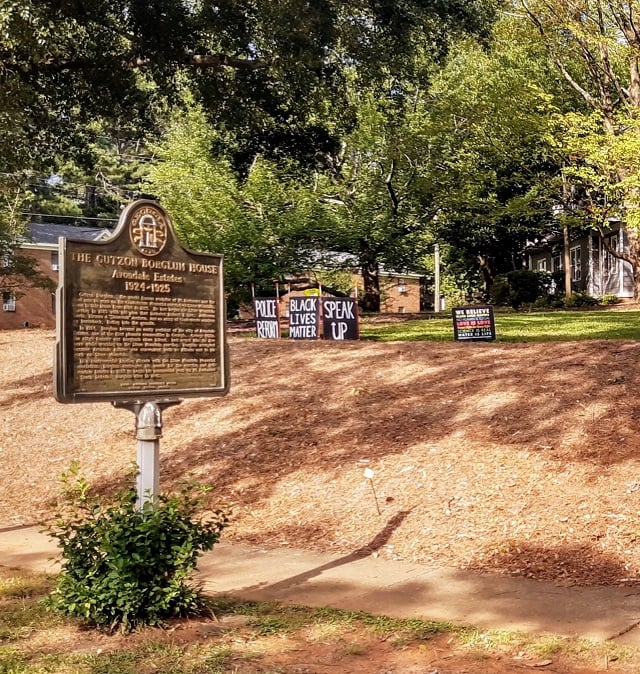