Virtual version of Decatur Book Festival kicks off this weekend

Virtual version of Decatur Book Festival kicks off this weekend 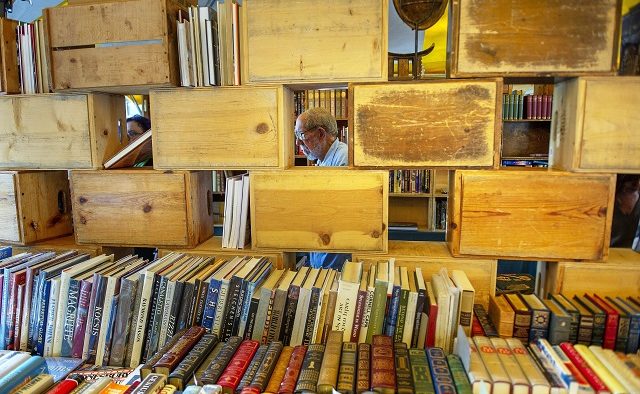 Decatur, GA — While the streets of Downtown Decatur aren’t lined with the Decatur Book Festival’s tents this weekend, the festival is still offering plenty of free, virtual programming for book-lovers during the month of September, including a partnership with local restaurants and distribution of free children’s books.

New additions to this year’s festival include free signed books, including children’s books, being delivered to Atlanta neighborhoods, and Decatur-area restaurants offering dishes that correlate with the festival’s featured books.

The 2020 Atlanta Journal-Constitution Decatur Book Festival presented by Emory University is partnering with the Dekalb Entertainment Commission and Georgia Humanities to distribute free books to Atlanta communities during several of the festival’s virtual events, according to a press release from the festival.

Beginning Friday, September 4, the festival is partnering with the Dekalb Entertainment Commission by having volunteers deliver free signed copies of I Am Every Good Thing to kids throughout Dekalb County who have signed up to watch the virtual Kidnote.

The Decatur Book Festival has also partnered with Georgia Humanities to distribute free signed books from its children’s/teen, culinary, and main programs to families served by the Andrew P. Stewart Center in Atlanta’s Pittsburgh neighborhood.

The Decatur Book Festival has received a generous gift of children’s and teen books from KPMG Family Literacy and First Book, both nonprofits that are committed to family literacy. These books will along with the others from the Dekalb Entertainment Commission and Georgia Humanities.

“It is so important to remember that promoting literacy, education, and community involvement are a big part of the Decatur Book Festival,” said Joy Pope, interim director for the Decatur Book Festival. “We are so thankful to the Dekalb Entertainment Commission, Georgia Humanities, and the nonprofit organizations KPMG Family Literacy and First Book, for their partnership in the festival.”

For those interested in the food and beverage scene, some of Atlanta and Decatur’s top restaurants will offer dishes from award-winning cookbook authors featured in the festival.

The festival’s culinary program, Culinary Conversations presented by Whole Foods Market, will feature nationally-renowned food historians, chefs, and food and beverage writers, according to a press release from the festival. This year, the virtual culinary program pays tribute to African American cookbook authors and food writers.

The following restaurants will offer a dish from each cookbook on the day of the virtual event. In addition, the featured cookbook will be given to the first five guests that order the special dish and mention the Decatur Book Festival.

September 16: The Deer and The Dove will offer two dishes, both from Virginia Willis’ cookbook, Secrets of the Southern Table: A Food Lover’s Tour of the Global South. The first dish is Smashed Fried Okra with Spicy Yogurt Dipping Sauce. They will also offer a dish featuring Benne Seed Crisps. Willis is one of The Grande Dames of Southern Cuisine, a panel also featuring Nathalie Dupree and Belinda Smith-Sullivan.

The Decatur Book Festival, one of the largest independent book festivals in the country, will be completely free and virtual this year, beginning on Friday, Sept. 4 and continuing through Sunday, Oct. 4.

All of the festival’s events are free and open to the public and will be available via Crowdcast, an app that is free to download. Sign up via the festival website: https://www.crowdcast.io/decaturbookfestival