Days before election, Dems and GOP take a swing at DeKalb elections department

Days before election, Dems and GOP take a swing at DeKalb elections department 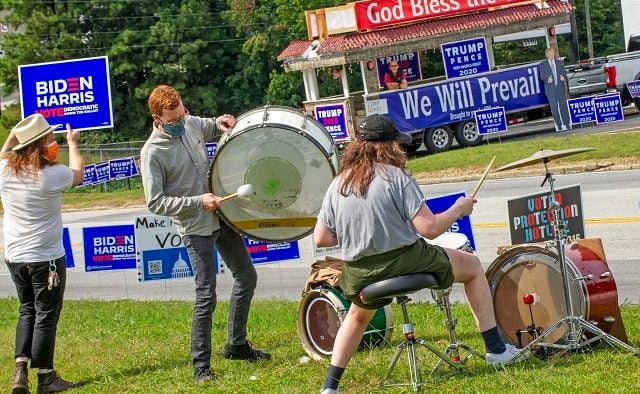 FILE PHOTO USED FOR ILLUSTRATION PURPOSES: Standard Electric Recorders Co. owner Damon Moon, on left, formed a drum line on E. Ponce de Leon Avenue after he said the volume of the music coming from the Trump event across the street left him unable to record in his studio. He was joined by passers-by who brought Biden-Harris and Black Lives Matter signs. Photo by Dean Hesse.
Share

DeKalb County, GA — In their last meeting before Election Day, the DeKalb Board of Registration and Elections met without its board chair, Sam Tillman. In recent weeks Tillman has left meetings early, and was absent at the board’s Oct. 28 meeting. His name still appears on the board’s website.

The Vote Review Panel is staffed equally by Republican and Democrat volunteers who review absentee ballots that cannot be read by scanners.

Flynn blames a lack of transparency and communication from the elections office for volunteers being unable to review votes. He said volunteers were sent home early, and removed from their responsibilities.

“We received no communication from the elections office about these changes or the reason for them,” the statement reads. “As of a week before Election Day, it is unknown to me whether or how many absentee ballots have been scanned, what if any process is in place for handling ballots that cannot be read by the scanners, who is processing any such ballots, or whether or when our volunteers will be permitted to review any such votes as required by law. As a result, I cannot say with any degree of confidence whether absentee ballot counting can be finished by Nov. 13, also as required by law.”

Flynn also called into question the non-partisan members of the Vote Review Panel. DeKalb elections board Vice Chair Baoky Vu said the reason non-partisan volunteers are on the panel is due to a law about state senate elections.

Hamilton said in her report at the Oct. 28 meeting, “As of last night the team let me know they had scanned 53,000 votes into the system.”

So far, 100,664 ballots have been accepted into the county’s software, ElectioNet. Vote Review panelists are allowed to create their own hours due to a change in procedure and software, Vu said, which may explain the GOP’s confusion.

The Oct. 28 meeting focused on procedural issues and informing voters how to proceed between now and Election Day.

Board member Dele Lowman Smith reminded voters to drop absentee ballots at a ballot box or early voting location – do not mail the ballot, she said, because the U.S. Postal Service will not guarantee timely arrival. Georgia Secretary of State Brad Raffensperger also delivered this message earlier in the week.

Board member Susan Motter stressed that voters who have been hospitalized and have not yet cast a ballot can do so from the hospital. Hamilton is planning to connect with local hospitals to provide guidance on how these voters can cast their ballots.

Due to COVID safety procedures, some polling places have changed or been consolidated. Voters are being notified of changes by mail, phone call, and text message. On Nov. 3, former polling places will be marked with signage and a QR code to allow voters to find the correct precinct. Large flags will mark active precincts.

Ballots and voter information will be available in Spanish and Korean on DeKalbVotes.com, but not at the polls.

Lowman Smith said new voter registration is up in majority non-white areas, there are fewer precincts now than in prior elections, and voters in the northern part of the county are more frequently voting by absentee ballot than in the southern part.

If the goal is to ensure the voting lines are not long like the June primary, she said, more poll pads are needed in South DeKalb to check-in voters. “That’s the choking point, as we’ve learned in early voting,” she said. “While there’s no one on this board or in the department who would intentionally disenfranchise any voter in the county, it can happen unintentionally by not responding to the data and the information that we have.”

“Voter confidence is at an all-time low in DeKalb County and across the state of Georgia,” Arnett said. “We are asking the DeKalb County Board of Elections to make a formal declaration on the record that every vote cast in DeKalb County will be counted.”

It would go a long way to increase confidence, she said.

The Elections Board did not make the formal declaration Arnett requested.