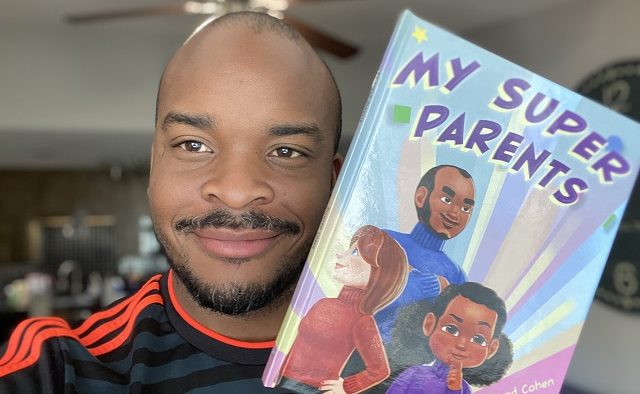 Decatur, GA —Richard Cohen was inspired by his three kids and their imagination to write the new children’s book “My Super Parents.”

Cohen, a Stone Mountain resident who works as a chiropractor in Decatur, said that the idea sprung out of his kids believing he has X-ray vision.

“Various things happened in everyday life where you maybe hear something that can only mean one thing so you call them out on it and they say, ‘How did you see that?!’ and I said I had x-ray vision and they believed that,” he told Decaturish.

This went on for three years before Cohen realized there must be other kids who think their parents have superpowers.

“I thought back to being a kid and parents having eyes in the back of their heads,” he said. “After listening to other parents and collecting various stories of super humanness, the thought took shape and I thought I should write a picture book.”

The result was “My Super Parents,” a story about a six-year-old girl named Zoe who tries to convince her classmates during her first-ever Career Day that her parents have superpowers.

“It’s very real and it ultimately boils down to a real love that is enduring and it manifests as superhuman capabilities for the parents, and a child who always feels safe and protected,” Cohen said.

Cohen always considered himself a man of science, but his kids opened up his more creative side.

“I jokingly say that they peeled the caution tape off the right side of my brain,” he said.

It took two years from the idea for the book to getting it published. Cohen hoped to be doing events to publicize the book.

“It turns out global pandemics are really good about disrupting market strategies in terms of reading to people and doing the Decatur Book Festival,” he said.

So he’s pivoting to figure out a digital marketing strategy that doesn’t lose the community feel he’s seeking.

And he wants everyone to feel part of that community no matter what they look like. Cohen is from Jamaica and his wife is from Germany, so their kids are biracial. That’s represented in the book with Zoe being biracial.

“It just pays homage to the beauty of parenthood and the beauty in inclusion and diversity, so I’m very proud of it for that reason,” he said.

“My Super Parents” was published through Lanier Press/Booklogix and is available on Amazon, Booklogix and more.