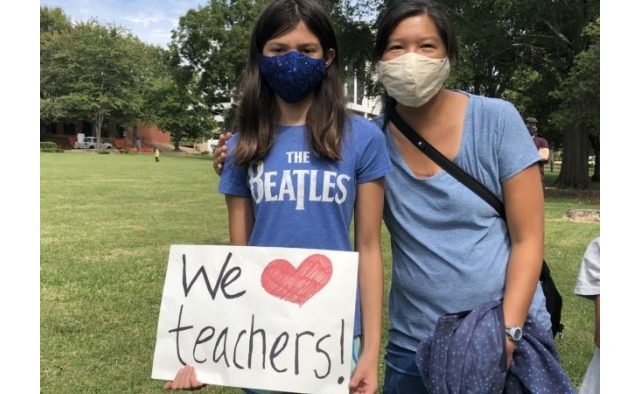 Keri Shaya and her daughter holding a sign reading, “We love teachers” during a Sept. 22 protest about City Schools of Decatur's reopening plan. Photo by Alex Brown
Share

Decatur, GA — During the Oct. 13 Decatur School Board meeting, district officials announced that students would not return to classrooms until Jan. 5 at the earliest.

Schools have been closed since March due to the COVID-19 pandemic.

That is a departure from a controversial plan that would’ve seen staff return to the building on Oct. 19, with students gradually returning after that.

The predictive curve from the data available on Sept. 18 indicated that by October 12, COVID-19 cases in DeKalb County would have dropped to about 35 per 100,000.

“Unfortunately, that’s not what happened,” said Superintendent Dr. Dude. Cases are currently at 105 per 100,000, higher than when schools were closed in March.

CSD, along with neighboring school districts Atlanta Public Schools and DeKalb County Schools, relies on Georgia Department of Public Health data and guidelines from the Centers for Disease Control that define more than 100 cases per 100,000 population in a two week period as “substantial spread” of the disease.

DeKalb County Schools is currently distributing “intent to return” forms to families, but has not set a date to return to school. The most recently stated plan from APS is to bring a small number of students including those with disabilities back into the classroom starting October 26. All districts have emphasized that reopening plans are contingent on public health data continuing to trend downward and staying in the less than 100 per 100,000 range.

Dude acknowledged that both the plan to re-open the schools and the decision to stay closed for now face vocal opposition.

“We are divided in a way that I’ve not seen with other challenges we’ve had to face,” Dude said.

Dude criticized the lack of guidance and coordinated response from state and national governments.

“The lack of leadership from the highest levels of our government institutions have caused chaos, and left local leaders scrambling to build an airplane while flying it, only to find out months later that we didn’t need an airplane, we needed a submarine, or maybe a space ship. We’re still not sure,” said Dude.

Dude and members of the CSD Board pointed out that while the CDC rubric offers information, it does not explain how to interpret it.

“I can’t find science that tells us at what level it’s actually safe to return,” said Board Chair Lewis Jones.

Board member Heather Tell said that Dude and his staff have had to reinvent themselves as amateur epidemiologists while simultaneously reinventing how school is taught and functions.

Dude criticized political meddling in institutions such as the CDC which undermined its credibility just as it was most urgently needed, and the funding choices that put businesses ahead of schools and public health.

“We absolutely could have gotten this virus under control over the summer, but we instead prioritized the short term gains of bars, beaches and bowling alleys, over the long term gains of opening schools and nothing else,” said Dude. “We invested $50 billion in bailing out the airline industry while investing next to nothing in bailing out our children.”

Dude acknowledged criticism that his decision-making process had not been transparent, but stated that part of the reason was that the experts he was consulting were reluctant to be identified publicly.

“They were worried that the hatred and vitriol that too often we see on social media would turn on them to the detriment of themselves, their families, or their livelihoods,” said Dude.

Dude said that he was grateful for how accessible medical researchers, epidemiologists, and professors had been for him, and had tried to balance their desire for anonymity with valid concerns about transparency.

Dude said that more of them were realizing that it was important for the community to know who was being consulted, and that the names and titles of those contributing would be included in public communication in the future, adding, “If you need to yell at somebody, please yell at me, not our experts.”

The very lengthy public comments were dominated by people who had come to express opposition to the plan to re-open CSD schools, who then thanked Dr. Dude for delaying the opening.

“Thank you for listening to teachers,” said Melissa Kacalanos.

Others were still critical of how the decision process had been handled and communicated.

“I think we’d be fooling ourselves to say there weren’t some hard feelings,” said Bo King.

Carmen Sulton, the current president of the CSD Black Parents Alliance, and members Danielle Suchdev and India Epps among others, passed on concerns from Black teachers and staff members about the particular vulnerability of Black students and staff.

Several commenters spoke about the perception among staff that they were putting their jobs at risk by speaking up.

“These teachers clearly fear that if they stand up for their safety they are at risk of being fired or retaliated against in another way,” said Damon Lockwood.

“I don’t know of any instances of someone being retaliated against and it would concern me if it did happen,” said Dude, adding that he planned to follow up with the Teacher Advisory Council.

Several epidemiologists and other medical professionals who are also parents of CSD students spoke, all of whom supported the decision to delay a return to in-person learning.

“While I do risk my life every day to see patients, I am in a room with a patient for max 5-10 minutes,” Sims said. “I am never trapped in a room with 15-25 people for six to seven hours at a time. That was a recipe for disaster. It should not be expected of anyone and is not in alignment with any public health recommendations.”

Dr. Kimmie Pringle, who has two children in the CSD system, is an emergency medicine physician and medical epidemiologist who works on coronaviruses including COVID-19 at the CDC.

“First I want to acknowledge the difficult position that the school district is in, in that they have not been given the proper support at the state or federal level,” said Pringle. She said that she had read CSD’s manual for re-opening the schools and that it was a good approach but not enough to open schools safely as of yet. Pringle suggested a multi-disciplinary approach to include public health professionals, educators, and building engineers.

Dr. Christopher Hsu has three children in the CSD system. He teaches pediatrics at the Emory School of Medicine, is trained in molecular virology, and is a medical epidemiologist at the CDC who has worked on COVID-19.

“I know this was a difficult decision, I commend you for it, and I encourage you to reach out to experts who are invested in this community,” said Hsu. He cautioned that the winter cold and flu season was likely to increase risk in ways that are not yet well understood, and echoed Dr. Pringle’s call for a multidisciplinary approach to re-opening plans.

Dr. Melissa Black, a parent of students at Fifth Avenue Upper Elementary and Renfroe Middle, is a family physician who teaches at Emory School of Medicine.

“As a physician working with a high-risk population, I would encourage us all to function as if there is always someone who is COVID positive in every room, including each classroom. This pandemic will not be over on January 5 and protections will still be needed,” Black said. She recommended “more than adequate” personal protective equipment for teachers and staff, and offered to help source it and raise funds for it.

“A teacher who sits in a classroom with unmasked children during the lunch hour is a front line worker,” said Black. “In March, I watched as administrators and hospital boards sent front line workers into a pandemic with inadequate PPE. I watched physicians and nurses lay down their lives. I will not watch the same thing happen in our schools.”

Dr. Michelle Sims said, “Thank you for the decision to delay opening up the schools. It restores my faith in this community.”

Board members voiced support for the decision and the superintendent.

Board member Tasha White spoke about the tensions in the community and among CSD administrators and staff.

Dr. Dude and others acknowledged that for some students virtual learning is not working, and that an education debt may be growing along with mental health concerns.

“This is not a risk versus no risk situation,” Dude said.

Parent Derrick Peavy stated that he would like to see a needs-based approach to deciding which students return to the classroom first.

Parent Clare Schexsnyder said, “It’s a lost year for all of us. Parents, kids, everyone.”