Decatur, GA — On Friday, Oct. 9, parents and teachers held a second protest against the City Schools of Decatur decision to reopen schools beginning with staff returning October 12 and continuing throughout November.

About forty people, including parents, teachers, students, and staff gathered in the field outside Ebster Gym Friday afternoon to continue putting the pressure on the school district’s reopening plans, which they say have not been altered significantly since the protest Sept 22 and subsequent meeting.

Many teachers who were interviewed preferred to remain anonymous to protect their identities as employees of City Schools of Decatur.

A teacher who preferred to remain anonymous called the reopening plan “a huge mistake” and felt that the district was “giving into pressure from Trump” and other politicians. “They’re putting everybody in danger, the whole community,” she said. “The annual contract never said anything about risking our lives or our careers.” 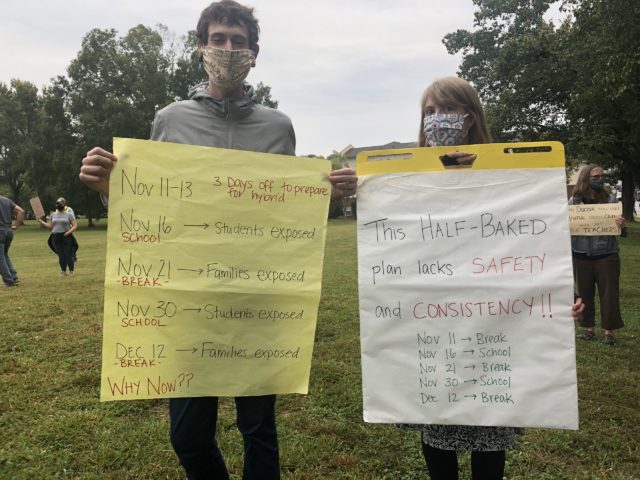 Nicole Blakemore, a teacher, and her husband Andy were at the protest. Andy said he was concerned about the lack of rationale for schools reopening, especially the upper grades. “The buildings are more crowded, and the school population is older — they seem to be managing with virtual learning pretty well.” He said the risk is greater due to the larger buildings and larger student populations.

“If the district had a more clear-cut plan, I might not be here,” he said.

Nicole Blakemore agreed that the plans were never clear. She said that in the teachers’ meeting with Superintendent Dude, most of his answers to questions were that the school COVID teams would have the answers. Blakemore urged people to send emails to the school board in advance of their meeting on Tuesday, Oct. 13. 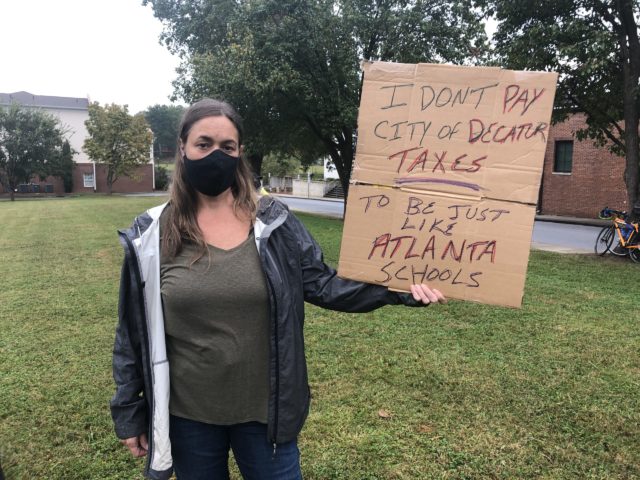 Temara Lucas, a parent, holding a sign reading, “I don’t pay City of Decatur taxes to be just like Atlanta schools.”

Temara Lucas, a parent, said that she was disappointed by the lack of creativity by the district. “This is a small school system that’s supposed to be able to adapt and adjust and be creative, but we’re being like all the other school districts,” said Lucas. “We have the opportunity to be creative and come up with something that would actually address the district’s needs, but it’s laziness.” 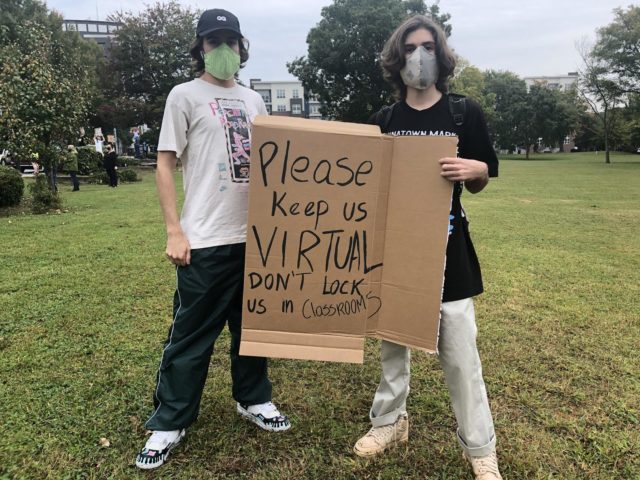 Decatur High School students Gabu and Diogo holding a sign that says, “Please keep us virtual, don’t lock us in a classroom.”

Decatur High School students Gabu and Diogo say the school district is ignoring the needs of people on their payroll. “They’re only looking at one possible solution, they’re not trying to accommodate for kids who have to learn online, people who have families at risk.”

The students said that the day after the district hosted a town hall for teachers, the teachers seemed uncomfortable and many did not have their cameras on.

Those in attendance said at least one teacher in the district has quit already over the reopening plans. Decaturish was unable to contact that teacher for confirmation.

“You can’t replace a teacher in the middle of the year during a regular year,” said an anonymous teacher from Renfroe Middle school. In a pandemic, she said, it’s basically impossible.

“I’m protesting for my friends and coworkers who do not have a voice, I don’t want them to quit. I don’t want to lose them as coworkers because they’re fantastic teachers, and they don’t really want to quit either,” she said.

“There’s people who do want to go back, but don’t want to be exposed to 100 kids,” she continued. On the survey, roughly fifty percent of sixth-graders said they were interested in returning in person. “Fifty percent of the sixth grade is still 250 kids, on two hallways with three restrooms,” the teacher said. 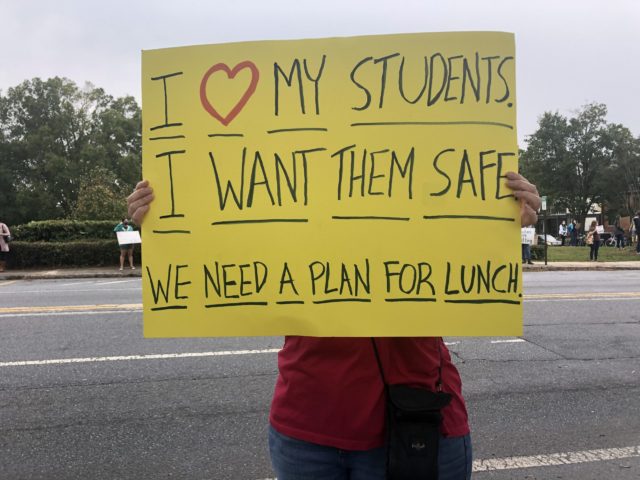 A protestor holding a sign saying, “I love my students. I want them safe. We need a plan for lunch.” She said the current plan was for students to eat lunch in the classrooms, which does not feel safe.

An anonymous staff member said that in addition to creating a plan that makes school safer for teachers, the plan would also need to not compromise the safety of custodians, paraprofessionals, traveling teachers, and support staff. She said these workers need additional PPE because they travel from classroom to classroom.

The support staff barely makes a living wage or weren’t making much money before the pandemic, she said. “They’re being put as frontline workers — sacrificial lambs.” 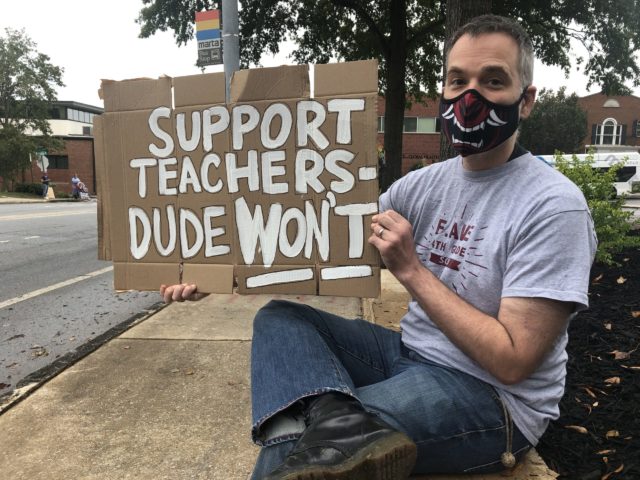 A fourth-grade special education teacher at Fifth Avenue Upper Elementary referred to the school district’s plan as “smoke and mirrors.” He said he felt that the task of figuring out guidelines fell to teachers, and teachers are not public health experts. “This is not safe, and any verbiage to the contrary coming from Dr. Dude is untrue.”

“There was a response given so there could be optics of a response,” he said. He referred to the response as patronizing and gaslighting.

He said teachers were told they would be given “expert instruction” on how to teach virtual and in-person simultaneously, but that has not been actually presented yet. 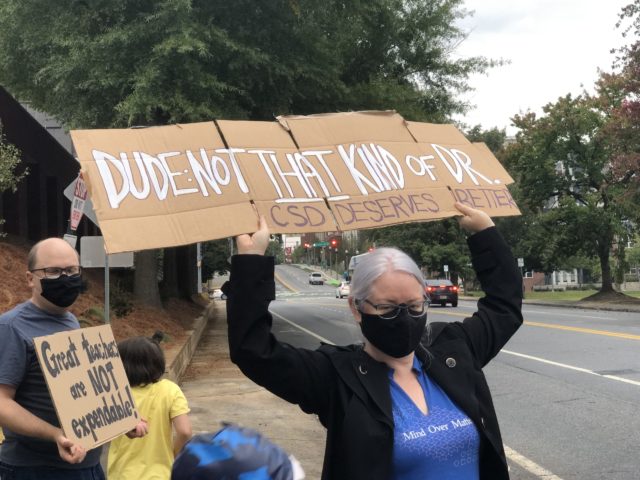 A protestor holding a sign reading, “Dude: Not that kind of doctor. CSD deserves better.”

Additionally, the superintendent has said that teachers would not receive extra planning time to figure out how to teach virtually and in-person simultaneously.