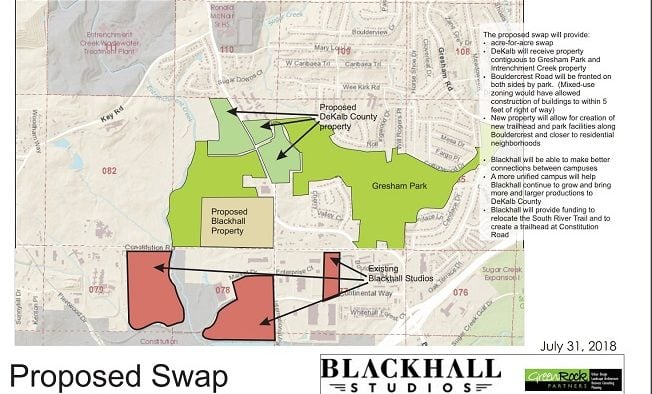 Commissioners Jeff Rader and Kathie Gannon tried to defer the agreement, but it passed with a 5-1 vote and one abstention.

Blackhall Studios is swapping 53 acres of its land on Constitution Road for 40 acres of Intrenchment Creek Park, which abuts Constitution Lakes. Before handing over the land,  Blackhall promised to put in $1.5 million in improvements including a new park, trails, and wetland restoration.

Use of the area has been in contention for years.

The agreement between DeKalb County and the movie studio states, “Blackhall has further agreed to assist with environmental enhancement such as removal of invasive plants and native plants replacement programs. Blackhall has also agreed to provide several community benefits, including internships/partnerships with the DeKalb County School Board, and entertainment industry programming for youths and adults at Gresham Park Recreation Center.”

Here is another map showing the location of the park and Blackhall Studios: 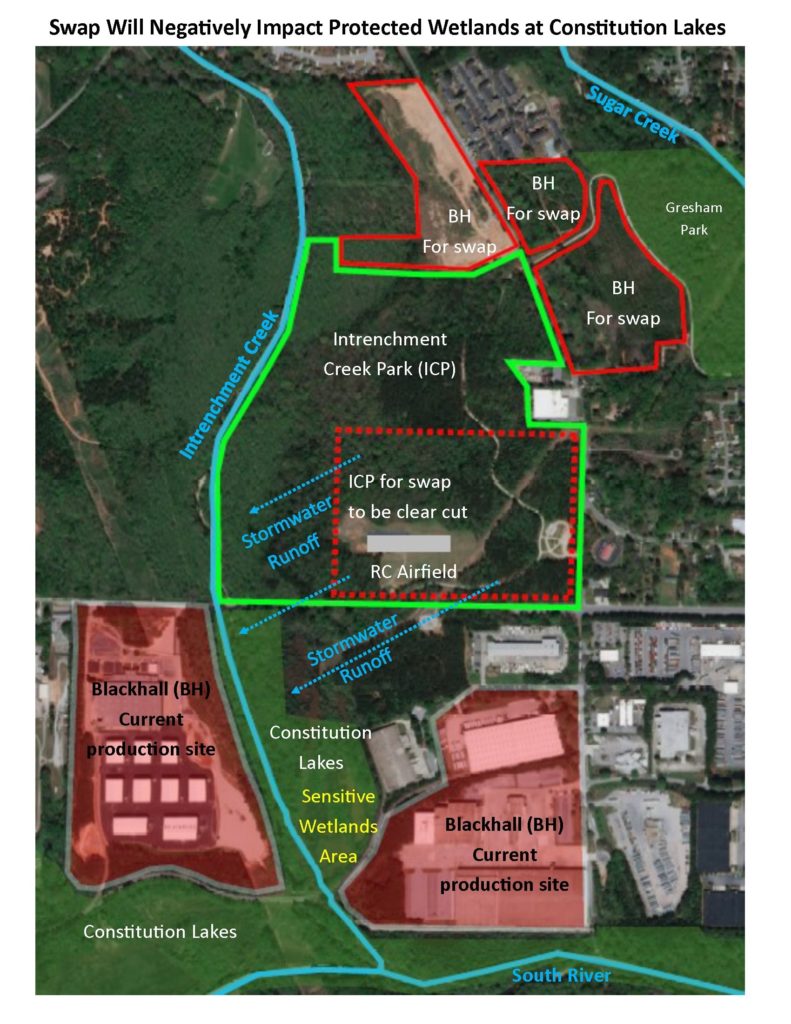 “This land exchange provides opportunities to provide equity and economic advancement for neighborhoods that have been historically underserved,” Johnson said. “Hundreds of acres will now be available.”

In the early 2000s the Arthur M. Blank Foundation paid for the purchase of Intrenchment Creek Park and nearby Constitution Lakes. Gannon, who voted against the agreement, said DeKalb County never developed the land because of a lack of funds.

“You think about the park, down the street in your community. If you think that park is protected green space, you just need to think again. If it’s in DeKalb County, it is not protected,” said Gannon.

Blackhall is owned by CEO Ryan Millsaps, a real estate executive, who has purchased multiple tracts of land in DeKalb County. Some of the land land is swampy, said Gannon, and unbuildable.

In January 2019, Blackhall proposed spending $3.8 million to improve the land as part of the swap. That changed during the 20-month negotiation with DeKalb County, and caused distrust from stakeholders.

Shannon Lee, senior urban conservation manager for The Conservation Fund, and nearby resident of Intrenchment Creek Park, said, “The land swap is not only a bad legal precedent that will put parks across Metro Atlanta at risk, but it’s also a terrible deal for the environment. And now at the very last minute, Blackhall is pulling a bait and switch and this deal is going from bad to worse. Blackhall promised $3.8 million for park investments and community benefits. Now they only want to give $1.5 million in ‘in-kind’ services, meaning Blackhall does the work however they like and then they claim success. Residents have no input on the design and taxpayers will inevitably be on the hook for anything not covered, or more likely, the project will be left incomplete.”

Lee said the deal raises questions about the county’s intentions.

“Either DeKalb politicians are inept and have been had by a savvy private developer, or they are in cahoots with Blackhall and are intentionally making a bad deal for taxpayers,” Lee said.