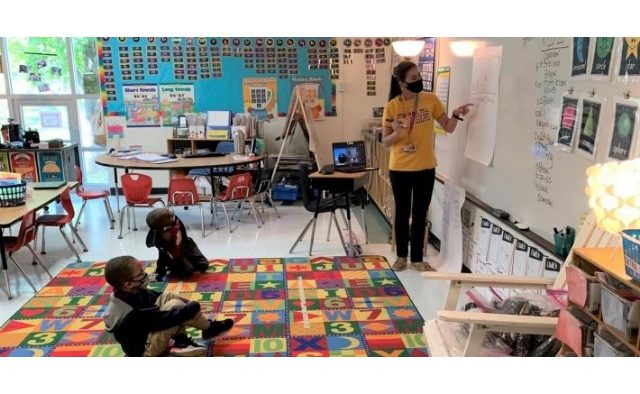 Fulton County, GA — As DeKalb County and city of Decatur schools have grappled with whether to allow students to return to in-person instruction, parents in favor of a return have pointed to Fulton County Schools.

If Fulton County Schools can re-open for in-person learning during the COVID-19 pandemic, the parents ask, why can’t we?

But recent developments within Fulton County show that reopening schools for in-person learning can be a disruptive experience, too. Students returned to full in-person instruction, five days a week, on Oct. 14, allowing families to choose whether to return or learn virtually. The reopening didn’t last a full week without two school closures.

The district closed Banneker High School in College Park two days after reopening after six cases were reported at the school, according to WSB-TV. Students there resumed virtual learning. On Monday, Fulton County Schools announced the closure of Cambridge High School in Milton after three or more cases were detected there, the Atlanta Journal Constitution reported.

A spokesperson for the district, Brian Noyes, told the AJC that the cases were expected with the reopening.

“We fully acknowledge there are going to be cases from time-to-time that will require us to act,” Noyes told the AJC.

Decaturish spoke with two Fulton County Board of Education members regarding the district’s decision to reopen for in-person learning.

When asked if the school district would reconsider its plans if cases continued increasing, Reeves said the school’s closing plans, called a “matrix” by the district, is not the same thing as its reopening plans.

According to Fulton County’s plan, the closures start at the school level first and that only occurs when three or more students or staff members are infected. If the spread is high enough, the district would consider zone-wide or district-wide closures.

So what’s different about Fulton County compared with DeKalb County or city of Decatur Schools?

Reeves said the school board deferred to its superintendent, Mike Looney, who didn’t waver from the reopening plan.

“The superintendent came up with the matrix and he made the call,” Reeves said.

She also said the district believes parents should have options.

“In Fulton we are a big believer in options. We’re a charter district,” she said. “We’re a large district. One would hope you provide options for people.”

She said schools have taken steps to mitigate the spread of COVID-19 in classrooms. The district has removed hand dryers, installed more sanitation stations, set up specific traffic patterns within hallways, taken away student lockers, reorganized drop offs and pickups, and in some schools put plexiglass dividers around desks.

Masks, she said, are non-negotiable.

“Everybody has to wear a mask. They’re serious about the mask,” Reeves said. “If you’re not wearing a mask, you’re going home.”

Reeves advised school boards to make their decisions without worrying about making everyone happy.

“The best advice I think I can give is if you can make the decisions outside the political arena,” she said. “Everybody’s going to disagree. We have a lot of people both sides who aren’t happy. … It’s difficult to make people happy in this particular environment. Every school district is doing the best to serve their districts in the best way they can in a situation that was thrust on them.”

Fulton County School Board President Julia Bernath said the district’s decisions are based on the data.

“Dr. Looney has always based his decisions on the data, from the CDC and Fulton Department of public health he and his staff had developed an opening matrix,” she said.

She said the district’s teachers have a variety of opinions, like the parents.

She said about 60 to 65 percent of Fulton County’s students decided to return to school, and the rest decided to remain virtual. She said offering virtual options for students might persist long after the pandemic is over.

Decaturish asked if Bernath how she felt about the possibility that a student or teacher could become severely ill or die due to COVID-19.

“It’s a difficult question to answer,” she said. “I hope none of us have to face that. I know that we can as a district we can help control the environment within our buildings or on our sports fields and we can hope that students and staff members are taking proper precautions when they are away from school. Once anybody leaves our buildings, we don’t know what they do. We have to hope they make good decisions to keep them safe, and hope they won’t transmit to other people.”

Lisa Morgan, president of the Georgia Association of Educators, said that teachers don’t trust the data published by school districts that choose to reopen.

“Nobody really knows as far as on a system-wide detail what is working and what’s not working, because educators do not trust the data that is being disseminated from the systems,” Morgan said.

She said she personally knows a teacher in Gwinnett County who was hospitalized due to COVID-19 but there have been no cases reported at the teacher’s school.

“That’s what I’m hearing all over the state, that reports don’t match what’s going on,” Morgan said.

She said she also personally knew of a teacher in Fulton County Schools who found out a student tested positive from that student’s parent, not the school district. Morgan said mistrust of the data is a “statewide issue.”

“An AJC article said only 70 percent of schools are reporting to [the state Department of Public Health], and it’s supposed to be mandatory,” she said. “When I hear it’s going well in a school system I believe it’s going well because absent the facts of the situation, an assumption is being made that lack of relevant data means there is no data.”

Morgan predicted that more teachers will leave Fulton County now that the district is forging ahead with its plan to resume learning five days a week.

Decaturish asked Morgan how long schools can remain closed for in-person learning before the situation becomes unsustainable. While virtual learning works for some families, it doesn’t for others.

“Are we talking about reopening schools, or are we talking about reopening school buildings? School has been open every day on the calendar since March 12,” Morgan said. “School buildings have not been open. I’m not saying that virtual instruction has been optimal. I’m not saying it works as well as face to face instruction. But with virtual instruction, we do not have students and staff becoming ill because they were in a school building. Educators can close the gaps if students have academic gaps when this is over. We cannot bring back staff or students or the families who become seriously ill or heaven forbid pass away. We have to be realistic about the severity. This is a life-threatening illness, but we do not have any clue about the long-term impacts on our children.”

But what about the long-term impacts of virtual learning on children?

“If your No. 1 concern is the health and safety of students, then yes we have to remain virtual,” Morgan said. “Because that is the only way we can know that we are not setting them up for an unknown future of complications.”

She said it won’t be possible to close academic gaps at all if a child dies due to COVID-19 exposure.

But isn’t there some kind of compromise or happy medium that teachers and parents could reach that would allow a return to in-person learning?

Morgan said that can’t happen unless school districts provide the resources to mitigate the spread of the virus.

“And in many cases, those resources are not being provided,” she said.

Morgan said there are still questions about whether school buildings have adequate ventilation systems. She said not every district has provided effective barriers in front office areas and there usually aren’t barriers between students in the classroom. Social distancing – providing six feet between each student – is nearly impossible.

“The most I have heard any educator say they’re able to separate their student is two to three feet,” Morgan said. “If we’re going to do the six feet, we’re going to have to have smaller classes. That means either more teachers and more space. How do we expand our buildings? Or we have the hybrid models where students are coming one to two days a week. That’s really where we are.”

Morgan acknowledged the situation is frustrating.

“The frustration is real for everyone involved and there are no good answers,” she said. “Teachers are extremely frustrated because they don’t believe there’s accurate data, and in the hybrid models, teachers are doing two jobs every day, teaching virtually and teaching those that are in person.”

She said many parents expect that when students return to the classroom they will get the same education they were receiving in March when schools closed, but that’s not the case.

But absent a vaccine, which could be months away, what can be done to offer complete assurances to teachers that it’s safe to enter a classroom?

“I think about the fact our college football players can be tested daily in some instances,” Morgan said. “If we had a rapid test where our students could be tested daily then we could say, ‘OK, everybody lines up, you get your test as you walk in and we’re pretty sure everybody is safe.’ But we don’t have that.”

Bernath, the Fulton County School Board President, acknowledged the fear that teachers feel.

“It’s difficult for teachers I know who want to be back in school but are worried about their own health,” Bernath said. “We’re standing in quicksand and we’re trying to find solid ground, and the ground is continuing to shift and will until we get a vaccine that’s proven to provide some protection.”

Want Decaturish delivered to your inbox every day? Sign up for our free newsletter by clicking here. t” /]