George on Georgia – Control of Senate might depend on DeKalb, and I have jitters

George on Georgia – Control of Senate might depend on DeKalb, and I have jitters 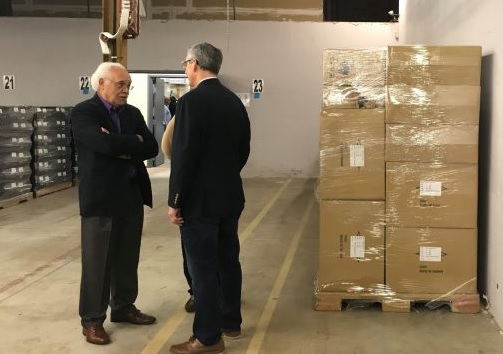 If everything goes to hell in DeKalb County on election night, Lane Flynn and John Jackson both want you to know you were warned.

The chairmen of both the DeKalb Republicans and the DeKalb Democrats have issued stern warnings about a lack of communication and apparent bungling at the Dekalb County elections office, with less than a week to go. DeKalb County might be the fulcrum upon which control of the United States Senate turns. It’s that important.

And Jackson, the pugnacious new leader of DeKalb County’s Democratic committee, wants the not-really-independent chairman of the election’s board and the director of voter registration and elections to resign. Now. Actually a couple of weeks ago.

Apparently, election operations here might end up in that kind of trouble, and Jackson wants to make sure there’s nothing ambiguous after the fact about where he thinks fault lies. Jackson isn’t seeing the transparency he wants, leaving him one pissed off Marine.

Meanwhile, Lane Flynn with the county GOP posted a note this morning that the office hasn’t started reviewing absentee ballots ahead of time, even though the secretary of state’s office cleared them to start on the 19th.

“As of a week before Election Day, it is unknown to me whether or how many absentee ballots have been scanned, what if any process is in place for handling ballots that cannot be read by the scanners, who is processing any such ballots, or whether or when our volunteers will be permitted to review any such votes as required by law,” Flynn wrote. “As a result, I cannot say with any degree of confidence whether absentee ballot counting can be finished by Nov. 13, also as required by law.”

(Editor’s note: Erica Hamilton, director of voter registration and elections for DeKalb County, said in her report at the Oct. 28 meeting, “As of last night the team let me know they had scanned 53,000 votes into the system.”)

Both Jackson and Flynn say that neither the board chairman Sam Tillman nor the elections department director Erica Hamilton are communicating effectively. Volunteer vote judges from both parties are left swinging in the wind, while the office appears to be looking for third-party help … without talking to anyone about it.

Tillman hasn’t returned my call or text. And he missed the Election Board’s meeting this morning.

Let’s be clear about what’s at stake. Georgia’s polls have been remarkably consistent about the two U.S. senate races: they’re very close. The difference between a runoff and an outright win is likely to be measured by a five-digit figure — maybe four digits — on millions of votes cast.

DeKalb County has about 560,000 registered voters and a minimum of 75 percent of them traditionally vote for Democrats. Given the uptick in registration and voter turnout this year it might be more like 85 percent. More than 240,000 people here have already voted.

A five percent difference in voter turnout in DeKalb is about a net 22,500 votes for Democratic candidates. And that, alone, might be more than the difference between a win and a runoff in the senate races. It may decide whether Trump or Biden wins Georgia.

Georgia is almost certainly going to top five million voters this year. I think it’s going to be closer to six million, based on voter registration figures, in an election which might hit a 100-year high of 75 percent turnout of eligible voters. Everyone who could register to vote this year, did.

About one out of 12 of those voters will cast their ballot in DeKalb. Historically, DeKalb outperforms the state’s turnout. If Georgia has 75 percent turnout, you would expect DeKalb to get to 80 percent turnout or more.

Assuming the county elections office can get the job done.

Now, the first day of early voting aside — when people lined up for eight hours at a pop to vote — things have been moving pretty smoothly. So far.

“The Board of Elections has been given everything it needs to run a smooth election,” Jackson told me.

They’ve got money. The board has heard suggestions and voted to make recommendations. The ACLU has come in to offer a deputy registrar program, for example.

But given the stakes, that first day should not have happened that way, Jackson said. And given how DeKalb managed to lose about 4,700 absentee ballots in 2018, Jackson would prefer not to take chances.

“The biggest hold up is Sam TIllman and Erica Hamilton’s willingness to share information with the other board members and the public and actually implement the changes,” Jackson said. “That’s an integrity issue. Sam’s arrogance has led to voter suppression in the past. His unwillingness to take suggestions and respect concerned citizens is why he really shouldn’t be there.”

There’s a bit more to it than that. Forgive me the inside political baseball that follows here.

Sam Tillman’s appointment to the board was a product of relationships built over decades when the political machinery of this county wasn’t quite as … animated.

Tillman had long served as a Democratic appointee to the board. When activists enraged by Trump’s abuses flooded the county Democratic committee, they threw out the old guard who had held leadership posts out of institutional inertia. The new committee sought to have the old elections board members replaced with new blood. For once, Tillman had to fight for his job. And at first, he lost. Tillman wasn’t renominated last year to serve on the board … as a Democrat.

Tillman availed of his relationships. Judge Asha Jackson ignored the party’s interest in replacing him, and appointed him as the fifth “nonpartisan” committee member. Tillman subsequently won election as chairman of the board in a 3-2 vote … his own, and the two long-serving Republican board members. He owes his chairmanship to clubby local politics and the Republican Party.

It is within Jackson’s power to suspend the board and the director and take direct control of this situation, now, while there’s time. I think she should do just that.