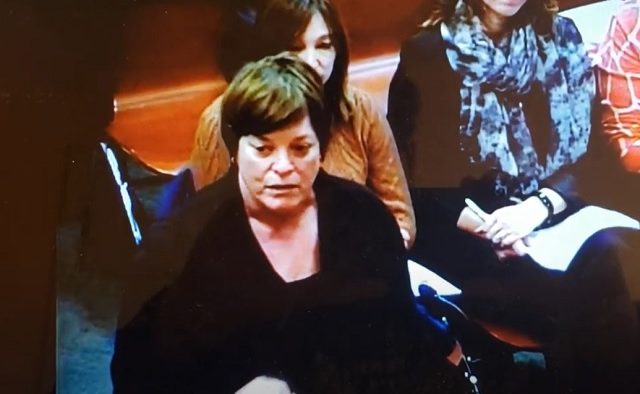 Decatur, GA — During the requests and petitions section of the Oct. 5 City Commission meeting, Legacy Park Voice organizer Lynn Gathercole accused Mayor Pro Tem Tony Powers of hiring someone to conduct a background check on her.

Gathercole has provided no evidence to support her statement, and it was an accusation Powers firmly refuted during the meeting.

The accusation is the latest development in a debate about the future of Legacy Park on South Columbia Drive. In December, the Decatur City Commission publicly and unanimously approved an addition to the Legacy Park master plan.

That addition — which further guides the development of affordable housing on the property and proposes up to 175 units with the goal of making as many of those units affordable as possible — has received renewed scrutiny from Legacy Park Voice. The addition to the Legacy Park master plan was the coda to a larger master planning process for the property, formerly called the United Methodist Children’s Home, which the city purchased for $40 million in 2017.

Gathercole has spoken about the housing addition at recent City Commission meetings during public comments. The Legacy Park Voice group has distributed a petition that now has more than 1,000 signatures.

The petition asks the city to reopen the planning process for additional input. The City Commission has so far declined to do so.

During public comments at the Oct. 5 City Commission meeting, Gathercole started talking about recent actions of the Legacy Park Voice group and her plan to conduct a survey about the park. She then directed her comments to Mayor Pro Tem Powers.

“Commissioner Powers, are you familiar with someone named Patti Cobb? It has come to my attention, and I hope very much that it’s not true, that you hired Patti Cobb to do a background investigation upon me in order to do a smear campaign on my integrity,” said Gathercole.

Decaturish was unable to find anyone in Decatur named Patti Cobb who provides background investigations. A person named Jodi Cobb managed Powers’ City Commission campaign, but Cobb said she has no idea what Gathercole is talking about.

Following the meeting, Gathercole confirmed she meant Jodi Cobb, but declined to provide evidence that Powers had hired her to conduct a background check.

She declined to identify the people who told her that Powers hired someone to run a background check on her.

“I think they had some knowledge of it,” Gathercole said. “Do they have a receipt or something? No.”

Gathercole later admitted that accusing Powers of hiring someone to smear her was a mistake.

“I was wrong in bringing it up in a public forum,” she said. “I should’ve gone directly to him. That might’ve been something that is not my best judgement.”

During the Oct. 5 meeting, Gathercole also stated she does not appreciate members of the Legacy Park voice being characterized as being “racist” or “against affordable housing.”

Mayor Pro Tem Tony Powers said that the accusations that he hired someone to investigate Gathercole were false.

“Ms. Gathercole, I am sorry that you feel that I have personally come after you and trying to smear your name,” he said. “But let me just be frank and clear. I’ve ran two campaigns against two people in this city against people who ran my name through the mud. … I have not hired anyone to besmirch your character.”

“We can agree to disagree, and we have done that on several occasions,” said Powers. “I think you might want to get your sources checked … Smearing you is not something that is on my list of priorities.”

“I personally would like to ask that as we continue those discussions we maintain civility and decorum and respect for one another … we can get so much more done,” Commissioner Lesa Mayer said.

“Affordable housing has been something we’ve pursued diligently, we have made great progress between 2018, 2019 and now,” Walsh said. “The folks on the commission, we’re not veteran politicians who run on a party platform, we’re just regular people.”

In other City Commission business:

– An alcoholic beverage license was approved for the BBQ Café on East Howard Avenue.

– A lease agreement for The Junior League of DeKalb County was approved, which includes a 5-year lease as opposed to 40-year lease, updated insurance terms, and city use of the facility at least six times during the year.

– An agreement was approved with AECOM to provide geotechnical services on Swanton Way and Jefferson Place in an amount not to exceed $25,000