New brewpub will take over Big Tex space in Decatur

New brewpub will take over Big Tex space in Decatur 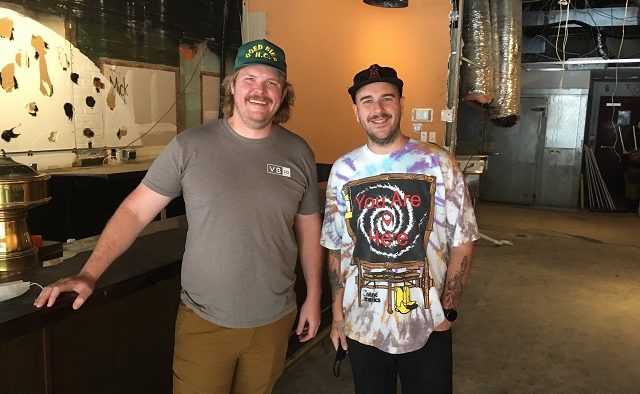 This story originally appeared as an exclusive for paying Decaturish supporters. To become a supporter and support local journalism for as little as $3 a month, click here. In addition to exclusive early access to some stories, you will also receive a copy of the Decaturish.com e-edition every month.

Decatur, GA — Owners Rhett Caseman and Josh Johnson got the name for Inner Voice Brewing from the lyrics of a Funkadelic song. They have been planning to open a craft brewery together since before Senate Bill 85 passed in 2017.  The bill, which allows direct sales to customers by breweries and distilleries, has ushered in a wave of new brewpubs in the Atlanta area generally.

Johnson said that the pair struggled with the right location until they started looking in Decatur and the former Big Tex location on West Ponce de Leon Avenue was the first place they found.

“We’re very, very happy to be here. I’ve always loved being in downtown Decatur, and this just seemed like a great place for another brewery. Obviously it has a pretty good beer culture already, with Twains and Three Taverns and Wild Heaven and the new ones opening up like Lost Druid,” said Johnson.

Johnson, who has a degree in hospitality management from Auburn University, met Caseman in 2013 working for Monday Night Brewing.  Johnson went on to work at Heist Brewery in Charlotte, NC, then returned to Monday Night Brewing as lead brewer, a position Caseman also held. As their plans to open their own craft brewery progressed, they both worked part-time at Variant Brewing Company in Roswell, one of the first small breweries to open up after SB 85 went into effect.

Caseman pointed out that the new law allowed for a relatively small business model without the need for the scale of investment and production that a large brewery requires, with the result that more brewers were opening their own craft breweries.

“That’s what our vision has always been, being a small brewery so you can produce a lot of different styles and not be stuck meeting the right number of beers for distribution,” said Johnson. Johnson said that while they would certainly brew plenty of IPAs and traditional stouts, they intend to take advantage of their ability to innovate, experiment, and accommodate differing tastes.

“We don’t want to pigeonhole ourselves,” said Caseman.

Rather than having their own food menu, Inner Voice will provide space for pop-up vendors who may be rotated periodically. “We’re looking for something that compliments beer,” said Johnson.

The former Big Tex space at 308 West Ponce de Leon Ave. is being remodeled to expand seating and in preparation for the arrival of brewing equipment at the end of this year. The opening is planned for the spring of 2021.

Johnson and Caseman are preparing for the likelihood of continued impact from the COVID-19 pandemic by adapting their original plans to allow for outdoor seating, more ventilation for indoor seating, and packaging for to-go sales. “Ultimately, people are still drinking beer, so as long as we can find a way to get it through the door, I think we’ll be ok,” said Caseman.