The Java Monkey in Decatur before it was destroyed by a fire two years ago. Photo by Dan Whisenhunt
Share

Decatur, GA — Two years after a fire destroyed a popular downtown Decatur coffee and wine bar, the property owner is moving forward with plans to rebuild with a new design.

“Our new building will be built, God willing, very soon,” Joseph Ahlzadeh, the owner of Guardian Property and Management, said during Tuesday’s meeting of the Decatur Planning Commission. “We have owned this property for 28 years now, and we are hoping to rebuild the area that Java Monkey had the cafe and restaurant with what we hope will be a similar use and will be a great addition to that area of downtown.”

The new building will make better use of its small footprint by featuring a front wall made of cantilever glass doors that can either be closed or opened and moved aside to open the dining area to the outdoors completely, Alzadeh said.  Where the old Java Monkey had a decorative metal divider separating its patio area, the new building will have a large planter that aligns with the outer west wall of Fresh to Order, with the entrance to the completely enclosed new space immediately behind it.

“We will not have any impact on the existing streetscape,” Ahlzadeh said. “We are building well within our own property line. We wanted to be sure there would be no reduction in the sidewalk area.” 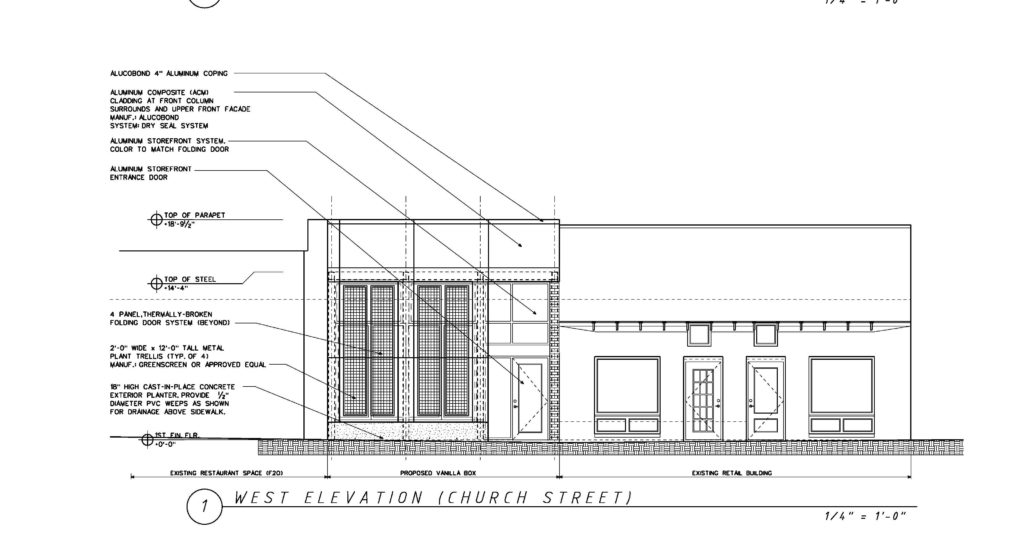 This drawing is the part of the application that shows what the new building might look like. Image obtained via the city of Decatur.

In order to rebuild, however, Ahlzadeh will need the city to grant the project two exceptions to the requirements in the Unified Development Ordinance.

The first, would eliminate the requirement for the business to have at least two off-street parking spaces. The second exception would allow them to rebuild on the same footprint as the old building without allowing more of a buffer next to the sidewalk.

Although Java Monkey never had off-street parking, the building had been grandfathered in as a nonconforming use when the current UDO requirements were written. Since the old building will be completely demolished and a new one constructed, it is considered new construction and the new standards apply, clarified Angela Threadgill, Decatur’s Director of Planning and Economic Development.

In a report accompanying Ahlzadeh’s application for the exceptions, city planning staff recommended that the exceptions be granted.

“Historically, off-street parking was not provided in urban environments. It wasn’t until the 1950s and ‘60s that off street parking even became a thing,” Threadgill said. “When we look at this parcel, which is about 0.05 acres, we don’t know where they could put off-street parking. And, we don’t want a curb cut there along Church. And it would harm our downtown pedestrian area to have to put parking on such a small site.”

Ahlzaheh noted that he had been a part of helping the city redesign that corner of Church Street to be more pedestrian-friendly several years ago.

“At that time, we gave up several curb cuts and access points to create that streetscape that you see now,” he said. “We would certainly not want to go backward and harm the feel of that area now.”

The newer streetscape requirements that he is asking for an exception to are also not feasible for such a small middle-of-the-block building in that area, Threadgill added.

“The streetscapes placed there go back to about 1996 or 1997 on Church Street,” Threadgill said. “Since that time our downtown street standards have changed a little bit. Whenever redevelopment occurs, we are looking [requiring] at wider sidewalks and wider furniture zones. So, the conditions on that sidewalk are a little less than our standards today. But when we are looking at such a small footprint, it would be very difficult to make [them have] a wider sidewalk or wider furniture zone when you can’t continue it through the rest of the block.”

For that reason, the staff supports the request for the exceptions.

The members of the Planning Commission agreed, voting unanimously to recommend approval of the two requested exceptions.

“I think this is a great opportunity to really activate this space in a way that will capture what we had with the old [Java Monkey] with some more amenities and shelter from the weather,” Greg Chilik, a member of the Planning Commission said.

The Planning Commission recommendation will be forwarded to the City Commission, which will make the final decision.