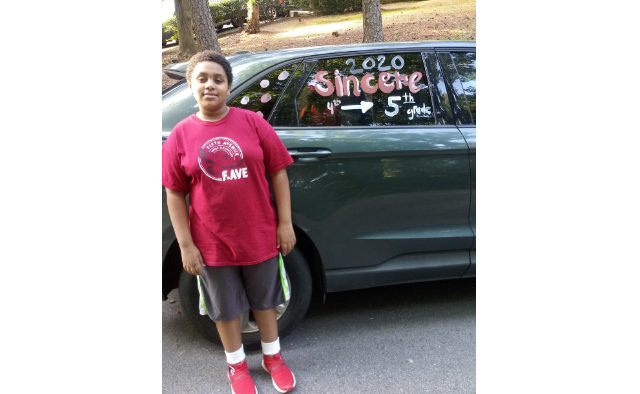 Sincere Kenney, 11, is a student at Fifth Avenue Upper Elementary in City Schools of Decatur. He is recovering from Multisystem Inflammatory Syndrome, a result of COVID-19 exposure. Photo provided to Decaturish
Share

Decatur, GA — Oneka Taylor thought her son was feeling ill because he had eaten to much junk food while he was at home learning virtually.

But it turned out to be a much more serious condition and one that Taylor said should be a warning to City Schools of Decatur as it plans to bring students back into the classroom while the COVID-19 pandemic is ongoing. CSD’s plan is to phase students in by grade level over several weeks in November, beginning Nov. 2. It’s a plan that has drawn fire from teachers and parents in the school district.

Sincere Kenney, 11, is a student at Fifth Avenue Upper Elementary in City Schools of Decatur. Like all CSD students, he has been learning virtually since the school year began. Taylor is teacher’s assistant at College Heights Early Childhood Learning Center.

“Sincere started complaining of a headache and a stomachache about three weeks ago so I just figured, you’re home, you’re virtual maybe you’re eating too much junk,” Taylor recalled.

When the symptoms persisted, Taylor chalked it up to sinuses. Her son has asthma. He said he had a headache, which subsided, but he was still complaining of stomach pains. Taylor agreed to make a doctor’s appointment.

On a Saturday morning, she walked past his room at 4 a.m. She felt his head and told her husband her child was “on fire.” His temperature was 104.

She called an ambulance, which declined to take him.

“They just said there was nothing they could do for him,” Taylor said. “They came all the way in my house, right upstairs. They never ever said why. They said maybe it was strep throat and that if I couldn’t break his fever that I would need tot ake him to the hospital.”

So, she drove her son to Scottish Rite Urgent Care. Due to his symptoms, he was transferred to Scottish Rite hospital. They gave Sincere a test for Multisystem Inflammatory Syndrome in Children (MIS-C). It’s a rare but severe side effect of COVID-19 exposure. His test came back positive.

According to the CDC, “Multisystem inflammatory syndrome in children (MIS-C) is a rare but severe condition that has been reported approximately 2–4 weeks after the onset of COVID-19 in children and adolescents.”

It can sometimes be fatal.

Some of Sincere’s symptoms included red splotches on his body and bloodshot eyes. Taylor said that due to his condition, doctors couldn’t give him anything to reduce his fever and could only give him antibiotics.

“It’s an inflammatory syndrome that attacks the stomach and intestines, the brain, the eyes, the lungs, and kidneys,” Taylor said.

She said her son’s whole body was sore. He couldn’t move.

“It just beat the shit out of him,” Taylor said. “He had to have a breathing tube. It makes your heart rate go up. He was on heart medication. His chest was going 1,000 miles an hour. I don’t think there’s anybody who wants to look at your kid like that.”

Taylor said she’s unsure how Sincere was exposed to COVID-19. She said since the pandemic began, she has had an opportunity to be in the building at College Heights, but her husband also works as a contractor. But doctors told her that adults can pass COVID-19 on to children.

When she heard about CSD’s recent plan to bring teachers and students back into the building, she worried about the possibility she could pass COVID-19 on to her students.

“So what? Are you lining me up to be a murderer? You’re forcing me to work in front of these children?”

CSD promised to return messages seeking comment for this story. Taylor said she’s received support from the teachers and other staff at her son’s school, but has heard nothing from CSD’s central office.

Sincere is home now. He was discharged on Sunday afternoon. His mom said he’s quiet, sensitive and shy. Yet everyone seems to know him and she’s never gotten any calls from the school about his behavior. Her son is also stout. He likes to draw and play basketball.

She worries about how COVID-19 will affect students who are younger, frail and have other conditions like asthma.

When students return, parents will have the option to keep their kids out of school. Taylor said she won’t send her son.