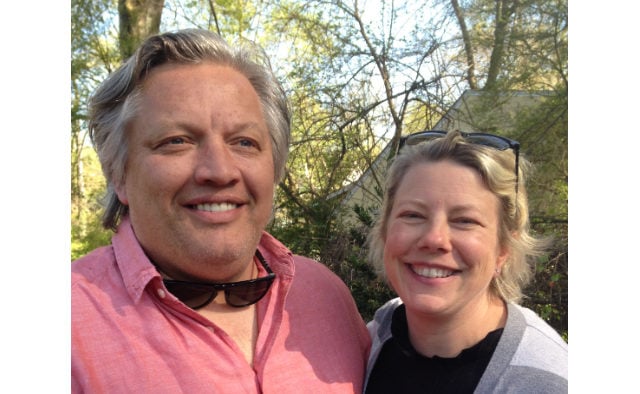 Michael Condon, who has been a chef for 35 years, purchased BaddaBing! Catering with his wife, Tanya Tveit, in 2004.
Share

Decatur, GA – BaddaBing! Catering was once known for its soups, sandwiches and grab-and-go meals. The Decatur business switched to only catering a couple years after getting new owners 16 years ago. Now, due to the COVID-19 pandemic, BaddaBing! is shifting once more to offer a meal delivery service.

Michael Condon, who has been a chef for 35 years, purchased BaddaBing! Catering with his wife, Tanya Tveit, in 2004. However, BaddaBing! burned down in 2005 along with other businesses when it was located on College Avenue.

The catering aspect of the business grew after that, especially as Condon and Tveit catered an event out of their townhome days after their building burned down.

“We had to subsidize our business and still keep it on the map because if it’s gone long enough, people start forgetting. That’s when we started asking for a lot more catering from Emory because it was the only facet we had to make money,” Condon said. “Trying to survive the summer of 2006 felt a lot like it does right now. We were just cooking out of our house and doing what we needed to do to make ends meet.”

Condon and Tveit gained a lot of business with events, like Emory’s medical school graduation, in 2019; however business slowed down earlier this year due to the COVID-19 pandemic. As caterers, they weren’t mandated to shutdown during Georgia’s stay-at-home order in March and April but they couldn’t cater events. People were prohibited from gathering in groups and events were canceled.

BaddaBing! went through three months without having any sales when COVID-19 hit Georgia. The pair then came up with the idea of delivering meals to the residents of Decatur and surrounding areas.

Tveit writes the menus for each week for people to order dinner online. The meals are cooked the same day, chilled and delivered to customers’ doorsteps Monday through Friday.

“I feel like I know what a lot of people enjoy eating. We collaborate and come up with something that would be somewhat healthy, somewhat comfort as well,” Tveit said. “If you communicate with us, if you have any dietary restrictions we will make and specialize the meal for you.”

Meals are packaged in bento boxes, everything is labeled and cooking instructions are included. Condon blanches the food, cooks it half way, to prepare it for delivery. The meals are also labeled as vegan, gluten-free and dairy-free when necessary.

“When we started, which was in July, we were doing six to eight meals the first week so it was pretty much a complete disaster,” Condon said. “We both knew that if we just stayed the course, it would get better and better and better.”

Tveit added that some people have ordered food for family members or friends when they want to send food for an occasion but don’t necessarily want to cook it themselves. Some customers have also bought gift certificates to give as gifts to provide food for others.

Many people used to only hear about BaddaBing! through events and only knew Condon and Tveit as good caterers, Condon said.

“Now, we have to put our money where our mouth is. We have to show up with the goods at your doorstep and you can be the judge whether we’re good or not,” Condon said.

“Also, I think when this whole thing blows over, which we don’t know when that’s going to happen, people are going to know us personally and intimately as far as our food is concerned. I love that aspect of it,” he added.

BaddaBing! is also offering a butcher block program where Condon orders meat from local distributors, butchers the meat and makes marinades and dry rubs. He puts the butcher block together and it can be delivered the next day.

One thing Condon and Tveit are adamant about is the value they share with customers.

“We know where we are as far as financial difficulty. We know what that feels like. I want to do this for people out there that are having the same issues and problems and with their kids at home. I want to be a service for sanity,” he added.

Meals are delivered Monday through Friday from noon to 5 p.m. currently within 10 miles of BaddaBing!, which is located at 186 Rio Circle, but are open to serving many areas. They have delivered to areas such as Avondale Estates, Tucker, Morningside, Candler Park, Druid Hills and Midtown Atlanta. To order a meal, visit Baddabingcatering.com.