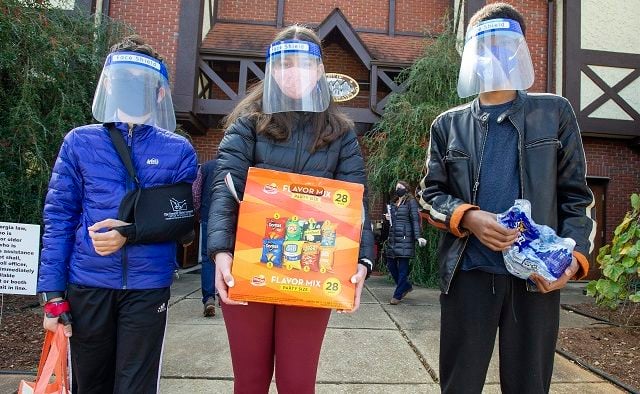 Decatur, GA — Voters throughout Decatur and surrounding areas took to the polls on Tuesday, Nov. 3, to cast their ballots for president and other local elections.

Many polls didn’t have any long lines and also saw fewer voters than expected. Many voters and poll workers believed this was because a lot of people voted early or used an absentee ballot.

The final election result for DeKalb County wasn’t known as of midnight on Nov. 3.

One poll worker at Israel Missionary Baptist Church in Kirkwood said 290 voters had cast their ballots at the polling place as of 5:40 p.m. and the location usually sees over 1,000 voters. At Legacy Park in Decatur, only 80 voters had voted in person at the Cochran Building as of 6:45 p.m.

Many voters had positive experiences at the polls with little to no lines and waiting times.

Kiki Kantzas-Allen voted at Lakeside High School in Atlanta and waited for 20 minutes because she, her husband and her son arrived at the poll at 6:40 a.m. and the poll opened at 7 a.m. There were about 30 people in line at 7:10 a.m.

Kantzas-Allen’s husband, Mark Allen, was a first-time voter in the United States as he became a citizen this year. Allen, originally from Australia, went to the polls with a small American flag in hand ready to cast his vote.

“It was good,” Allen said. “Not getting vocal by anybody out here which is good.” 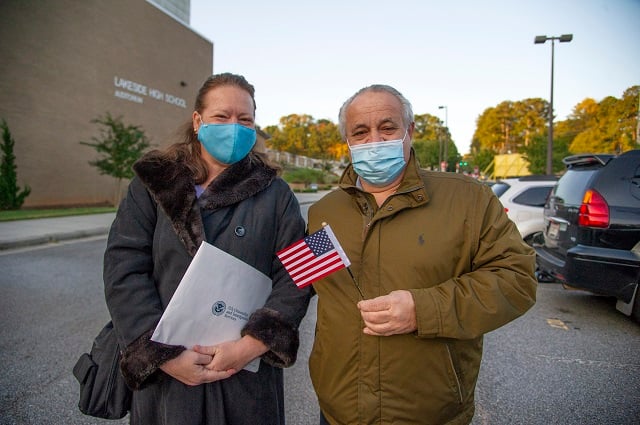 Originally from Australia, Mark Allen on right, voted for the first time as a U.S. citizen along with his wife KiKi Kantzas-Allen who holds his naturalization papers and his son at Lakeside High School in DeKalb County on November 3, 2020. Photo by Dean Hesse.

In Australia, people campaign at the voting places, Kantzas-Allen explained.

“My theory is if you don’t vote, you can’t have an opinion either way,” Allen said.

Decatur resident Nina Johnson had no issues and didn’t have to wait to vote at the Decatur Recreation Center. She arrived at the polling location wearing a jacket with the letters of her sorority, Alpha Kappa Alpha, since she and vice presidential nominee Kamala Harris were a part of the same sorority.

“If you want the experience of voting on Election Day, I knew that I could do that here. I think we’ve hardly ever had to wait but again, like I said, I know that’s not everyone’s case. I’m so glad that with two precincts combined together that we were still able to get in and out,” Johnson said.

She chose to vote on Election Day due to the history and tradition of the day.

“I think it’s also just the privilege knowing that I wouldn’t have to wait and being in Decatur to know that there would be some safety in doing it on the day,” Johnson said.

“It’s a historical moment to have the first African-American female vice president,” she added. She said in general she wants “the United States to be back united and democracy to be restored and so that we all can have a voice.” She said that she hoped the country could come together, in spite of its disagreements.

Some polling places in Clarkston additionally had no lines and short wait times. About 70 people were lined up at Clarkston First Baptist Church early in the morning but all were done within about 30 minutes, according to Aimee Ahmed, a volunteer poll warmer at the church. 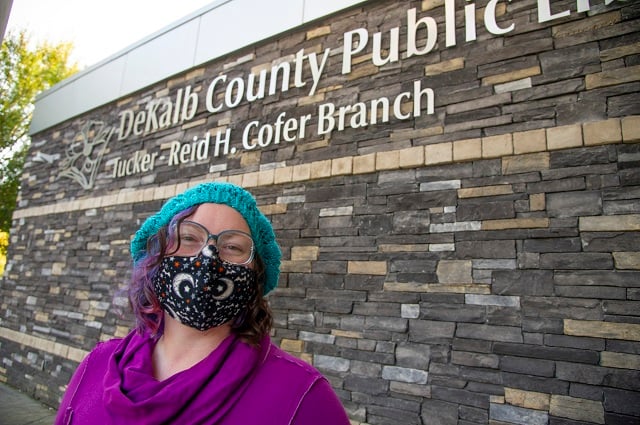 Poll Warmer Lauren Newlands handed out hand warmers to voters who were cold at the Tucker Reid H. Cofer Library polling location in Tucker on Nov. 3, 2020. Photo by Dean Hesse.

Poll warmers were out and about at various places making sure that voters had food and water if there were long lines. Some also had hand warmers and hand sanitizer.

Clarkston resident Audrey Simmons did not experience any issues while voting and said it was a smooth experience. She said she always votes on Election Day.

“Voting is a privilege. There are some countries where you don’t have the opportunity to vote and to participate in the governance of their country so I’ve always regarded it as a privilege, not something to be taken for granted,” Simmons said.

“So that’s why I always come on Election Day to vote as a sort of statement and to honor the people in this country who fought for the right of people like me to be able to vote so that means a lot to me,” she added.

Another resident, Tangie Smith, also had a good experience and was excited when she exited the polls. She voted on Election Day because she liked the rush and wanted to wait in a line, although there was not a line at Clarkston First Baptist Church when she voted.

“(I was excited) because if I didn’t (vote) then there’s no way that I would be able to speak up and have an opinion about anything as far as politics so I felt like it was my right and of course I’m going to use my right,” Smith said.

Some other highlights from throughout the day include:

– There was no line and no voters at Livsey Elementary School in Tucker around 9 a.m. A security guard expected bigger crowds around the lunch hour and when people got off of work.

– There was also no line at Oakhurst Baptist Church around 5:30 p.m. 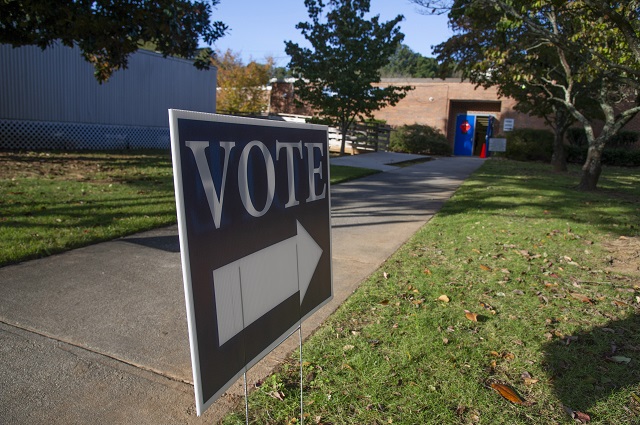 Various volunteers were at the polls as well as poll warmers, poll watchers and poll chaplains. Some were also there to provide entertainment.

Paul Capps, senior pastor at Peachtree Baptist Church, was stationed at Briarlake Elementary School and was part of a group called Lawyers and Collars that sent clergy members and lawyers to the polls to protect voters.

“Now more than ever we need peace even if we don’t really understand what that looks like right now,” he added.

Other volunteers, like Lauren Newlands, who lives in the Tucker area, were visiting various locations to provide voters with supplies like food, water and hand warmers.

If the voting line is long, she could also stand in line for someone if they need to step out of line to use the restroom.

She volunteered to be a poll warmer because she doesn’t want anyone to be disenfranchised.

“So far we haven’t had any crazy lines in the areas of town that I live in but I’m always worried about it. I just want to do my part. I voted early and then took the day off,” Newlands said.

A group of Renfroe Middle School Students was also handing out snacks to voters and poll workers in Avondale Estates and Decatur.

Seventh-grader Justice Nessman organized a group of 11 volunteers, students and parents, to support voters and help them have a good, comfortable experience. He also received food donations from the Kroger on Commerce Drive in Decatur.

“(My sister) said something about when our dad was going to vote there’s going to be a long line and to bring him stuff. I was like ‘how about we give to all of the people in long lines like food and water,’” he added. 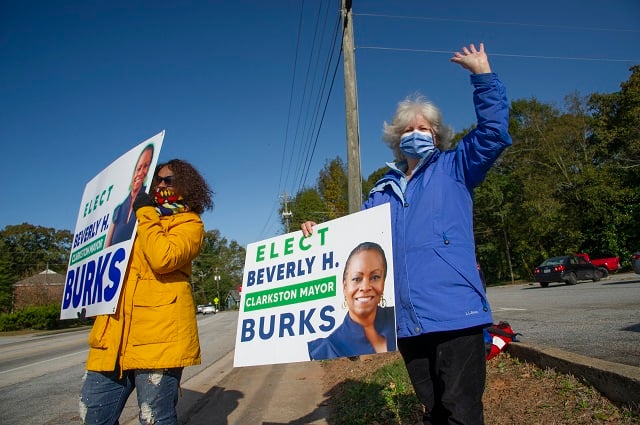 Some people were also at the polls to provide entertainment to voters and passersby. A group of musicians was playing a saxophone, drums and a violin at Legacy Park in Decatur.

Kirkwood resident Andrea Zoppo was out in the street by the entrance of Israel Missionary Baptist Church wearing a sparkly clown costume and was waving American flags while dancing. She was with a friend who wore a Statue of Liberty costume and waved rainbow flags. The two women have worn their costumes all over the state to encourage voters for the past month.

They were at the church on Tuesday as part of a mobilization effort of entertainers all over the state through the New Georgia Project.

“I felt like you don’t see people proud of the red, white and blue. It seems like only one side has kind of taken those colors and being that my family are immigrants on both sides, and are refugees, we’ve always been really proud to be here in this country. We all work with civil rights and defining our voice. I felt like it was important to show that we can all be proud of our country and really reflect on what it means,” Zoppo said. “Democracy is a living, breathing institution. You have to believe in it for it to be real.” 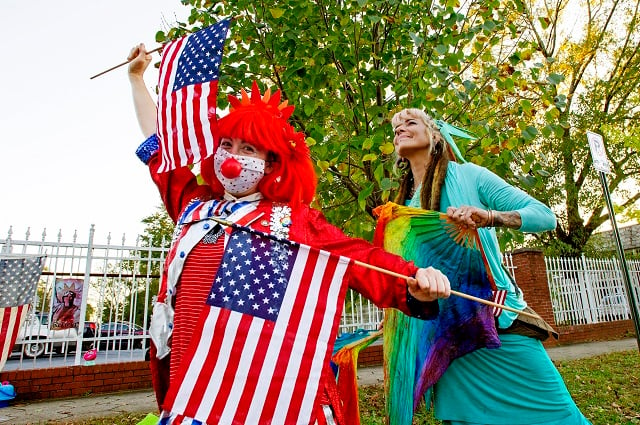 Andrea Zoppo “Miss Ladybug” (l) and Melanie Sharon spreading joy and according to Zoppo trying to make people feel proud of our country in front of the polling location at Israel Missionary Baptist Church in Kirkwood on Tuesday November 3, 2020. Photo by Dean Hesse.

Here are more photos from Election Day 2020 in DeKalb County: 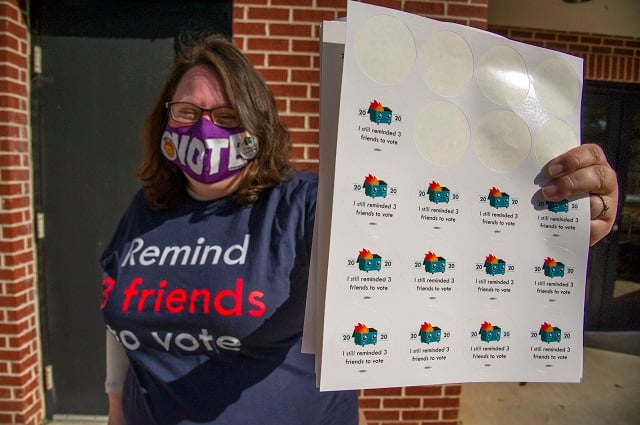 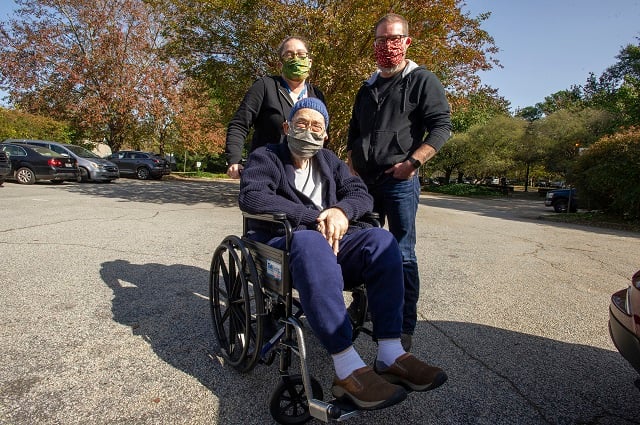 Catherine Aiken, her father George Reeves and Chris Place voted at the Avondale City Hall polloing location on Nov. 3, 2020. Mr. Reves said he normally votes early with his wife but was unable due to being in the hospital. Photo by Dean Hesse. 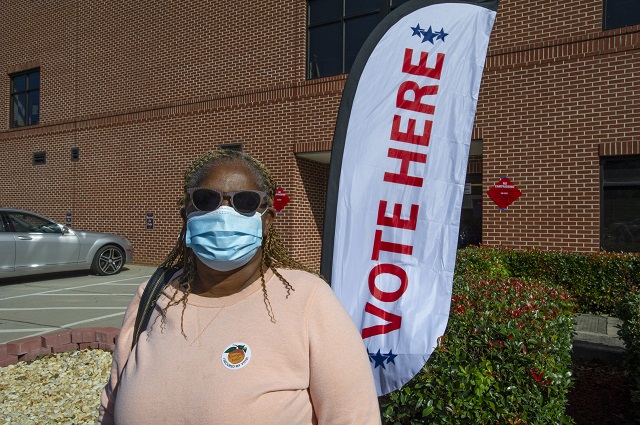 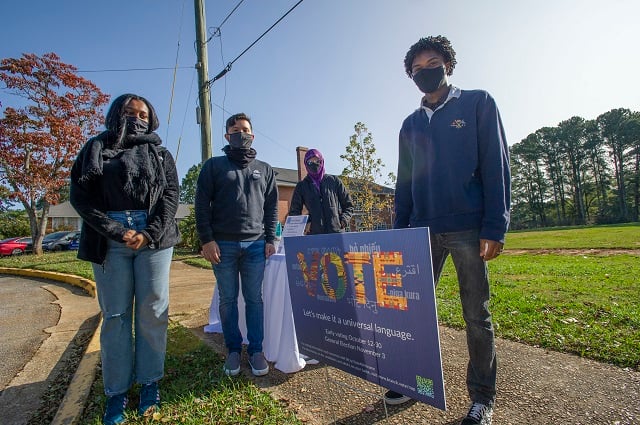 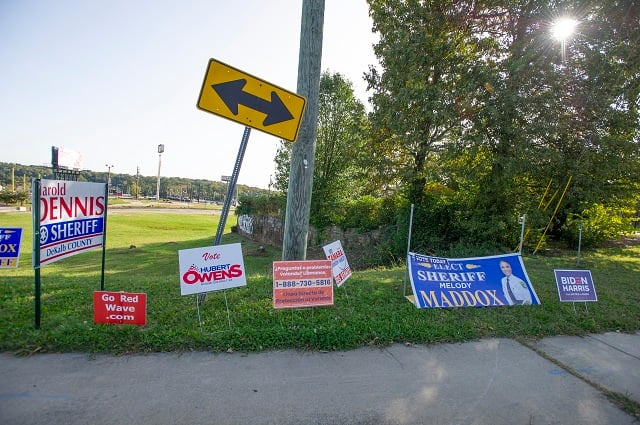 Campaign signs on the side of Northern Avenue near the DeKalb County Voter Registration and Elections Office in DeKalb County on Nov. 3, 2020. Photo by Dean Hesse. 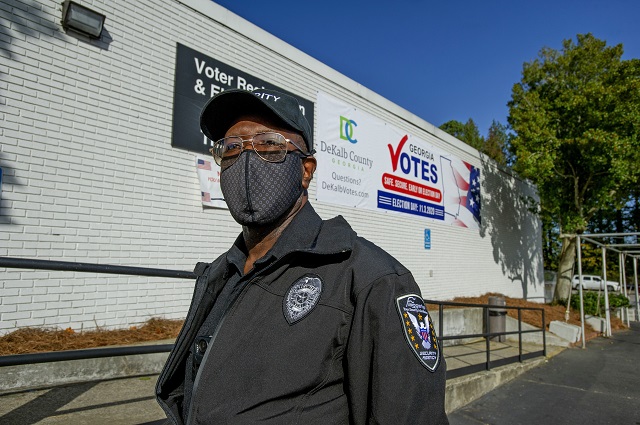 Officer Watts was busy Nov. 3rd helping people who showed up to vote at the DeKalb County Voter Registration and Elections Office with finding their proper polling location. Photo by Dean Hesse. 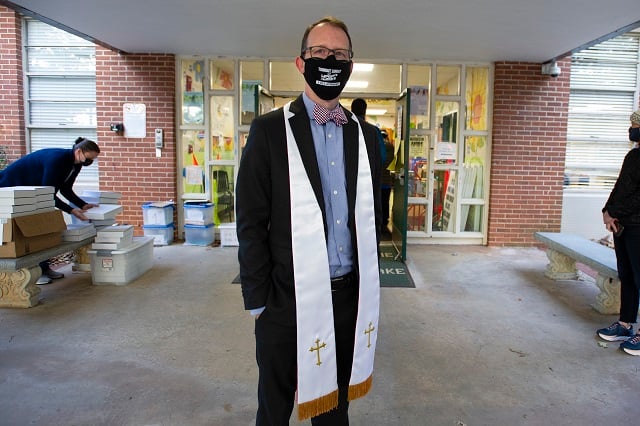 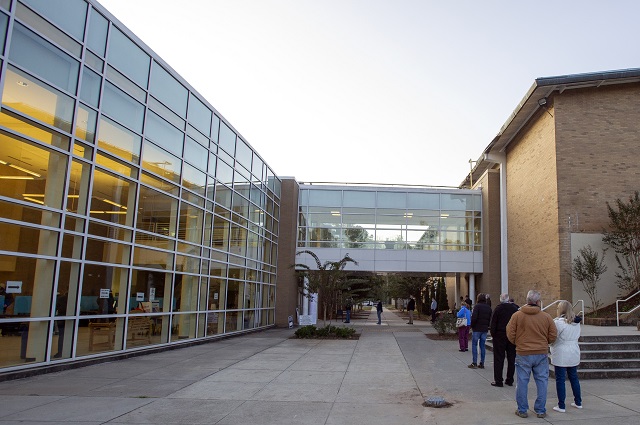 Voters line up outside of the polling location at Lakeside High School in DeKalb County around 8 a.m. on Nov. 3, 2020. Photo by Dean Hesse. 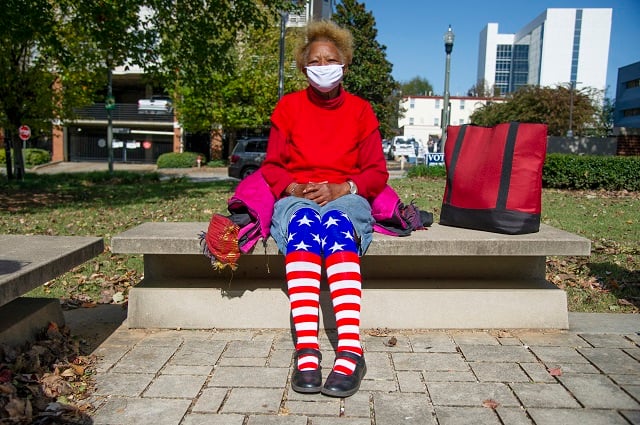 Sarah Elizabeth who said she voted early wears patriotic socks while sitting in front of the Decatur Recreation Center on November 3, 2020. Photo by Dean Hesse. 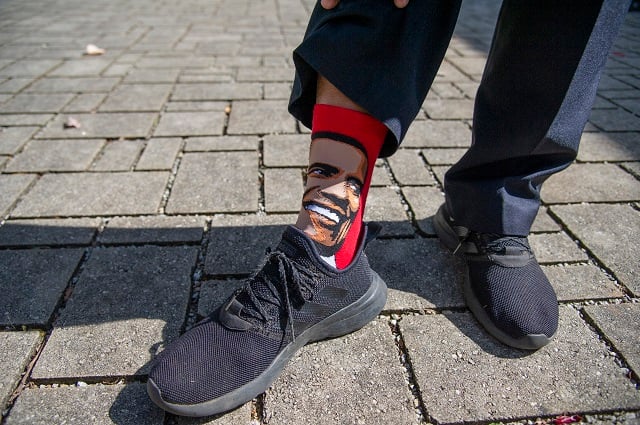 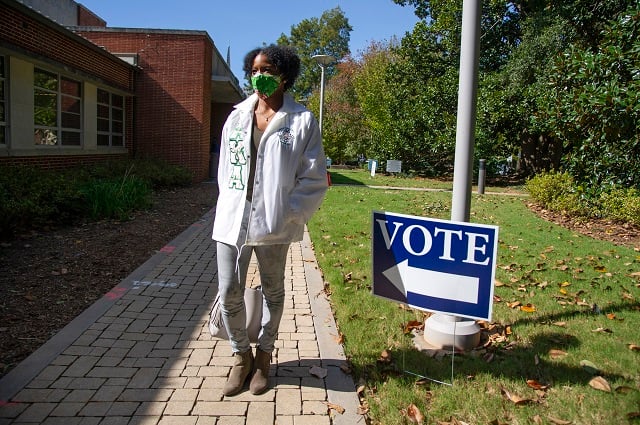 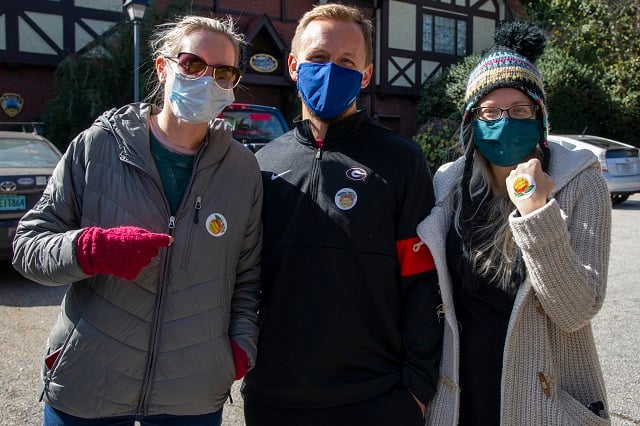 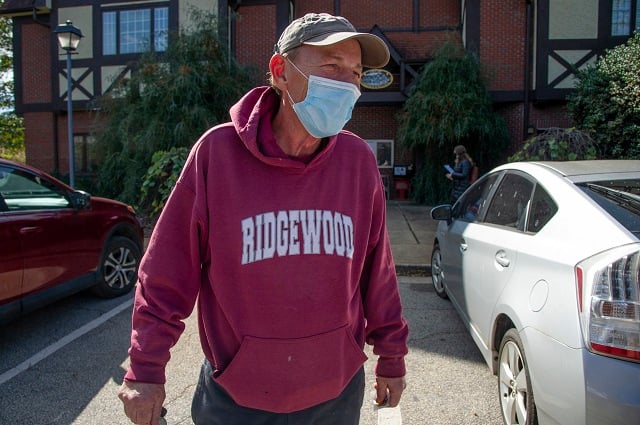 Bob Timm talks about his voting experience after castings his ballot at the Avondale Estates City Hall polling location on Nov. 3, 2020. Photo by Dean Hesse. 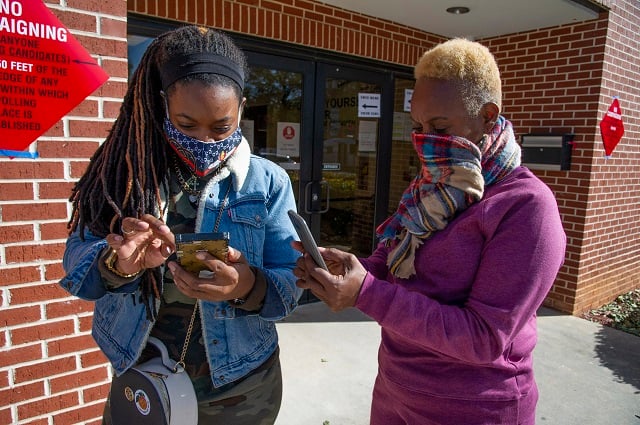 Tangie Smith (l) and Adrian Smith text friends to remind them to vote after casting their ballots at the Clarkston First Baptist Church polling location on Nov. 3, 2020. Photo by Dean Hesse. 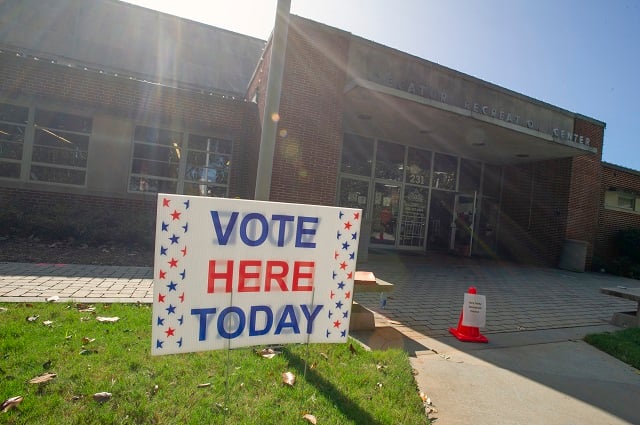 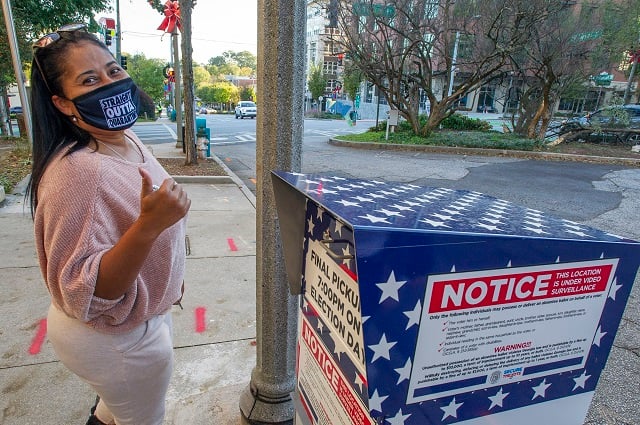 Yolanda Rose gives a thumbs up after placing her absentee ballot in a drop box in front of Decatur City Hall on Tuesday afternoon Nov. 3, 2020. Photo by Dean Hesse. 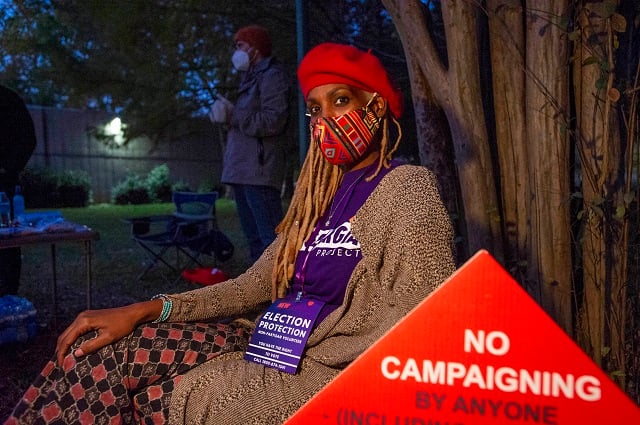 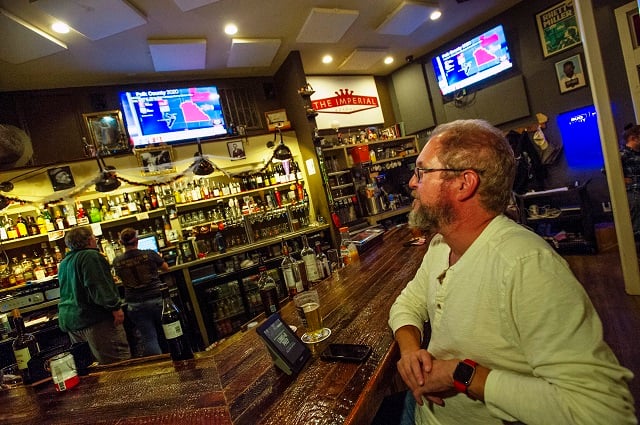 Todd Ellington, who said he voted early watches election returns at The Imperial in Decatur after the polls had closed on Tuesday evening Nov. 3, 2020. Photo by Dean Hesse. 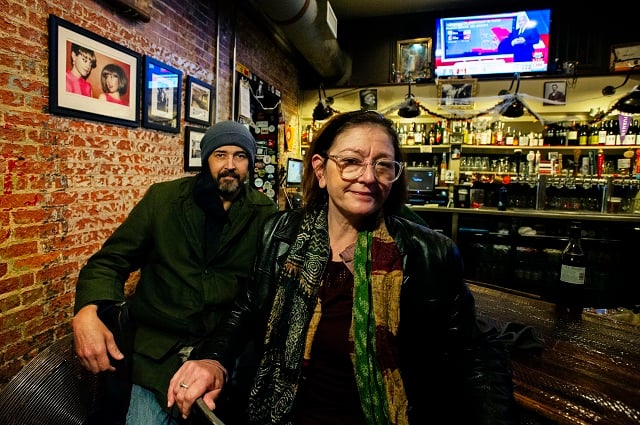 Stefan Persson and his wife Heather Winship from Pine Lake watch election returns at The Imperial in Decatur after the polls had closed on Tuesday evening Nov. 3, 2020. This was the first election Stefan, originally from Sweeden, has voted in as a U.S. Citizen. Photo by Dean Hesse. 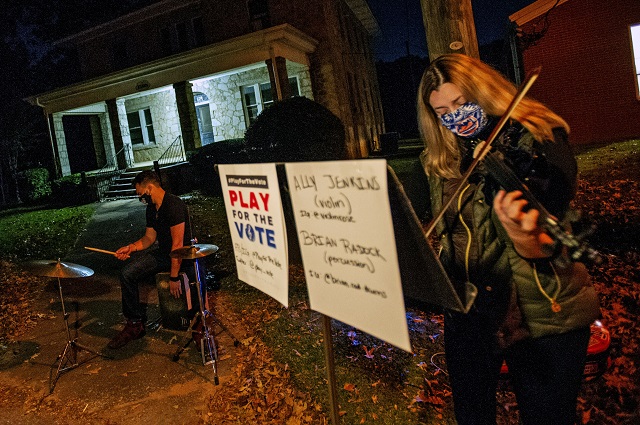 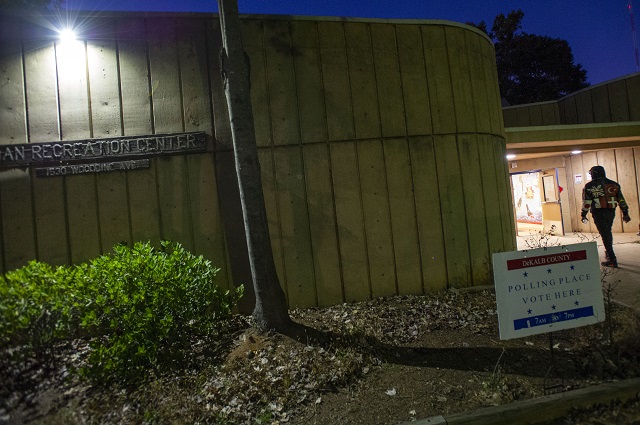 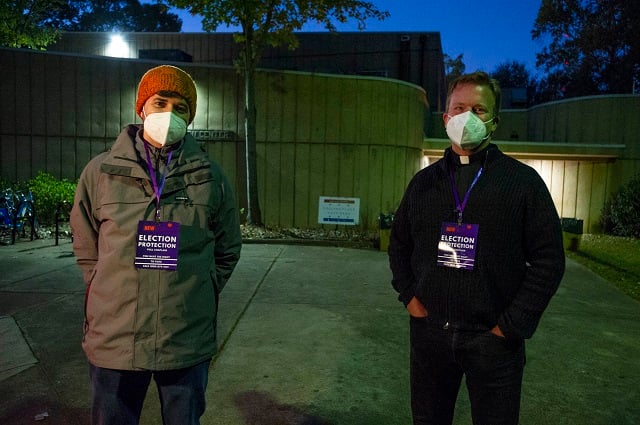