Decatur students ‘take the torch’ in fight for Civil Rights

Decatur students ‘take the torch’ in fight for Civil Rights 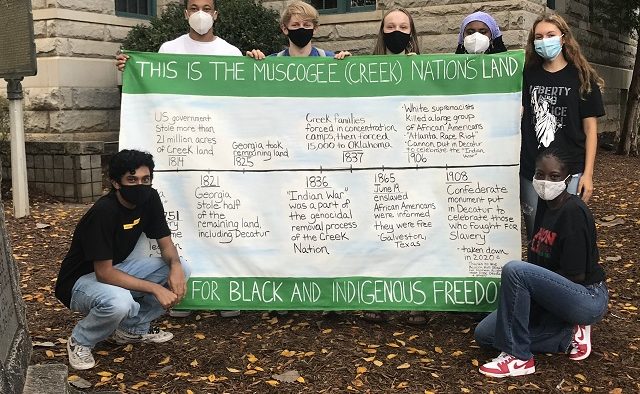 “They complained that my generation didn’t pass the torch to them,” Black said. “I got tired of hearing that for a while. I said to one audience, ‘Light your own damn torch.’”

Decatur High School seniors Genesis Reddicks and Dax Pettus are doing their part by helping lead the effort to get a historical marker placed at the Downtown Decatur site where Martin Luther King Jr. was arrested and illegally sentenced in 1960. And they’ve got their eyes on their next project.

“These two lit their own torch, and I was really impressed by that,” Black said Wednesday during a panel discussion about the effort hosted by the National Center for Civil and Human Rights.

The proposed marker near Decatur City Hall will educate residents and visitors about a little-known piece of Civil Rights history: when King was illegally sentenced to “public works,” otherwise known as a chain gang or hard labor, in a misdemeanor traffic case. According to the students’ research, King’s arrest, and the court’s sentence and incarceration of Dr. King, had a significant impact on the Civil Rights Movement and the political direction of the country when then-presidential candidate John Kennedy and Robert Kennedy intervened to free King from jail. This act contributed to Black voters in the South shifting parties and electing Kennedy over Richard Nixon in 1960.

Reddicks presented her and her committee’s research project, “Commemorating King,” to the Decatur City Commission in June. The commission agreed to become the third sponsor of the project. The Georgia Historical Society accepted the application for the marker in September, and it will be installed at the corner of N. McDonough Street and W. Trinity Place in March.

“Really we can’t make waves until we start addressing the issues and history of our local communities, the people around us,” Reddicks said Wednesday. “And I think this was a perfect opportunity for me to join on and have the opportunity to learn and share the story with the rest of my peers.”

“Decatur was known as Klan country, then all the way going to removing a Confederate monument in Decatur Square,” he said. “Learning and talking about our history is important to knowing who we are as a city.”

The Commemorating King research project will be given to the DeKalb History Center and the Georgia Historical Society, according to Mike Warren, a journalist who helped kickstart the project. And money left over from a fundraiser to install the marker will be used to spread the word about the project through seminars and other efforts.

“I’m hoping that the impact of this campaign and this project will motivate other students, other young people to step up, take the torch and better our community,” Reddicks said.

She and Pettus already have their next project in their sights: removing a cannon placed by the United Daughters of the Confederacy in Decatur Square in 1906.

Reddicks and other students took part in a rally to remove the cannon in October. The Beacon Hill Alliance for Human Rights began circulating a petition for the removal earlier this month.