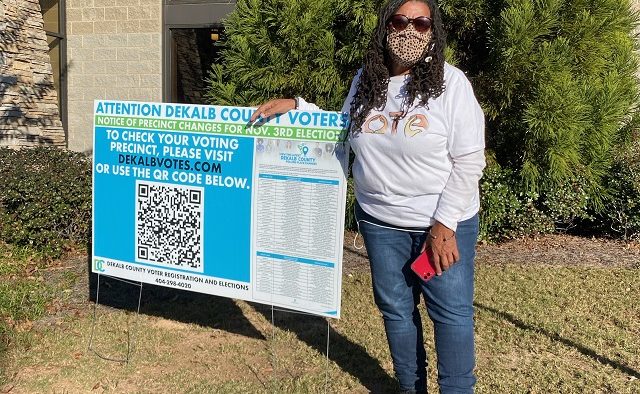 A woman wearing a DeKalb County elections department t-shirt, driving a truck full of signs, arrived at the Stonecrest Library to remove signs she said were out of date.

But volunteers stationed at the library, redirecting voters to Stonecrest Mall, refused to let her have the signs. They said the signs were necessary to inform voters where to vote.

It was one of the 32 polling place changes DeKalb County made at the last minute.

Today scores of DeKalb residents took to social media, reporting they were notified last night by mail that their polling location had changed. Most said they never received an email, phone call, or text.

Last week, Erik Burton, communications consultant, and Erica Hamilton, DeKalb Director of Elections, said they would make every effort to contact voters in this situation.

“I drove to the Stonecrest Mall so two voters could follow me,” said Pam Rock, a volunteer from Dunwoody. “Everyone is on heightened alert right now and emotions are raw.”

Rock arrived to volunteer just before 3 p.m., and within minutes the elections official tried to take the sign. Soon after, a representative from NAACP GA stopped by to check on the location, and Rock reported the activity.

The signs measure four feet by two feet, and are hard to read, said Howze. Signs were removed at Flakes Mill Road Fire Station and Ellenwood Library in South DeKalb, as well as Skyland in Brookline.

Howze questioned why the signs would be removed so late in the game. Howze contacted DeKalb County Elections board members Dele Loman Smith and Susan Motter, as well as Commissioner Larry Johnson.

Hamilton wrote an email to Houze in response to her questions.

At 4:25 p.m., Hamilton wrote, “Someone put up old signs. We sent a group to remove the old signs and they removed the wrong set.” Another email from Hamilton at 4:39 p.m. stated, “The signs have been placed back in their location.”

But according to Houze, “Contrary to what Director Hamilton wrote, the sign at Flakes Mill fire station is one that had not been replaced by 5 p.m. I’m guessing there are more.”

DeKalb elections officials did not have any additional information. Decaturish reached out to elections board members but did not receive a response.