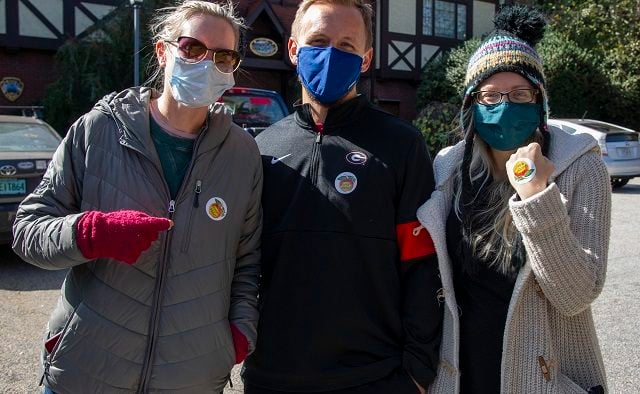 DeKalb County, GA — DeKalb County has completed its unofficial count of votes in the Nov. 3 election but with about 61,367 votes remaining statewide, there’s a real chance Donald Trump could lose Georgia to Joe Biden.

About 200 ballots in DeKalb County still need to be corrected. Biden won DeKalb County with 83 percent of the vote and received 305,197 votes here, compared with Trump’s 57,993 votes and libertarian candidate Jo Jorgensen’s 4,169 votes.

Here’s the full announcement from the DeKalb County Elections Board:

Please note that the official results are scheduled to be certified by the DeKalb County Board of Registrations and Elections on Friday, Nov. 13, 2020.

DeKalb County has 201 ballots that need to be cured and each voter is being contacted by phone or overnight mail. Voters have three days after being contacted via call or mail to provide the necessary information to confirm their vote.

Additionally, Uniformed Overseas Citizens Absentee Voting Act (UOCAVA) will also be factored into DeKalb’s final certified tabulations. To date, DeKalb County has received 1,753 UOCAVA ballots. Applicable DeKalb County voters have until 4:30 p.m. on Friday, Nov. 6, 2020, for their ballots to arrive in the office. UOCAVA ballots must be postmarked by Nov. 3, 2020, to be accepted.

DeKalb County also has approximately 1,600 provisional ballots, which are given to voters who cannot meet all the requirements for voting at the time of the election. The provisional ballot will count if the issue is solved within three days after Election Day.

With counting continuing in numerous counties throughout Georgia, Secretary of State Brad Raffensperger said that as of 9:15 a.m. today there are approximately 61,367 ballots still outstanding.

“Officials in numerous counties are continuing to count ballots, with strong security protocols in place to protect the integrity of our election,” said Raffensperger. “We have long anticipated – and said publicly – that counting would most likely take place into Wednesday night and perhaps Thursday morning. We’re on pace to accomplish that responsibly, ensuring that the voice of every eligible voter is heard. It’s important to act quickly, but it’s more important to get it right.”

Raffensperger noted numerous security measures in place to secure the vote and increase public confidence in the electoral process:

– State monitor is in the room with Fulton County for all counts and the public is welcome to observe any county as an added layer of transparency.

– A pre-certification audit will provide additional confidence that the votes were accurately counted.

“We’re well aware that with a close presidential election and the possibility of runoffs in some elections that the eyes of the state and the nation are upon Georgia at this time,” Raffensperger said. “We’re as anxious as anyone to see the final results and to start work on certification and planning for our runoff elections. As the work goes on, I want to assure Georgia voters that every legal vote was cast and accurately counted.”

According to Atlanta Journal Constitution political reporter Greg Bluestein, Democrats are claiming the number of ballots remaining could actually be higher than what the Secretary of State is reporting.

The Secretary of State’s office just said there are actually roughly 61k absentee ballots still out, though Democrats say the remaining total is likely to be higher. A state elections official described it as a “moving target” across Georgia’s 159 counties. Stay tuned. #gapol pic.twitter.com/vuSdJ2299Z

Trump has filed a lawsuit regarding ballot counting in Chatham County, Ga, home to the city of Savannah.

According to The Hill, “The Trump campaign on Wednesday filed a lawsuit that seeks to require election officials in Chatham County, Ga., to identify and separate allegedly late-arriving mail ballots, presumably so the votes can be more easily tossed if the campaign ultimately prevails in its legal challenge.”

Bluestein reported 11:26 a.m. that the lawsuit has been dismissed.

Just in: A judge has dismissed this lawsuit from the Trump campaign and the Georgia GOP alleging that Chatham County elections officials improperly counted absentee ballots received after the state’s deadline. #gapol https://t.co/w1j8Jqzn8e

The DeKalb County Elections Board also said its plans for absentee ballots made it easier for voters to participate in this election.

DECATUR, Ga.—From the very beginning of the 2020 election cycle, DeKalb County has been committed to providing every citizen equal access to the ballot box by mailing both active and inactive voters absentee ballot applications.

This number represents almost 25 percent of the DeKalb electorate, up from 4 percent that returned absentee ballots in both 2016 and 2018.

DeKalb is equally as committed today as the county ensures that every vote is counted, whether it was cast by mail-in ballot, advance voting, or on Election Day.