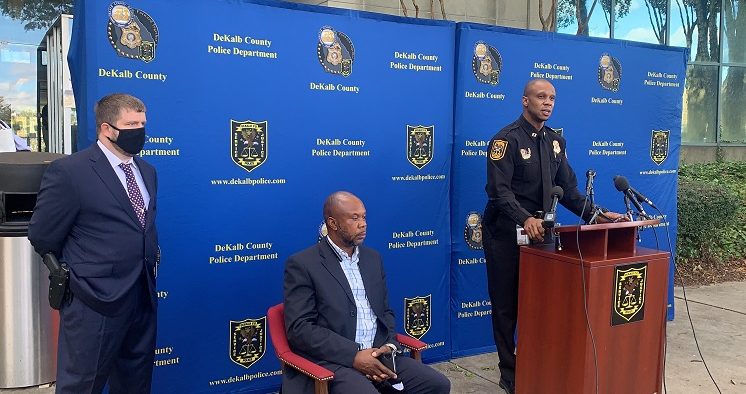 DeKalb County, GA — The DeKalb County Police Department joined an innovative program to help save the lives of residents with dementia, Alzheimer’s and other cognitive impairments who go missing.

The Project Lifesaver program provides wearable radio transmitters that can be tracked by police when a resident goes missing. It’s all about cutting down the amount of time it takes to find people with those impairments who wander off, according to Capt. Theodore Golden.

“If we don’t find them in the first 24 hours, there’s a 50 percent chance they’re going to die,” he told Decaturish. “That’s how serious this is. So we have to put all hands on deck in order to find these individuals. It’s like finding a needle in a haystack. This tool will give us the technology to pinpoint them.”

DeKalb police fielded 2,500 missing persons calls in 2019. Some 100 of those were people with dementia, Alzheimer’s or other cognitive impairments.

Forty-seven DeKalb police officers were trained to employ the Project Lifesaver tools. Then police reached out to caregivers for 17 residents who’ve frequently wandered off in the past.

“We reached out to their caregivers to see if they wanted to be a part of this project,” Golden said. “They loved the idea and signed up.”

Police have another 30 of the wearable transmitters available for residents. There is no cost to join, but residents and caregivers must meet some basic requirements before being approved. Then detectives go meet the resident and their caregiver to train them.

“That gives us an opportunity to get to know them a little better instead of waiting for an emergency to happen,” Golden said. “I can learn their tendencies, they can learn about me as a detective. Because more than likely, one of us will be the one going out to find that person.”

“We can dial in the exact frequency for that client and we will get a tone for that person,” Golden said.

Technology like this can be vital, according to Carolyn Hurst of dementia care facility The Madeline of Decatur.

“Our people who have dementia get confused very quickly, so any measure that can be taken to keep someone safe and has the ability to locate them quickly is a great value add,” she said. “When your loved one has dementia, it’s very hard to limit where they go because they feel capable. But it’s hard to watch someone 24-7.”

The Madeline is a secure facility that has parameters in place to monitor residents, Hurst added.

The Project Lifesaver program is personal to Golden. Two of his grandparents had dementia and would often wander.

“It’s definitely near and dear to my heart,” he said. “It’s a great tool.”

The Atlanta Police Department is also part of the Project Lifesaver program, according to Golden.