George on Georgia – Alex Jones in an armored personnel carrier

George on Georgia – Alex Jones in an armored personnel carrier 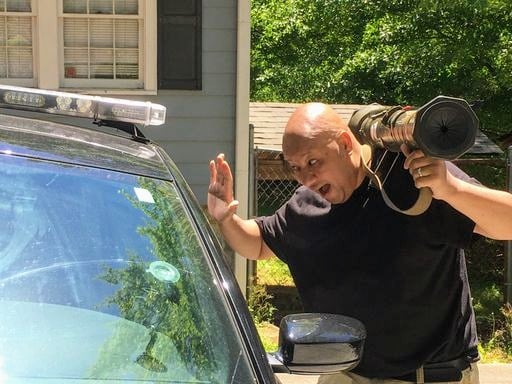 The temper tantrum of the far-right continues.

Last Wednesday and Thursday, Alex Jones rode around the Georgia capitol in a Canadian-made light armored personnel vehicle, standing in the turret bellowing impotent insurrectionist noise like some cross between a TJ Maxx Mussolini and Mike Dukakis.

It’s rolling theatre of the dumb, a 10 mile-per-gallon grift. I’m sure the families of the victims of the Sandy Hook shooting he defamed are thrilled.

At one point, Jones’ truck was trailed by a guy in a car blasting the anthem of this summer’s street protests, “F—k Donald Trump” by YG and the late, great Nipsey Hussle. Two Proud Boys standing at the protest shouted a sarcastic comment about his manhood, then engaged in some meta-conversation about how important it is to emasculate people like that effectively. A living 4Chan thread unfolded before me.

As I observed this idiotic tantrum over the Georgia election results, and the militant demands of the far-right to set the election aside and just declare Trump the victor, I could not help but notice the relative indifference of the capitol police and the governor to this protest.

I was with protesters when about 60,000 people marched the streets in protest of Donald Trump in 2017. As the remarkably peaceful Women’s March rolled up to the capitol – high-fiving Atlanta police officers along the way – the state police posted snipers on the rooftops of the statehouse to mitigate a perceived threat.

When anti-police brutality protests broke out this summer, the governor activated the National Guard and ringed the capitol with a light infantry company. Atlanta at night felt like occupied France. I accept that conditions might have been a hair different: protesters at one point managed to set a fire at the Georgia State Patrol headquarters. But a militarized police response came under strong public criticism for its excessiveness.

So here we are. A man is circling the capitol in a vehicle designed to repel rifle fire, in the company of the white supremacist Proud Boys – an organization with a history of violence – calling on people to physically prevent the certification of the vote.

Cody Hall, Kemp’s press secretary, referred me to the standing order calling up the National Guard when I pointed out the disparity in response. “Your assertion that law enforcement personnel are not prepared to quickly respond to any need at the state capitol is incorrect.”

I was, briefly, a cavalry scout in a National Guard unit before entering active duty military service. I was looking around for a cop with an AT-4 launcher, just in case … but no. It might as well have been another Thursday at the capitol for all the militarized response.

The double standard bothers me. But honestly, I’m a bit torn.

A Black Lives Matter demonstration puts thousands of people in the street here. The pro-Trump goon squad barely filled the capitol steps. Jones and his lot might have drawn three hundred people. At least half had come from out of state. People told me they had come from Arkansas and Texas and South Carolina. Cops hustled two people unloading hand-made signs from parking their car from New York in front of the building.

A chant rose from the crowd. “Groyper, groyper, groyper,” in support of Nick Fuentes, an Internet avatar of white nationalism. Fuentes went on about being attacked by “globalists” and other antisemitic dog whistles. It’s street theatre designed to maintain a lucrative Internet audience. An upgunned police response dignifies it. It would imply these people are threatening. Treating them like a ladies tea while posting snipers for the Women’s March strikes me as emasculating. I’m sure the Proud Boys would agree.

But Georgia has a history. Even as Fuentes told the crowd the lie that “Black Lives Matter is out there every day smashing windows and vandalizing our monuments,” a ring of white nationalist terrorists is in a federal prison awaiting trial for plotting acts of violence and running a terrorist training camp in Floyd County. FBI Director Christopher Wray pointedly identified white nationalist violence as a significant threat to election security in congressional testimony two months ago.

One might expect law enforcement leaders to use consistent, objective threat criteria to determine when and how to deploy militarized resources. What I saw last week beggars that argument.