Stonecrest, GA — The Sears at Stonecrest is like the great hall of Durin for shoppers of yore, an empty consumer mausoleum. But at least for a day, Stonecrest’s voters held a picnic in the graveyard.

Above the door hung a giant “VOTE HERE” banner. The city had appropriated the empty retail space as a voting precinct. The tap of a footfall carrying across the football field-wide emptiness echoes, perhaps, as a metaphor for a civic system that has to address real problems.

“It’s a blank canvas,” said Brandon Riley, Stonecrest’s director of parks and recreation, of the space as we sat for a while watching voters trickle in. “I want a space that’s productive for the community. But you want some direction. What you need to do is listen to the community. … I think it’s very important for people to vote. This is your right and your duty. If you don’t vote, you don’t have any say so.”

Like all the precincts I visited in DeKalb today, voting was light. Only about 123 people had voted at Stonecrest by 1 p.m. or so, said Rutha Stanford, the location’s poll manager. One might guess that most people had simply voted early or absentee; there weren’t too many people left to vote on Election Day.

I walked Nakeem Robinson, 28, back to his car after voting.

“It’s 2020. You have to participate,” he said. Robinson was a Biden voter. “They know what they’re doing,” he said of Biden and Kamala Harris. “Donald Trump doesn’t.” 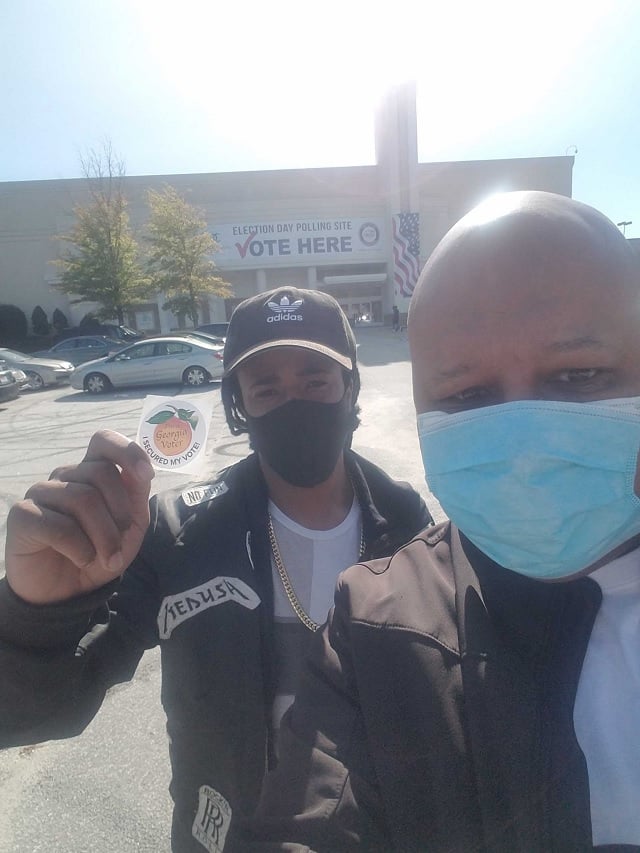 But things seemed quiet Tuesday afternoon. Voter counts at the precincts there weren’t running much higher than those in south DeKalb. About 200 voters had cast ballots Tuesday at both Dunwoody Library and The Church at Chapel Hill. Ebrima Mbowe turned 18 about three months ago. He came to vote in person with his absentee ballot in hand, which he received only about a week ago. He didn’t trust the post office enough to expect it to count if he mailed it. He’s a Biden voter, but not out of particular affection for the man, he said.

“Trump is going out of his way to undermine democracy,” he said.

I asked him what he would want someone reading this 30 years from now to know about what he was thinking today.

“I’m a citizen. Everything is political,” he said. “Just vote.”

I would like to acknowledge to someone important to me that I am perfectly capable of missing the obvious in the moment. Dr. Spero Karas was serving today as a poll observer at Tucker Library. He is a distinctive man, built like a professional wrestler, and a highly regarded orthopedic surgeon. He also repaired my left arm after a horrific muscle tear two years ago. His work was extraordinary; it saved the usefulness of my arm.

And when I saw him this afternoon, I realized that I recognized him, but I couldn’t place where. Today has been a parade of “George! I read all your stuff!” and me nodding and smiling sheepishly and not connecting names to faces behind masks. But this was just me being stupid, Dr. Karas, I think you’re awesome. Please, someone who doesn’t have to socially distance, hug this man for me. Thanks.