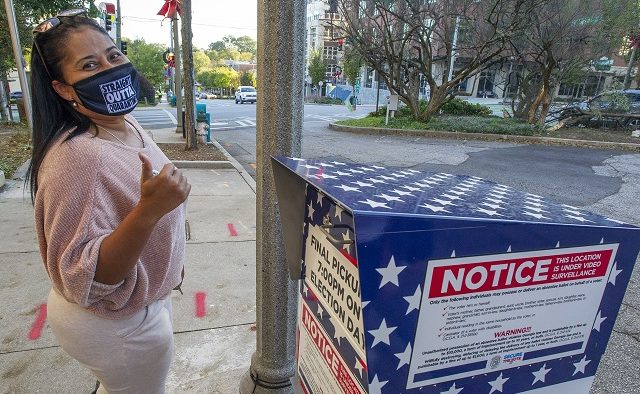 Yolanda Rose gives a thumbs up after placing her absentee ballot in a drop box in front of Decatur City Hall on Tuesday afternoon Nov. 3, 2020. Photo by Dean Hesse.
Share

This coverage is made possible through Votebeat, a nonpartisan reporting project covering local election integrity and voting access. The article is available for reprint under the terms of Votebeat’s republishing policy.

While absentee voting was used on a large scale for the first time during the Civil War, it really took off this year, as states encouraged the practice broadly during the coronavirus pandemic. In Georgia, more than six times as many people cast an absentee vote by mail in the 2020 presidential election than in 2016.

According to the secretary of state’s office, President-elect Joe Biden had almost double the absentee-by-mail votes as President Donald Trump – almost 850,000 for Biden compared with about 450,000 for Trump.

But ironically, it was a Republican Legislature in Georgia, under the governorship of Sonny Perdue in 2005, that introduced no-excuse absentee voting.

“And the Republican apparatus continued to be set up for that, so that even this year, as the president was raising questions about the reliability of doing absentee voting, the Republican Party was sending out mailers encouraging people to vote absentee.”

Bullock said that the number of absentee ballots in Georgia counted for Biden goes to show that more people listened to the president than the party.

According to data from the secretary of state’s office, the counties with the highest percentages of absentee ballots requested were also those counties where Biden won by some of his largest margins.

Biden won in seven of the eight counties where more than 30% of registered voters requested absentee ballots, and in six of those – Talbot, Hancock, DeKalb, Taliaferro, Clarke and Richmond counties – he won more than 60% of the vote.

“It’s ironic that Republicans in the Legislature and the Republican secretary of state have been sort of leading the way for absentee-ballot reform and the ease of voting, and it’s now benefiting the Democratic Party,” said Kennesaw State University political scientist Kerwin Swint.

“But they see that as just them doing their jobs responsibly, whether it benefits Democrats or Republicans, and there’s something to be said for that.”

Republicans and Democrats agree on the need for secure, accessible elections, but there is still disagreement over the role of absentee voting in that.

“There’s always a balance in these laws, which is what we all want, to increase accessibility of voting, but we also have to maintain the integrity of process. Because if people lack confidence in the process, then the whole democratic system tips on its heads, and it’s over,” he said

Democratic state Sen. Elena Parent introduced a bill earlier this year that would have instituted “rollover” absentee voting, allowing Georgia voters to receive absentee ballots after applying once without having to reapply each year. The bill did not receive a hearing in the Republican-controlled state Senate.

Parent said that having voters reapply every year is a waste of time and money for election boards. She argues absentee voting is secure and takes the pressure off polling locations on Election Days.

“I think there is a stronger paper trail with absentee ballots than I do with the piece of paper with the barcode that comes from the voting machines,” said Parent.