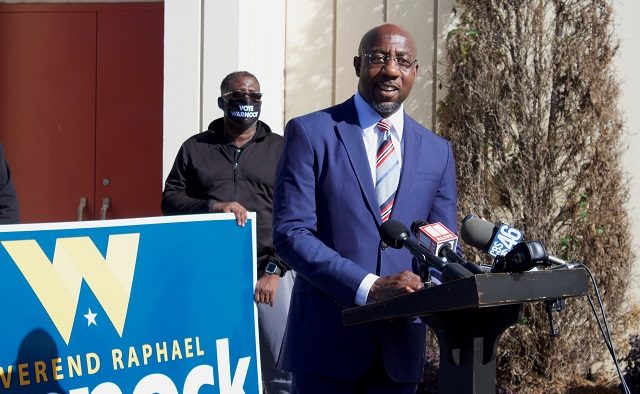 FILE PHOTO: Rev. Raphael Warnock held a press conference in Atlanta and was joined by several labor leaders. He discussed his support of expanding access to health care and encouraged people to get out and vote. Photo by Zoe Seiler
Share

Atlanta, GA – The Rev. Raphael Warnock hosted a virtual webinar on Monday, Nov. 16, to discuss Sen. Kelly Loeffler’s health care plan as well as some of his goals related to health care.

On the campaign trail, Loeffler has said she supports expanding health care coverage through a market-based approach rather than a government-supported program like a public option for consumers seeking health insurance or Medicare for All, according to the Atlanta Journal-Constitution.

Warnock said at the press conference that he supports the public option and was disappointed when it didn’t pass with the first iteration of the Affordable Care Act.

Individuals with pre-existing conditions are currently covered under the Affordable Care Act which is facing a challenge in front of the Supreme Court from Republican state attorneys general. The future of the ACA is unclear. The ACA also allows adults up to 26 years old to remain on their parents’ health insurance plans; bans annual lifetime caps; and provides optional Medicaid expansion for states that choose to opt-in, the AJC reported.

Medicaid expansion is a central feature of the ACA and the federal government pays 90% of the cost of covering people through the expansion, the Associated Press reported.

Warnock would like to see Georgia expand Medicaid, as it is one of 12 states that have not done so, he said.

“I would like to put forth a legislative solution that would allow us to benefit from the same deal even though we’re coming in late. Already it doesn’t cost us much at all to expand Medicaid but I’d like to make it even easier,” Warnock said.

Andy Slavitt, the former acting administrator for the Centers for Medicaid and Medicare Services, was a panelist on the webinar and criticized Loeffler’s health care plan saying it’s far from what the country needs.

“There’s such a thing as guaranteed issue which means essentially that if you apply for insurance you have to get it but what it doesn’t say is what kind of coverage, what kind of issue, the rules around it or anything else,” Slavitt said.

Guaranteed issue is a requirement that plans must permit someone to enroll regardless of health status, age, gender or other factors that might predict the use of health services. In some states, guaranteed issue doesn’t limit how much an individual can be charged if they enroll, according to healthcare.gov.

Warnock said he wants to strengthen the ACA, extend the benefits, drive down insurance costs and make sure that everybody is covered. He believes that health care is a human right.

“I agree with Martin Luther King, Jr., that of all the injustices inequality is the most shocking and the most inhumane. I believe that health care is a human right. It is certainly something that the richest nation on the planet can and ought to provide to all of its citizens and that’s why I’ve been such an advocate for health care,” Warnock said.

He went on to criticize Loeffler saying she isn’t serious and is playing a cynical political game.

Everyone should feel like they have a stake in health care and in legislation, Warnock said, stating that if someone doesn’t have a pre-existing condition that means they don’t have one today.

“That can change at any moment for a whole range of reasons, many of which are out of our control. so we’re tied in this together. We’ve got to make sure that people with pre-existing conditions, 1.8 million Georgians, are covered and insurance companies cannot discriminate against them,” he said.

Slavitt went on to say that Loeffler is trying to claim that she is in favor of covering people with pre-existing conditions, expanding care and improving affordability.

“Unfortunately what I learned in her plan was that she is promoting plans which do not cover pre-existing conditions at all, that she’s promoting plans that do not require insurance companies to cover COVID, that she is supporting efforts to overturn the Affordable Care Act which would reduce coverage for people in Georgia by about 340,000 people,” Slavitt said.

Decaturish reached out to Loeffler’s campaign and has not received a response.

Warnock has yet to release his health care plan and says the campaign will do so throughout the election. Overall, he supports strengthening the ACA, providing coverage to everyone, lowering prescription drug costs and insurance, and expanding Medicaid.