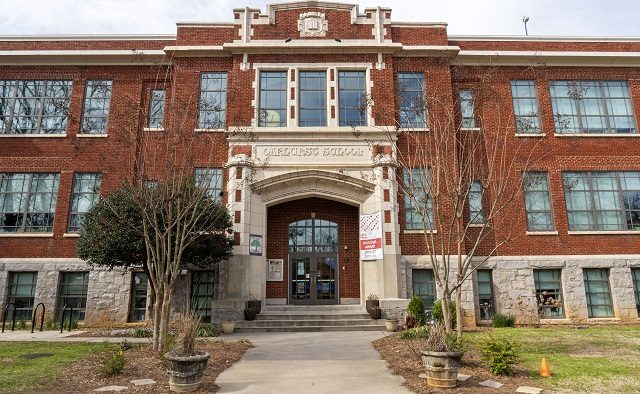 Decatur, GA — Parents who had children enrolled in Decatur schools between the fall of 2017 and the fall of 2019 received an unsettling letter this week.

City Schools of Decatur officials are asking them to take a survey in order to document any episodes of sexual assault or harassment in school bathrooms. The survey is an attempt to resolve a complaint that a gender-fluid boy assaulted a girl in an Oakhurst Elementary bathroom in 2017. District officials said the assault never happened and an investigation by the Department of Education couldn’t substantiate the claim. The district also is the target of the federal lawsuit filed by the mother of the alleged victim. That case is pending.

Courtney Burnett, a spokesperson for the district, said the survey sent to parents is part of the resolution agreement with the U.S. Department of Education’s Office for Civil Rights.

“The survey was sent to families and staff that were at Oakhurst between 2017 and 2019 as a part of the resolution agreement related to the OCR complaint filed in 2018,” she said.

The survey sent to parents was sent by Lillie Huddleston, the district’s Title IX coordinator. Title IX is a federal law that protects students from discrimination.

“City Schools of Decatur had a complaint lodged with the U.S. Department of Education’s Department of Civil Rights June 1, 2018, regarding District policy AR 2.4b.1.section C. that permits students to use bathrooms and other gender-segregated facilities corresponding to their gender identity,” the letter about the survey says. “In order to resolve the complaint, the district has agreed to poll parents who had children in the District from Fall 2017 – Fall 2019 regarding whether they have a recollection of any inappropriate incident (e.g. sexual harassment or sexual assault) related to a school restroom during that span of time.”

The OCR investigation began in 2018. In addition to being unable to substantiate the assault claims, OCR concluded the school district did not retaliate against the mother of the alleged victim by reporting the allegations to the Georgia Division of Family and Children Services.

But OCR did find problems with the way the district handled the complaint.

City Schools of Decatur Superintendent David Dude said the problems with the way the district handled the investigation are similar to the ones Decaturish uncovered in 2017 while reporting a story about how the school district handled allegations against a teacher accused of sexually harassing students. Dude said at the time the alleged assault happened, November 2017, the school district had not clearly defined who the Title IX coordinator was.

The problems that OCR uncovered would’ve been ones that the district would’ve already been aware of through Decaturish.com’s reporting. The story about the Decatur High teacher was published in June of 2017. The alleged assault occurred five months later.

The OCR report criticized the district for not having proper procedures in place when it implemented the bathroom policy.

“The [school] district’s approach allows children of different biological sexes to mix in the bathrooms, an area where students may engage in misconduct out of sight of adult supervision,” the OCR’s Letter of Findings says. “Given the serious nature of the reports of harassment reportedly occurring in school bathrooms, one might have anticipated the district would be extra vigilant in providing a proper response under Title IX.”

The lawsuit seeks an unspecified amount of damages. Alliance Defending Freedom, an anti-LGBTQ group involved in the federal case against the district, in May 2018 sent a letter to the school system an ante litem notice of its intent to file a lawsuit over the alleged incident. The mother of the girl requested a $300,000 settlement and a change of the school system’s policy that transgender students are treated according to their preferred gender identity.