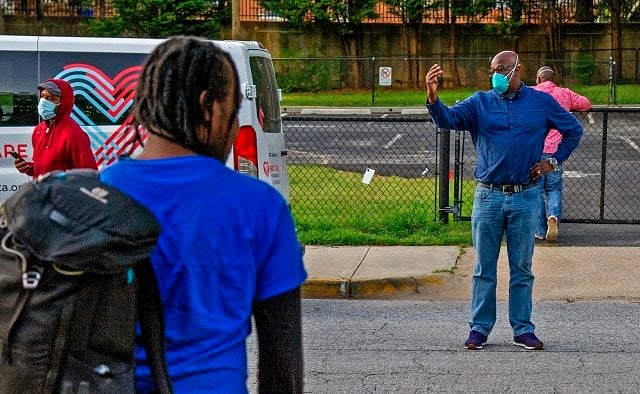 The city’s planning and zoning director said during the meeting that the city’s first approach is always to offer help to homeless people who may be living in public spaces.

Staff recommended an ordinance due to “an abundance of urban camping occurring throughout the city of Tucker in public places and on private property,” according to a memo. Urban camping is defined as any living arrangement, sleeping, cooking, or storage of personal property in a public place.

Because the ordinance would cover benches and sidewalks, there are exceptions. Medical emergencies, sidewalk cafes, waiting outside of a box office or store, and children waiting in strollers are not considered urban camping.

An urban camping ban would give DeKalb County police the right to first issue a warning and second issue a citation or make an arrest those in violation of the ordinance. Urban camping on private property is not part of the proposed ordinance.

Smith said the ordinance sets some standards for what is considered urban camping, and it also creates a formal process. “If it’s city property, the city can reach out to the police department in terms of that trespassing and work it that angle. But if it’s a railroad right of way, or under a bridge, it’s a little bit more challenging as to who has jurisdiction and who’s going to follow the process to take care of it, and to help that person,” she said.

City councilmember Anne Lerner said, “This is just one tool in a comprehensive toolbox and plan that we need to address homelessness… This is an issue of mental health, and services being offered that are perhaps not being taken [advantage of].”

Lerner, who talked to police chiefs in Brookhaven and Chamblee, said the homeless population is moving to the suburbs because the city of Atlanta is too dangerous, and services are not available due to the COVID-19 pandemic.

Lerner said the ordinance is not just about police enforcement.

“I have seen our DeKalb County police officers pay for shelter for people. They have offered to take them places. They have established relationships to help them,” Lerner said.

Two MARTA bus shelters in Tucker are currently being lived in by urban campers, leaving those waiting for the bus in the rain, said Lerner. Tucker Summit CID landscapers are unable to mow beneath some bridges due to biohazards from human waste and drug needles.

“It’s a delicate balance. We want to help these people. We want to offer services. We also want to protect our businesses,” Lerner said, adding that residents’ kindness toward Cheryl, a homeless woman who lives outside a former Folks’ restaurant, is preventing her from getting medical help.

– Mayor Frank Auman thanked outgoing DeKalb County Commissioner Nancy Jester for her support of the city, parks, and CARES Act funding. Jester said, “I’ve enjoyed working with all of you. You’re doing amazing things for the city of Tucker, so please keep it up… It was my honor and privilege to serve you.” Robert Patrick will take Jester’s office in January 2021.

– City engineer Ken Hildebrandt presented a $4 million plan on resurfacing 58 streets in Tucker, from most to least urgent. In February 2021, the council will vote to execute the final plan.

– A $4.9 million plan to make Fitzgerald Field into a destination for sports tournaments, concerts, and events is underway according to Parks and Recreation Director Rip Robertson. The Keck and Wood engineering firm plans to transform the space in three phases, over the course of three years. Construction plans will be presented in early 2021 for the council’s approval.

– Council unanimously passed a contract with Atlas to oversee the completion of an intersection outside of Smoke Rise Elementary, at Hugh Howell Road and Flintstone Drive. The project management contract is for $86,850.

– A resolution passed to appoint Brian Anderson prosecuting attorney of the municipal court of Tucker. Anderson’s role as city attorney will not change.