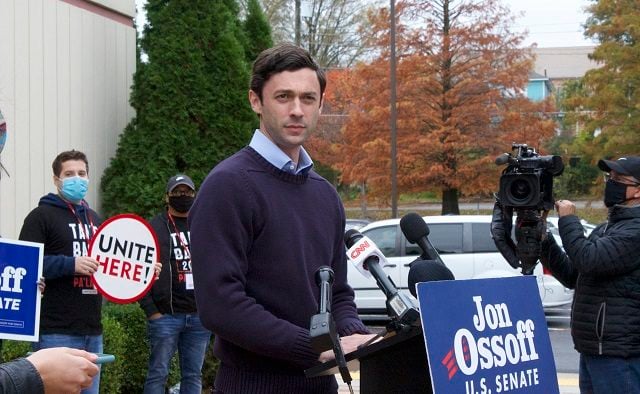 U.S. Senate Democratic nominee Jon Ossoff held a press conference on Nov. 30 outside the IBEW building in Atlanta. He spoke to reporters about incumbent Sen. David Perdue trading stocks during the COVID-19 and addressed insider trading allegations against Perdue. Ossoff also has stock investments and promised that if elected he would put those stocks in a blind trust on day one. Photo by Zoe Seiler.
Share

On Saturday, Nov. 30, Ossoff held a press conference outside the IBEW building in Atlanta to discuss the news of Perdue selling more than $1 million worth of stock in Cardlytics, the financial company where he once served on the board, according to the New York Times.

In the spring, investigators at the Justice Department were conducting a broad review of Perdue’s trading around the beginning of the coronavirus pandemic for potential evidence of insider trading, the New York Times reported.

“He was dumping shares in Cardlytics in January after what appeared to be private conversations with senior executives of that company. As we know he was buying shares in manufacturers of vaccines and medical equipment and dumping his casino shares while he had access to classified briefings on COVID-19 and was claiming in public that this disease was no deadlier than the flu,” Ossoff said.

The timing of the contact prompted scrutiny from investigators but ultimately no charges were filed and they concluded that the message did not contain any meaningful nonpublic information, according to the New York Times.

The Associated Press also reported that “there is no definitive proof that Perdue acted on information gained as a member of Congress or through his long-standing relationship with company officials.”

Ossoff added that the reporting by the New York Times, the Associated Press and other outlets shows a pattern of misconduct in self-dealing by the senator.

“He aggressively traded stocks in the financial services industry while he sat on the banking committee,” Ossoff said. “As he took the chairmanship of the sea power subcommittee for the Senate Armed Services Committee he was trading stock in a defense contractor to which he then directed taxpayer dollars before cashing out at a profit.”

Ossoff also claimed that Perdue has been lying to the public and the press about his finances and that Perdue has claimed he doesn’t have control of his day-to-day stock trades; however, federal agents obtained banking records that show Perdue personally instructed stock trades, Ossoff said.

“For Georgia’s senator to be profiting from a pandemic about which he is lying in public, downplaying the risk while he trades medical stocks and then lying to the people about his own financial misconduct, is totally unacceptable,” Ossoff said.

Perdue needs to answer questions, Ossoff said, about why he said he has no role in trading stocks, about the private conversations he had with Cardlytics senior executives and about other stock trades he directed after attending COVID-19 briefings.

“This is not just about Sen. Perdue’s personal misconduct and his lying about his financial dealings,” Ossoff said. “It’s about the fact that he’s been holding up relief for the very people he serves while enriching himself in office, opposing $1,200 stimulus checks for ordinary, working Georgians, obstructing long-overdue financial relief for Georgians since midsummer that’s been awaiting passage by the U.S. Senate while he’s been looking after himself.”

Ossoff also has personal stocks and he criticized Perdue for not putting his stock portfolio in a blind trust.

“On day one I will place my stock portfolio in a blind trust. Sen. Perdue still refuses to do this by the way,” Ossoff said.

He additionally mentioned a need for legislation that would ban members of Congress from trading individual stocks, calling this action unethical and a huge conflict of interest.

Ossoff called for this legislation over the summer after Perdue and Sen. Kelly Loeffler traded stocks shortly after receiving a confidential briefing on the COVID-19 pandemic, 11Alive reported. Ossoff wants a bill requiring all federal officeholders put their stock portfolios into a blind trust, this would include members of Congress, ambassadors and the president.

Decaturish reached out to Perdue’s campaign but has not received an immediate response.

Perdue spokesperson John Burke told the Associated Press that the senator has been cleared of wrongdoing.

“The bi-partisan Senate Ethics Committee, DOJ and SEC all independently and swiftly cleared Senator Perdue months ago, which was reported on,” Burke told the Associated Press.