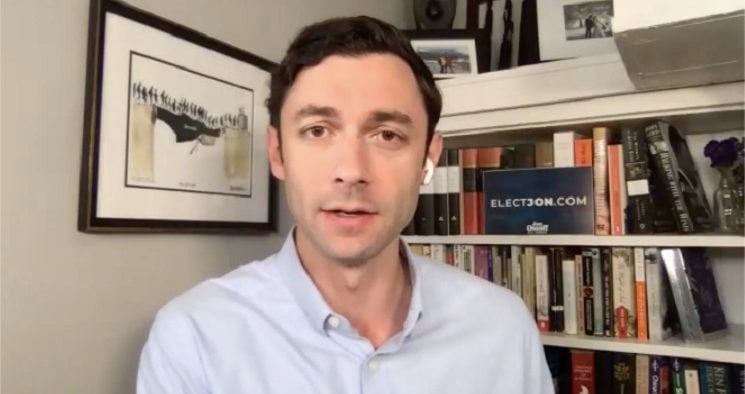 U.S. Senate Democratic nominee Jon Ossoff hosted a virtual press conference to respond to the news of incumbent Republican Sen. David Perdue not participating in any debates with Ossoff before the Jan. 5 Senate runoff election. Photo by Zoe Seiler.
Share

For more information about how to vote in the Jan. 5 runoff elections, click here.

Atlanta, GA – Incumbent Sen. David Perdue and his opponent in the Jan. 5 U.S. Senate runoff election, Jon Ossoff, were set to debate on Dec. 6 hosted by the Atlanta Press Club; however, Perdue has said he will not participate.

Perdue, who is a first-term Republican senator, previously forced the cancellation of a debate on Channel 2 Action News just before the general election to attend a rally with President Donald Trump, according to the Atlanta Journal-Constitution.

“The people of Georgia deserve an open debate. They deserve to hear from their senator and if Sen. Perdue doesn’t want to answer questions in public or debate his opponent, that’s fine, he just shouldn’t run for re-election to the United States Senate,” Jon Ossoff said at a press conference on Tuesday, Nov. 17.

The people deserve to hear from the senator, Ossoff said multiple times during the press conference.

“He has an obligation as our senator to be transparent and accessible and to answer questions in a public debate,” Ossoff said.

Ossoff added that Perdue doesn’t want to publicly explain why he and other senators have not passed additional COVID-19 relief since the summer and why he has downplayed the virus as nothing deadlier than the flu.

“He should come out of hiding and debate his opponent and give the people of Georgia the opportunity to hear directly from their senator ahead of this Dec. 14 early vote period in the Jan. 5 runoff election,” Ossoff said.

The candidates previously debated twice, including a debate in Savannah, Ga., and it was the third and final debate that Perdue canceled before the general election. The debate in Savannah focused on COVID-19 and health care, the Gwinnett Daily Post reported.

“Well remember that when we debated in Savannah Sen. Perdue couldn’t answer why he voted four times to repeal protections for pre-existing conditions; why he lied to us and said COVID-19 was no deadlier than the flu; why he was buying medical and vaccine stocks while telling us that the risk to our health was low,” Ossoff said.

In a statement, the Atlanta Press Club said it is disappointed that Perdue has decided not to participate in the debate.

Ossoff has confirmed his participation and Perdue will be represented by an empty podium, the statement says.

Perdue campaign manager Ben Fry told the AJC that “he saw the runoff as an ‘extension’ of the general election phase, which already featured two debates, as he made clear the Republican wouldn’t participate in any other showdowns.”

The Rev. Raphael Warnock and incumbent Sen. Kelly Loeffler are also facing off in the Jan. 5 runoff election. Both candidates have also been invited to the Atlanta Press Club’s debate.

On “The Ingraham Angle,” Loeffler told Fox News that she welcomes another debate with Warnock after the Democratic nominee challenged her to three such forums.

Decaturish reached out to Perdue’s campaign and did not receive an immediate response.

Ossoff’s message to voters who are trying to figure out how to vote in this runoff election is to make a plan to vote early or request an absentee ballot now.