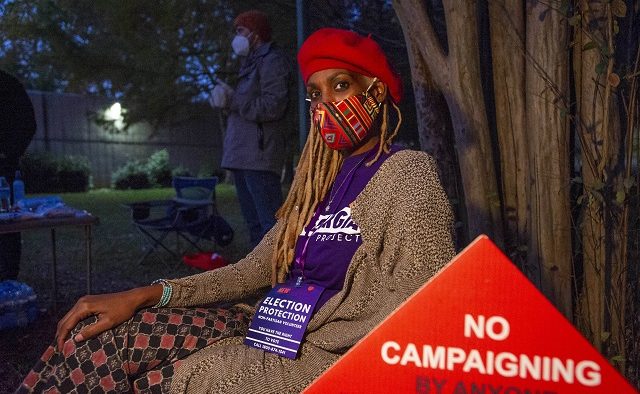 DeKalb County, GA — Election Night ended with Georgia being too close to call for either President Trump or Joe Biden.

As of 8:32 a.m. on Nov. 4, two of the state’s largest and most Democratic counties – DeKalb County and Fulton County – have not completed counting. There’s no clear answer on how many votes are left to be counted in these counties. If it’s more than Trump’s lead, it’s very likely the state could swing in Biden’s direction.

Baoky Vu, a member of the DeKalb County Board of Registrations and Elections, said there are “likely” 90,000 votes left to be counted in DeKalb County.

According to Atlanta Journal Constitution reporter Greg Bluestein, at least one top Democratic official believes the votes for Biden are there.

There are plenty of votes outstanding in R counties too — I’m looking at you, Jeff Davis County – but aside from Houston County they are smaller, rural places without a lot of votes to give. I asked a top Georgia Dem an estimate of how many Dem votes were left. A: Enough. #gapol

An initial analysis from the AJC also says there are 239,000 absentee ballots that haven’t been counted, and estimated “tens of thousands of votes” haven’t been counted in DeKalb County and a burst water pipe had delayed counting in Fulton County. The AJC later updated those numbers with a new estimate showing a minimum of 236,549 votes remaining statewide, of which DeKalb County has 46,441 outstanding and Fulton has 63,778.

Translation: Hang in there. It’s going to get tighter in GA #gapol

Reporter Joe Ripley with 11 Alive indicates there may be some fluidity to the number of remaining votes in DeKalb County.

UPDATE: Dekalb County’s elections director just told me they’re still working on getting a final count of outstanding absentee and provisional ballots. They expect to have them sorted and counted by the end of the day #gapol #Election2020 #11Alive @11AliveNews

Decaturish will be following up on this story throughout the day.