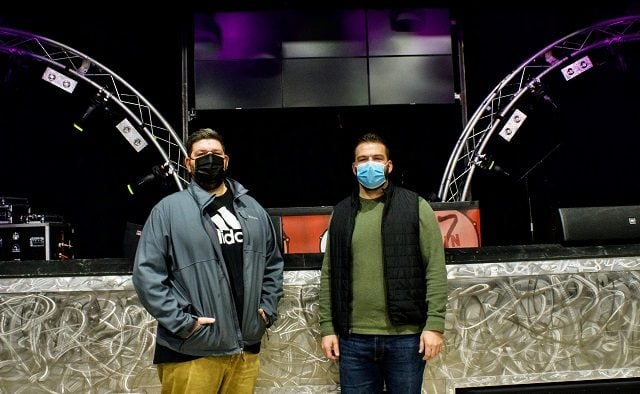 David (left) and Joe White (right) established 37 Main with their brother John in 2008. The Avondale location opened in October 2020 and the brothers are working to provide a safe event space amid the coronavirus pandemic. Photo by Zoe Seiler.
Share

Avondale Estates, GA – The historic Avondale Estates’ Towne Cinema reopened in October after being closed for 22 months. The building is being leased by 37 Main which runs other rock cafes in Buford and Gainesville, Ga.

The brothers said they are trying to present live music in a safe environment which is a tough thing to do during the coronavirus pandemic.

“Upon entering we require masks. We require masks all the way until you get to your seat,” Joe said. “If you’re eating or drinking you can have your mask off. If you’re going to the restroom, if you’re up and about, you need to wear your mask. We have no general admission areas. Everything’s seated so that keeps that shoulder to shoulder part that people fear about concerts completely out of it.”

Audience capacity is restricted to 198 tickets for an event. The building’s total capacity is 600. Tables are spaced six feet apart. They also have a limited number of masks available at the box office. Hand sanitizer dispensers are available throughout the building.

“Obviously you’ve got to be intelligent about how you present which I feel like we are. Live music saves souls too. We’re just really, really excited to be in this area and the potential of what it can be,” Joe said.

Avondale Estates City Manager Patrick Bryant said the city has received emails inquiring about the events being held in the space and he said the business legally is allowed to hold live shows.

“I’m pretty sure they serve food which allows them to operate at full capacity if they want to, and this is not full capacity,” Bryant said. “We don’t have anything on the books that we can enforce. After reading the governor’s order, I don’t believe they’re in violation of that either. They are legally able to operate under those conditions.”

The brothers have a passion for food, music and a good atmosphere. They want customers to feel at ease.

“(We) wanted to give people a quality place to go. That’s one thing people do know about our spot. No matter where we’re at, they know it’s going to be a quality, safe, good spot to go and just hang out and have fun. That’s what we were looking for,” David said.

Their goal is to have big acts visit when they’re touring but also provide a space for local bands as well.

“Getting into this, we were doing other things. I was playing minor league baseball for the Seattle Mariners and we had an opportunity in Buford down there on Main Street and we took it over. Within three months we had to expand. It grew pretty fast. We definitely filled a void in the area,” Joe said.

“We kind of created it out of necessity, of having an idea of a place that people would like to go,” Joe added.

The Whites have mostly booked cover and tribute bands in their original two locations and the Avondale location. Last weekend, a Prince tribute artist, who is the only Prince tribute authorized by the Prince Estate, performed in Avondale.

The Whites were approved for a conditional use permit in December 2018 and wanted to get into Avondale because the city is growing.

“(We) saw an opportunity with the history of this building and wanting to bring that back. We got really excited about that opportunity to be honest with you, and bring great shows back to this area whether that be comedy, live music, plays, everything will be done here. If it’s entertaining it’ll be housed here,” Joe said.

Towne Cinema is a landmark in Avondale Estates. The cinema was constructed in 1925 and served as Avondale Estates post office and city hall. It became the Avondale Theater in 1938. According to some research provided by the building’s owner, the theater entertained audiences with wrestling, boxing and, of course movies.

Over the years, it’s been used as a private residence. Before reopening in 2015, it had been most recently used as the Nickel & Dime Recording Studio. Legend has it that Elvis Presley performed at the theater in its heyday.

Even in pre-pandemic times, the Towne Cinema building has struggled to be profitable.

Tony Longval, a roadie turned entrepreneur, reopened the historic Towne Cinema building in 2015. Prior to that, it had been vacant for several years. But Longval had trouble turning a profit running the space and eventually closed the theater again.

David and Joe said they changed everything in the building from the air conditioning to the electrical system to opening up the event space by completely gutting the interior and doubling the seating capacity. 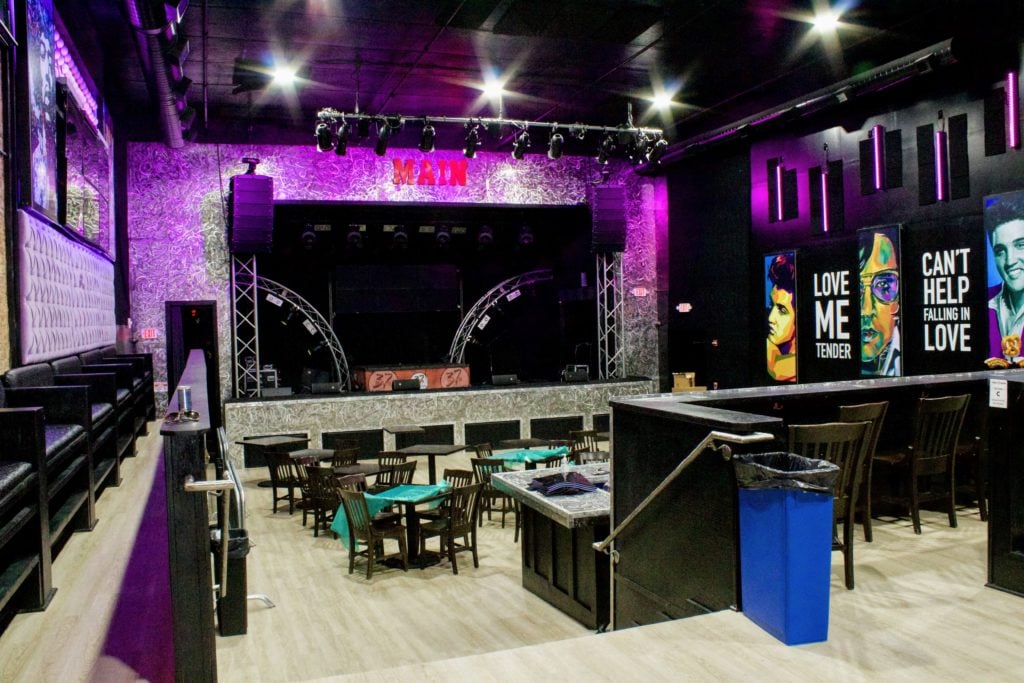 37 Main owners Joe and David White renovated the interior of the Avondale Towne Cinema to open up the space and doubled the capacity of live shows. They added a balcony, two bars and a band room on the back side of the stage, among other renovations. Photo by Zoe Seiler.

The main stage has a main seating space, a bar that serves snacks and is surrounded by additional seating. Joe said that the only area to see a performance previously was right in front of the stage. They also added a balcony that has another bar and a private bathroom.

They installed a new sound and lights system and added a band room to the back of the stage.

“We pretty much redid the inside with some of the stories that we’ve heard (about) the history of the…artists who have recorded here,” David said.

The brothers’ goal is to become a boutique high-end performance space in a similar fashion to the Ryman Auditorium in Nashville, a small event space that holds high regard and draws many artists.

David added they also want to be a place where artists just stop by and play.