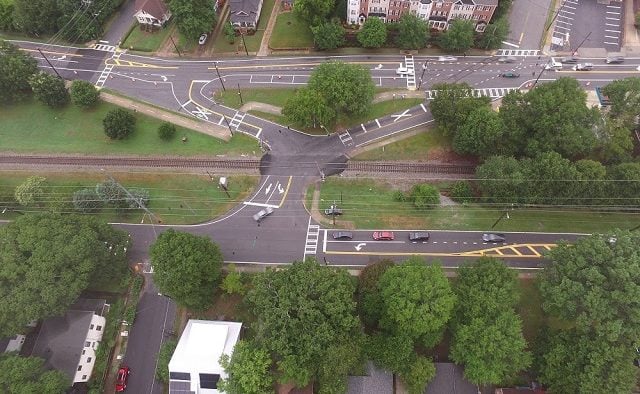 Decatur, GA — The city of Decatur held a Virtual Open House and Workshop on Dec. 9 to discuss plans for improvements to the railroad crossing intersection at Atlanta Avenue.

The meeting was part of a public engagement and planning process that began in 2018. A series of workshops solicited feedback from the public and stakeholder agencies, which narrowed a number of possibilities down to three alternatives that were presented to the city commission.

In August 2019 the city commission approved the plan known as the Adair crossing extension which will extend Adair Street from West Howard to West College Avenue.

The next step was to seek public feedback on pedestrian and bicycle priorities, streetscaping and landscaping, and traffic calming for the selected plan, but that process was delayed due to the pandemic.

Decatur Deputy City Manager Hugh Saxon said of Wednesday’s meeting, “We originally scheduled this for March 2020 just as COVID-19 hit so we’ve lost about eight months in the schedule.”

Pedestrian and bicycle alternatives for the railroad crossing include one with a shared-use path on the west side of Adair only. Another proposed configuration has on-street bike lanes and separate wide sidewalks for pedestrians on both sides of Adair, with possible sidewalk extension to the Olympic Place intersection. A third possibility is dual shared paths for pedestrians and bicycles on each side of Adair.

Theo Petritsch, Director of Transportation Services at Landis Evans, described traffic calming measures including the configuration of bicycle lanes on Howard Avenue. One possibility would be to add a separate buffered bike lane on each side of Howard Ave; another is to add a two-way bike lane on one side only. The design aims to preserve parking for the Atlanta Friends Meeting House and others who regularly park on the street.

For both the railroad crossing section and any added bike lanes along Howard, there will be access points to the shared path that runs along the south side of Howard.

John Boudreau, who is a senior project director for Atkins, said that the project would use the City of Decatur’s existing streetscape design elements. For areas that will no longer be used as lanes for traffic, one possibility is to create a striped shoulder and streetscape with the planters currently in use, which are colorful but not universally beloved. A second possibility would be to use terracotta planters which would be more moveable. A third approach would be to relocate the curb and remove asphalt to add landscaping. A parklet will be created in the recovery area along the existing shared-use path, and additional landscaping can be added along College Avenue. Possible enhancement elements include water fountains, bike racks, trash and recycling receptacles, and art.

Recordings of the meeting, updates, and answers to compiled questions from attendees will be posted on the city of Decatur website.