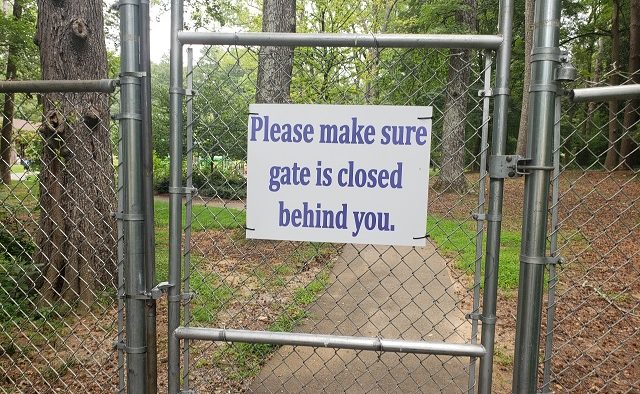 The city of Avondale Estates recently removed a lock from a gate in a fence separating Willis Park from The Museum School. The move is intended to make the city more welcoming. Photo by Dan Whisenhunt
Share

Former commissioner Adela Yelton introduced a resolution in December 2019 for the city to participate in the Welcoming America program.

Welcoming America is a non-profit, non-partisan organization that supports many diverse communities. The organization provides the roadmap and support communities need to be more inclusive, Decaturish previously reported.

The resolution created an Ad Hoc committee which members were appointed to in September 2020.

Welcoming America has seven framework categories. At the Sept. 16 meeting, Commissioner Lionel Laratte highlighted the three he thinks the committee should focus on: government leadership, civic engagement and connected communities.

“These three are where I think we can make the most impact over the next year or so because, I think to some extent, we have actions in place that are ongoing that are taking care of things like economic development, the safe communities with the police, we have that in action as well,” Laratte said at the Sept. 16 meeting.

The other categories are equitable access, education, economic development and safe communities.

The group is focusing on two audiences. The external audience: that encompasses neighboring communities, those who travel through the city, friends and family of residents and potential new residents.

They are also focusing on current residents, business owners and areas that have been annexed into the city.

Welcoming Avondale Estates has met for a couple of months and are creating their strategies and initiatives, as well as beginning to execute them.

“What our goal is, is to be a welcoming and inclusive community and I believe the Board of Mayor and Commissioners has decided that we wanted to take all efforts to make sure that our community is a community that is inclusive and welcoming to residents, as well as the communities around us,” said Bryans, who is the committee chair.

Their strategy right now is aimed at reaching out to longtime residents and new neighbors.

“Most of our strategies are things within the community, and also we feel like if the people in the community feel like they’re welcome and a part of things then they’re going to be our best advocates for reaching out to people outside,” Bryans said.

They plan to provide a resource of information for newcomers to share opportunities within the city, according to their plan posted on the city website. This includes a welcome packet with information relating to the city with things like garbage collection, as well as how to join various clubs and organizations.

“We’re planning to start with Stratford Green and Berkeley Village since they have been annexed in recent times, and the general feel I have gotten (is) that they don’t feel part of the community so much. We plan to deliver the packets personally,” Bryans said.

She hopes the committee will get a better idea of how welcome people feel in the city as they reach out and connect with residents.

“I like the fact that you talked about Berkeley village and Stratford Green but also you get those same comments from folks that live in Avonwood or Majestic Acres, or anywhere else that’s not historic Avondale per se. I think breaking down some of those barriers is important,” Mayor Pro Tem Brian Fisher said.

Another strategy is to encourage people to find informational, entertaining and relevant items about the city like through the group’s Facebook page.

Krost is handling communications for the committee and he has conducted interviews with city representatives to provide more information about local boards and organizations.

“So far I did two (interviews). One with the Community Club, Louise Belline and Dave Deiters of the DDA. The point is we want to broaden civic participation. I think there’s a small group of longtime residents that are the core of civic participation. We want to open it up to people who have newly moved in, to people who live outside the community to find out about all of these boards and maybe want to participate, maybe get to know more about the government,” Krost said.

The goals of the interviews are to raise awareness about the boards, provide information about the city and the function of the boards, and broaden civic participation.

The committee members will also make sure messaging and communication from the city is welcoming and in line with their priorities. This would include a review of the language of the city’s policies and communication and include installing welcoming signs at entry points to the city and local parks.

Specific messaging and placement of the signs have yet to be determined.

The commissioners and the mayor thanked the committee members for their work and appreciated their enthusiasm in volunteering to make the city more welcoming and inclusive.

“The way that I see this committee being successful and how we can measure how successful the committee is, is by seeing how it helps sustain the development that we’re doing,” Commissioner Lionel Larratte said.

Laratte and Commissioner Dee Merriam took the lead over the committee after Yelton left the board in December 2019.

Another goal of the committee is to bridge the gap between generations in the city and Laratte encouraged the members to put just as heavy an emphasis on that as they do on welcoming.