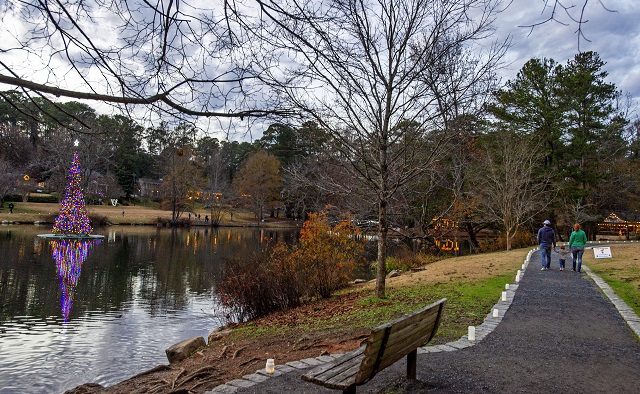 The floating Christmas tree reflects on Lake Avondale as people walk by on the night of the Avondale Estates Christmas Tour of Lights on December 13, 2020. Photo by Dean Hesse.
Share

Avondale Estates, GA — The Avondale Estates City Commission at its Dec. 14 meeting considered an ordinance to reduce the number of public readings of new legislation.

The ordinance would reduce the required readings from three to two, and in some cases, to one if commissioners unanimously agree to put it to a vote. Consent to a vote will not imply a vote for the ordinance.

Mayor Jonathan Elmore said the changes do not prevent the board from slowing down the process when necessary.

“I think the majority of things we do don’t need three readings, they only need two readings or one. Others might need five,” said Elmore.

Commissioner Brian Fisher said that the necessity to get items done before a time limit sometimes led to meetings at odd times that gave the impression of trying to avoid public comment. He said that he believed changing the meeting schedule and reducing the number of readings would aid transparency while allowing the board to work efficiently.

“We have a lot on our plate. How can we do things so that we can maximize public input but still get things done?” said Fisher.

Commissioner Lisa Shortell said that the current process was created before digital communications and that because proposed ordinances were posted on the city website, commissioners often received public comment via e-mail before the first reading. Shortell added that the proliferation of called meetings created extra work for staff and was hard on everyone. She said that under the new meeting schedule, the commission will have two weeks between a work session and the next meeting rather than only four or five days.

“We have plenty of ways to slow things down if necessary. What we don’t have right now is any way to speed things up,” said Shortell.

Commissioner Dee Merriam disagreed, saying that she felt the new meeting schedule would make the decision-making process more efficient and the reduction in the number of required readings should be tabled until later in the year.

“It’s not just a matter of advertising something. It’s a matter of research and allowing people to really get their arms around it,” said Merriam.

The proposed change, following the old process, will receive at least two more public readings with an opportunity for public comment before the commission votes on it.

– Avondale Estates is required to update its comprehensive plan every ten years and that process will begin in January of 2021. Assistant City Manager Shannon Powell said that after a kick-off meeting in January to which the public would be invited, a steering committee will be formed.  After a public engagement process, a public hearing will be held later in the summer to present the results. An update with a timeline and the dates of public meetings will be posted on the projects page on the city website.

– An amendment to remove a prohibition on public works employees removing yard waste generated by landscaping crews and a revision of the existing stormwater ordinance to comply with Environmental Protection Department standards were both approved.

– The Mayor and Commissioners took the opportunity to comment on the end of 2020.

“It’s been a doozy of a year,” said Elmore.  He stated that the city came up with guidelines for wearing masks and social distancing that have been followed by the majority of Avondale Estates residents.

“I’m proud of our citizens. I think as a community we’ve remained really healthy because we’ve been sticking to the rules,” said Elmore.

“This has been a challenging year, there’s no doubt about that,” said Fisher. “Families have become teachers, teachers have had to learn how to teach from home, many of our senior adults have not been able to see family.” Fisher praised the way that city residents adapted to constraints on traditional events and supported each other.

Merriam said she appreciated the support she had received as a new commissioner from other commissioners and city staff, and said that in a year when people could not congregate indoors the city’s green spaces were more important than ever.

“I’m so excited for what we will be doing in the year to come,” said Merriam.

Shortell felt sympathy everyone for the struggles they endured this year.

“To all of those that lost a loved one, got sick, had a business close, lost a job, had to work in a frontline, high-risk, high-stress place or were unable to go to school, my heart goes out to you, you were the ones paying the price in this awful pandemic year,” said Shortell.

Laratte said the year taught him to focus on what really matters.