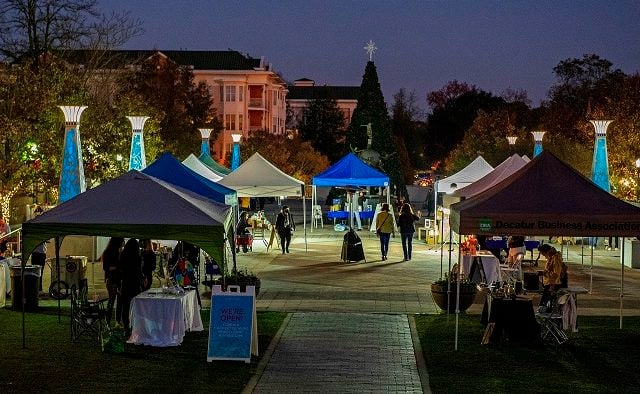 Local retailers set up in tents on the plaza in downtown Decatur during FAB Friday on Nov. 20, 2020. The event is intended to help local businesses. Photo by Dean Hesse.
Share

Decatur, GA — The Decatur Downtown Development Authority (DDA) board has formally agreed to join the city in forgiving the loans made earlier this year to 27 small businesses hurt by the pandemic-related economic downturn.

In October, the city learned that it would receive approximately $3 million in federal CARES Act funding to provide assistance related to the COVID-19 pandemic.

“The city allocated $500,000 of the CARES funding to modify the small business emergency loan program and convert it into a repayment loan program – canceling the loans and forgiving the debts of the business owners,” said Angela Threadgill, the development authority’s executive director. “This resolution formalizes the forgiveness and cancellation of those loans.”

In April, the DDA contributed $100,000 of its funds to a joint program with the city to provide emergency financial assistance to small businesses. The city allocated $400,000. Charitable contributions from different Decatur residents added an additional $63,400 to the fund.

According to the original terms of the loans, repayment was to begin only after the lifting of the emergency orders related to the pandemic, and businesses would have had to repay the money within 36 to 60 months.

Notably, one of the loan recipients has indicated that they still intend to repay the money in the hope that it can be used to help other Decatur businesses, Threadgill said.

“The CARES Act funds would reimburse the city and DDA for those funds while forgiving the loans of the businesses,” she explained. “However, one business owner said that they had done unexpectedly well during the pandemic and they declined to participate in the repayment program. They have indicated that they want to repay the money and pay it forward so that we can put the money into the new grant program.”

In October, the city also decided that it would use the CARES reimbursement to forgive the outstanding loans and still allocate $400,000 to a new small business grant program. At its meeting Friday, the DDA board also formally agreed to also contribute $100,000 to the new program, as well as any funds needed to “bridge” the gap between receiving any repayments (such as the business mentioned above) to maximize the funds available to help.

“The funds for the grants will need to be disbursed before any repayments would have been due,” said Conor McNally, a DDA board member who also serves on the assistance oversight committee that administers the loan and grant programs. “I think it would be appropriate for the DDA to agree to bridge any of those repayments to ensure that they are used for the intended purpose and we actually pay it forward. I would like to have $525,000 available for the grants instead of just $500,000 if that was [that business owner’s] intent.”

The committee is already reviewing applications for the grant program and they have already accepted 45 applications for a total requested funds of about $700,000. In full disclosure, Decaturish has also submitted an application for the new round of grant funding. A blind lottery process similar to the one used for the loan program will be used to select which businesses receive the grants, he said.

The grant amounts will range from $5,000 up to $25,000 depending on the number of full-time employees at each business. In order to be eligible for a grant, a business must be in the city of Decatur and have between 1 and 50 full-time equivalent (FTE) positions.

“We will go through the lottery process that we used in the loan program and then start giving out the money until it is exhausted,” McNally said. “We are trying to finalize it by next week.”

Once the businesses are chosen, they will be notified and need to complete some documentation, so disbursing the funds will likely take through the end of the year and into the first part of January, he said.

In other news, the board also unanimously passed a resolution thanking Board Chair Chris Sciarrone for his 13 years of service to the DDA. Sciarrone was originally appointed in January of 2007 and will leave the board at the end of the month.

“The city and the DDA thank you for your commitment and work to improve the built environment and the economic development of our community,” said Threadgill. “You will be greatly missed.”

A newly appointed member, David Harry, senior vice president of multifamily investments at Preferred Apartment Communities, will join the board at its next meeting in January.

In his interviews with the City Commission, Harry expressed interest in working on affordable housing efforts, Threadgill noted. “With his experience at Preferred Apartment Communities, he clearly has a passion for multifamily housing and will be a great asset to our board.”