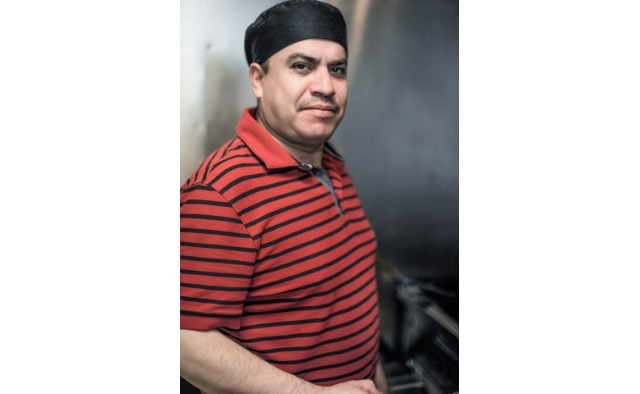 Decatur, GA — Employees at Universal Joint are fundraising for their coworker after he was injured in a shooting on Dec. 19.

Decatur Police are asking for the public’s help identifying a suspect following a shooting that occurred early Saturday morning, Dec. 19.

The victim, identified by workers as a Universal Joint cook named Gerardo, flagged a police officer down at 1:18 a.m., according to the Police Department. The victim had a gunshot wound.

“The victim informed the officer he was stopped for a traffic light while at the intersection of East Lake Drive and Park Place,” the Police Department said. “While seated in his vehicle waiting for the light, an unknown adult male suspect walked in front of his vehicle and fired a single gunshot through his driver’s side window striking the victim. The victim stated the male then fled the area in an unknown direction. The suspect is described as a 40-45 year-old black male, shorter in height, wearing a gray shirt and black stocking cap. If you have any information regarding this incident, please contact Inv. Hensel at [email protected] or 678/553-6687 or contact Crime Stoppers Greater Atlanta at 404 577-Tips (8477) and remain anonymous.”

Decaturish has requested a copy of the incident report.

According to a fundraising campaign launched on Facebook, he has been a cook at Universal Joint for more than 10 years. He had just ended his shift and was driving home to his wife and 11-year-old son when the shooting occurred.

Following the shooting, “He somehow managed to turn his car around and drive back towards Oakhurst Village where luckily he saw a police car and was able to get immediate help. He is currently in the hospital and will be having surgery to remove the bullet lodged in his jaw on Thursday.”

He needs help with medical bills and the organizers also want to do something nice for his son this Christmas. To see the fundraising campaign, click here. It already has surpassed its $10,000 goal and has raised $15,315.

Ana Morales, a waitress at Universal Joint, was involved in a car accident a few weeks ago that claimed the life of her best friend. Morales survived but was severely injured.

That fundraiser hasn’t reached its goal yet and was at $8,290 as of Dec. 21. To see that fundraiser, click here.

Morales’ mother, Oakhurst Market employee Victoria Morales, also had her own troubles this year. She had an emergency appendix removal surgery.

“So, we’ve had a couple of families that have been hit hard this holiday,” Waddy said.