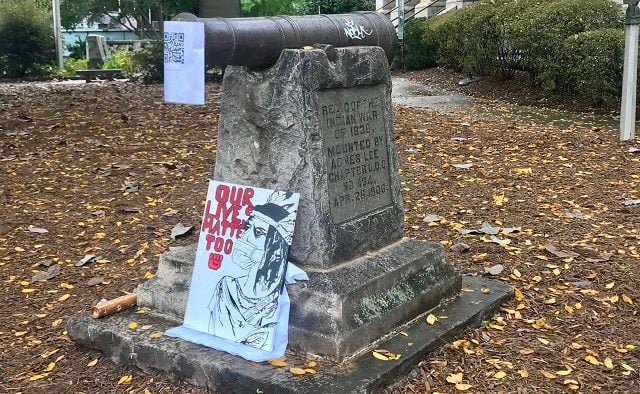 The cannon was placed in Decatur in 1906 by the United Daughters of the Confederacy and memorializes the removal of indigenous peoples following the Creek Indian War of 1836. Photo by Zoe Seiler.
Share

The points being made about the meaning behind the cannon in the city square of Decatur are valid, but before we make our decision as a community about what to do with our cannon, I’d like to share some of the rest that I know about its history. This cannon has played a significant role in Decatur and Atlanta history in addition to its role in the Creek War of 1836.

I agree with what others have said that this cannon should not become a monument to something we wish had never happened, the forced removal of most of the Creeks from the South. It should be viewed as a relic of history though, most of it, history of which no one should be proud. If our goal is to make people understand what happened to the indigenous people who once lived here and the role our town played in their removal, why hide that away? Unlike the “Lost Cause” monument that was once in our city square, this cannon wasn’t created to glorify. It was there and played a role in history. In fact, it is the oldest authentic artifact to have participated in Decatur or Atlanta history that I know of. The only two others that compare are the Zero Mile Post and the Monroe Embankment. The cannon is older than those two and it is connected to important parts of city history other than railroads which, the other two represent.

Like the Zero-Mile post that is now in the Atlanta History Center, it would be appropriate to put the cannon in a museum behind glass with an explanation of its proper context. Personally, I think that would be a shame. The cannon has been out in the open for everyone to see and touch for over 180 years. As a result, it pops up at various points in local history. Unlike monuments, relics like the cannon were there. They took part in what happened. The people who were present for important events in our town (both laudable and shameful ones) touched them, saw them, used them. During all the time the cannon has been in Decatur, anyone could go look at it, talk about it, touch it (sometimes steal it), any time the mood struck them.

The forging of the cannon and the original reasons for it are lost to history so far. We don’t know how old it is or what it could have been used for before 1836. There was no money devoted to the forging of cannons for the incident in 1836 so, it’s very probable its history goes back to the War of 1812, possibly even to the Revolutionary War. The first references we know of it are in the Creek War of 1836 as the engraving below it states. You probably are unfamiliar with that one because it wasn’t really a war. In brief, Creeks in Alabama were making a last attempt to keep the land they still had there and protect it from settlers who were intruding on their property. They destroyed property on their land and sometimes came into conflict with settlers in South Alabama. In May of 1836, the Creeks crossed the border and attacked Roanoke, Georgia near Columbus killing 12 people and entirely destroying the little town.

This led to a call to arms in Georgia to which Decatur responded by sending nearly every man living in the town in a number of different companies. Apart from their overreacting zeal for a conflict, this was a good way for people to earn money on the state’s dime. That partly explains why so many of them responded to the call. The cannon rolled out of Decatur in July 1836 with Ezekiel and James Calhoun, two brothers who were important town leaders. Ezekiel was one of the town’s first doctors and James later became mayor of Atlanta and was the person to whom the task fell to surrender the city to General Sherman during the Civil War.

The DeKalb and Decatur troops and their cannon took part in one battle during the conflict in 1836. James was in charge of the DeKalb Cavalry (while its commanding officer was absent) on July 31, 1836 when word reached the fort in Columbus that a group of Creeks had been spotted camped in a swampy area nearby. The DeKalb Cavalry, which was made up almost entirely of Decatur residents, lit out to find them. They located a few Creeks in the swamp and pursued them. This was a decoy though and the DeKalb Cavalry was outmaneuvered by around 30 Creeks once they entered the swamp. The DeKalb troops were surrounded and quickly ran out of ammunition. Five DeKalb residents were killed. Any deaths or wounds on the Creek side were never reported.

As it belonged to the DeKalb Cavalry, the cannon was probably with them during this small battle. As far as anyone knows, it was never fired or put into position to take part in the battle and that was the extent of any participation by the DeKalb troops in the conflict.

The story for the cannon was far from over though. After it returned from Columbus, it was treated as a well-known, popular heirloom of Decatur in the mid-1800s. They rolled it out to fire it as a punctuation to city celebrations like the fourth of July. It seems like it became a tradition for Decatur residents to have the cannon fired at their wedding. It’s unclear where it was normally kept during this period but from the participation of the cannon in the next chapter of local history, it’s obvious it was well known and kept someplace public, probably outside the courthouse as it is now.

By 1850, Decatur’s unruly, rude neighbor Atlanta had moved in and become a constant source of annoyance to the genteel folks of Decatur. The neighboring town was founded based on building railroads and by 1850 that task had been accomplished and all the people who had been hired for the job were now out of work. Apart from that, the railroads were bringing in a constant stream of visitors. Atlanta was comparable to a wild west town mainly known for gambling, drinking, violence and prostitution.

Mayor Jonathan Norcross was elected that year on a platform to put an end to the debauchery in Atlanta. The more vocal of Atlanta residents (those doing the drinking) didn’t support his planned reforms though. One night in April of 1851, probably after enjoying a long period of discussion in the town taverns, a group of them went over to Decatur and stole the cannon. They brought it back to Atlanta and positioned it in the middle of the road and fired it three times into the front of Jonathan Norcross’ store. The group who did this probably didn’t know much about firing cannons though and instead of shot they filled it only with dirt they picked up off the ground. According to Norcross, the effects were mostly repaired with the use of a broom. The group left a note though, telling Norcross they would put a cannonball in it next time if he didn’t resign his office within three days. The incident could almost be seen as comical if it hadn’t sparked a period of real violence that culminated with a large portion of the city being intentionally burned to the ground.

Guards were stationed around the cannon the next day. The group opposing Norcross and his reforms started up their opposition in the bars. Violence intensified, mostly to widespread fistfights until Norcross was forced to call out a volunteer police force that put down the rioters. The whole incident peaked in an incident of “white capping”. People wearing white hoods executed a vigilante raid of the section of town mainly known for prostitution and suspected for many of its crimes. This section was the most diverse in the city at the time but primarily occupied by lower-class white people, many of them Irish. The armed vigilantes invaded homes, beat people in the street, threw all of them out of town and then burned down their neighborhood known as Snake Nation.

After this incident, the cannon found its way back to Decatur and was still kept in public and rolled out on public occasions. When word arrived in July 1864 that Sherman was on his way to take the city, Decatur residents removed it and buried it in a secret location to avoid it being confiscated by Union troops. The ploy worked and the cannon was dug up after the war and placed again in public.

In 1906, it was mounted in its permanent spot where it is now.

I’m very proud of our community for having this discussion around the cannon. As a historian, my ardent wish is that we try our best to understand how we got to where we are today and the road we traveled to get there. I also wish for that knowledge and discussion to be out in the open and up for anyone to openly participate as we have been, not relegated to a history lesson. When we put things away in museums and books, they become less accessible, less real and tangible. After having been present in so much of our history, I see the cannon as a valuable tool to connecting people to our history. This way, our shared history becomes part of our present and something we feel qualified to comment on as we are now. Sometimes, relics of the world’s past mistakes are intentionally left in the open to remind us of our fallibility and guard ourselves against it. I certainly agree though that if the presence of historical artifacts like these out in the open makes some people in our community feel less a part of it now, effort should be made to correct that. It’s sometimes a difficult decision.

PS: I’m not writing this to promote any books, but in order to establish some credibility and explain why I happen to have all this research, I am the author of a history book, “Native Decatur” and have another one coming out February 8, 2021 called “Hidden History of Old Atlanta”.