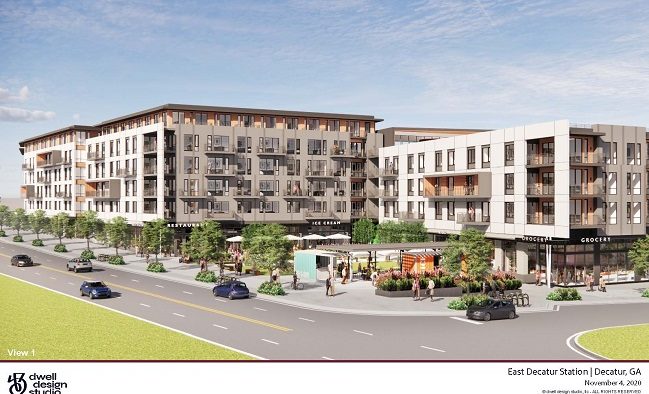 A conceptual drawing of what the new mixed-use development planned for the current East Decatur Station site will look like. The perspective is from College Avenue facing southeast. Image obtained via the city of Decatur.
Share

As reported previously in Decaturish, Charlotte, NC-based developer Northwood Ravin intends to build a 400+ apartment community together with a mix of restaurants, shops and a large co-working space on the six-acre property. If completed, it would be the first residential development in Decatur to come under the city’s new mandatory inclusionary zoning requirements.

“In keeping with Decatur’s ordinance, we will reserve 10 percent of the units for residents with incomes at or below 80 percent of AMI [area median income],” Ben Yorker, Northwood’s vice president for development, said during the meeting. “These units will be distributed throughout the site and across all housing types.”

The area is already zoned for mixed-use developments like this, but Northwood is seeking five exceptions to Decatur’s Unified Development Ordinance (UDO) to enable it to develop the property in compliance with the city’s fire-safety requirements and to build enough units to make the development economically feasible, Yorker said.

– An exception to the parallel parking standards for parking along Freeman Street to allow for space for fire-fighting apparatus to access the development.

– An exception to design standards for the private drive on the property to allow large fire-fighting equipment to access the interior of the development.

– An exception that will allow the leasing office and some residential amenity space on the ground level of the development facing College Avenue. The UDO states that all street-level spaces be commercial space and not residential.

The developers had originally planned to seek an exception to the step-back requirements for the entire development but revised their plans at the request of the Downtown Decatur Development Authority, which reviewed their proposal in August.

The DDA board worked with the Northwood Ravin development team to refine its plans in order to address concerns the board had about the request for the step-back exceptions, Angela Threadgill, the DDA’s executive director, told Planning Commission members.

“The DDA tried to work through the plans before the development team brought them forward to you tonight,” she said. “At its meeting in October, the board passed a resolution recommending its approval with the five exceptions. They felt that this will expand affordable housing opportunities in the city of Decatur, as well as meet the need for more commercial development and employment opportunities in that area.”

There is not much land available for development inside the city and what little is there needs to be “developed smartly,” Threadgill noted. Like the adjacent Cortland development on the former MARTA station parking lot, this will be a dense, walkable development located next to a transit station.

Planning Commission members seemed to agree that the current plans balanced the concerns about the aesthetic impact of a large development with the need for more housing and retail options along that corridor.

“I personally think this is a good proposal for this site,” Commission Chair Harold Buckley, Jr. said. “It is in scale with the development across [Sams] Street and there are a lot of thoughtful design elements that have been incorporated.”

Commissioner Lori Leland-Kirk noted that the inclusion of open-air courtyards and gathering spots that are accessible to the public, particularly one proposed for the corner of New Street and College, would be a welcome change for that area.

“I am also very excited that we will have inclusionary zoning with all the different levels of housing,” she added.

The developer’s request for the needed exceptions will now go before the Decatur City Commission for final approval.