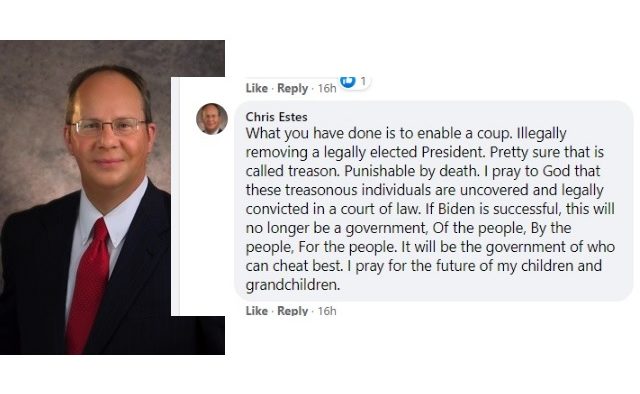 Cole County Assessor Chris Estes is defending a comment he left on Sen. Elena Parent's Facebook page accusing her of treason and saying it was "punishable by death."
Share

Decatur, GA — A Republican elected official in Missouri is defending a comment he made on Georgia state Sen. Elena Parent’s Facebook page accusing her of treason and saying that the crime is “punishable by death.”

Chris Estes, a county assessor in Cole County, Mo., made the comment on Sen. Parent’s Dec. 4 Facebook post regarding the election. The post debunks a conspiracy theory about suitcases filled with ballots being “suspiciously pulled” from under a table, one of many conspiracy theories promoted by President Trump’s supporters in the wake of his loss to President-Elect Joe Biden.

The comments section of that Facebook post has been riddled with threats against the senator – some explicit, some implied – and conspiratorial memes that falsely accuse Sen. Parent of participating in ballot counting in Pennsylvania. (She said she hasn’t visited Pennsylvania in four years.) Sen. Parent, who now chairs the Senate Democratic caucus, was targeted by threats and doxxed after she spoke during a Thursday hearing with former New York City Mayor Rudy Giuliani, President Trump’s lawyer and a purveyor of election-related conspiracy theories. She’s received increased police protection as a result.

Estes’ comment, confirmed by a relative who answered his home phone on Monday, Dec. 7, disappeared Monday morning after Decaturish began inquiring about it. The comment had reappeared as of Monday evening.

Estes’ comment on Sen. Parent’s page says, “What you have done is to enable a coup. Illegally removing a legally elected President. Pretty sure that is called treason. Punishable by death. I pray to God that these treasonous individuals are uncovered and legally convicted in a court of law. If Biden is successful, this will no longer be a government, Of the people, By the people, For the people. It will be the government of who can cheat best. I pray for the future of my children and grandchildren.”

Here is a screenshot of the comment taken before it was removed: 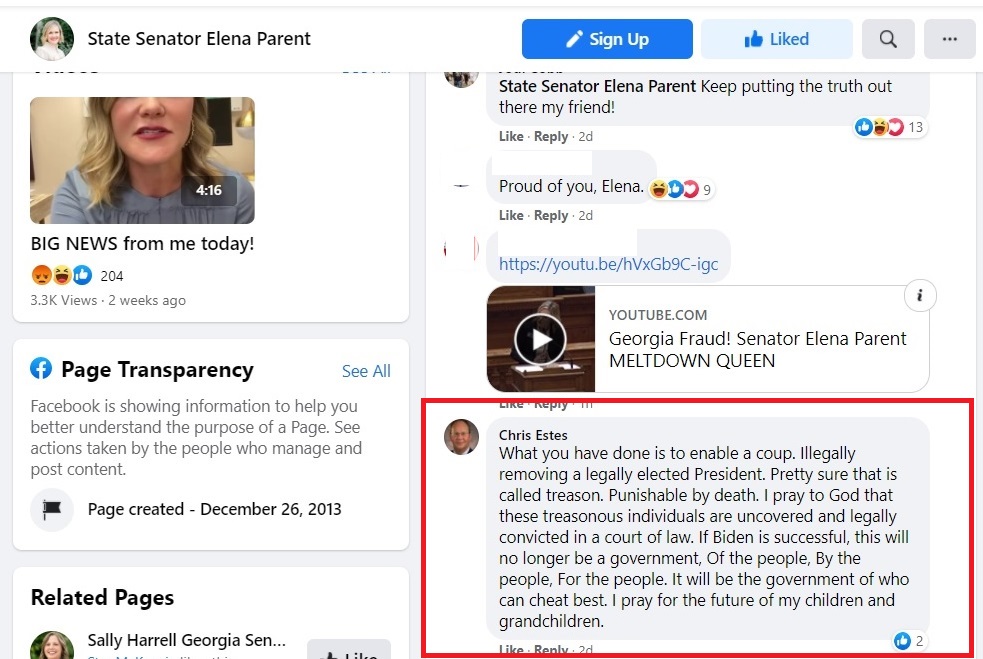 After seeing the comment Saturday morning, Decaturish contacted the Jefferson City Police Department in Cole County to make them aware of the assessor’s message to Sen. Parent. A family member speaking on Estes’ behalf said he did not threaten Sen. Parent.

Through his family member, Estes said, “Just because I became an elected official, does not negate my rights in the First Amendment. I believe it makes me more responsible to speak when it appears the law has been broken, and I would never call for violence or injury to anyone. I would call upon the legal justice system to do its duty to determine guilt or innocence.”

When told that Estes did in fact accuse Sen. Parent of committing treason, his family member hung up the phone.

Jefferson City Police did contact Sen. Parent, but she said she considered the message more harassment and intimidation than a threat. She’s seen worse since the hearing with Giuliani. But it is concerning that it is coming from a Republican elected official, she said.

“It’s very concerning on multiple levels that he’s buying into this narrative unquestioningly and that he’s sending [this message] to another elected official,” she said.

Sam Bushman, a Republican and the Presiding Officer of the Cole County Commission, said he forwarded Estes’ comment along to the county commission attorney when he received the screenshots from Decaturish. He notes that Estes is no stranger to controversy. Estes was previously charged with assault after he allegedly punched his neighbor over a property dispute, according to a TV station covering Cole County. That charge was later dismissed.

Bushman, who notes that he “doesn’t do Facebook,” said Estes is “his own worst enemy,” while noting that many Republicans have had a tough time accepting that Donald Trump lost.

“This election has stirred up so much turmoil and to me, it’s over,” he said.

Joshua Dunne, chair of the Cole County Democratic Central Committee, said there’s no evidence of a coup, treason, fraud or anything else that would change the results of the Nov. 3 election.

“We do not support an elected official in our county calling for the death of anyone,” Dunne said. “It’s ridiculous to me we are at this place of divisiveness in our political landscape, and we need to remember we are people first.”

Sen. Parent said she felt blindsided by Thursday’s hearing and said she would’ve taken more precautions ahead of time if she knew Giuliani would be speaking.

“I am distressed that our colleagues blindsided us because it’s put me and my family in danger,” she said. “I could’ve taken some steps to be more careful if I knew I was going to be walking into that level of a storm.”

She said she believes her Republican colleagues do feel remorse about what happened, noting she received calls from Gov. Brian Kemp’s Office and her colleagues in the Senate.

“I don’t know the extent to which it crossed their minds that they were playing with fire,” she said. “I doubt it was top of mind. I’m assuming that’s what it is. I’m giving them the benefit of the doubt. Because I think most of them are good people.”

Georgia Republican Senate Majority Leader Mike Dugan called the threats against Sen. Parent “repulsive” but said the people making the threats bear the responsibility for them.

“I don’t always agree with [Sen. Parent] but we can have a cordial disagreement and I think society as a whole right now needs to get back to that a little bit,” Dugan said. “Just because you and I think differently, it doesn’t mean the other person is evil.”